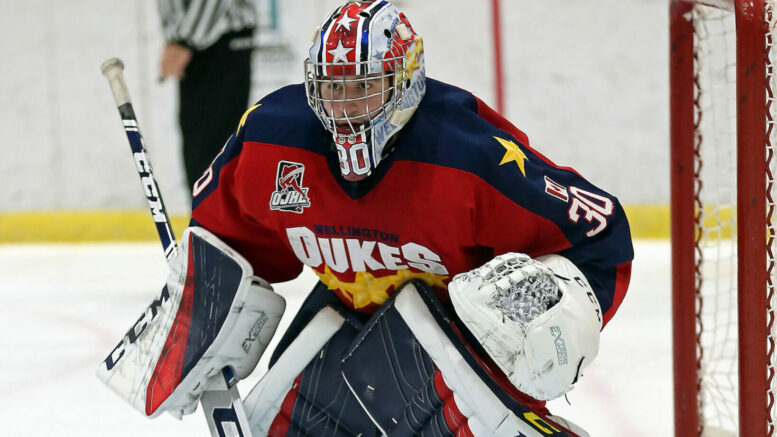 With the offence clicking, the wins keep coming for the Wellington Dukes.

Wellington (35-9-2, 72 points) has scored five goals or more in each of its last five games including three wins this weekend as the club swept up visiting Aurora 6-0 on Thursday, Cobourg 6-2 on Friday and Lindsay 5-2 on Sunday.

With three games in hand on league leading Trenton, Wellington still trails the Golden Hawks by three points but maintains the best winning percentage in the Northeast Conference at .783.

Wellington starts to chew up those games in hand starting Tuesday night in Whitby.

The Dukes managed a white wash of visiting Aurora on Thursday as Matthew Keeley followed up his first Ontario Junior Hockey League shutout Fri., Jan. 24 with another goose egg in his very next start.

The Niagara-on-the-Lake, ON native stopped all 36 Tigers volleys sent his way as the Dukes picked up two points.

The next evening, Wellington played host to the Cobourg Cougars and handled the visitors, scoring two goals in each period for a well balanced attack.

Ben Evans, fresh from a four game hiatus for getting physical with an official, came bursting back into the Wellington lineup by potting a pair including a first period power play tally that opened the scoring at 14:06.

Cobourg’s Erik MacNeil would tie the game at just over two minutes later but it was  Justin Paul’s first as a Wellington Duke with less two minutes left in the opening stanza that ensured the home side went to the dressing room for the first intermission with a 2-1 lead.

In the second, Nick Aromatario’s power play point blast would sneak past Wellington starter Matt Dunsmoor at 5:47 to move the contest back to even at 2-2.

The Dukes would respond with just over five minutes left in the middle frame and put the contest out of reach. 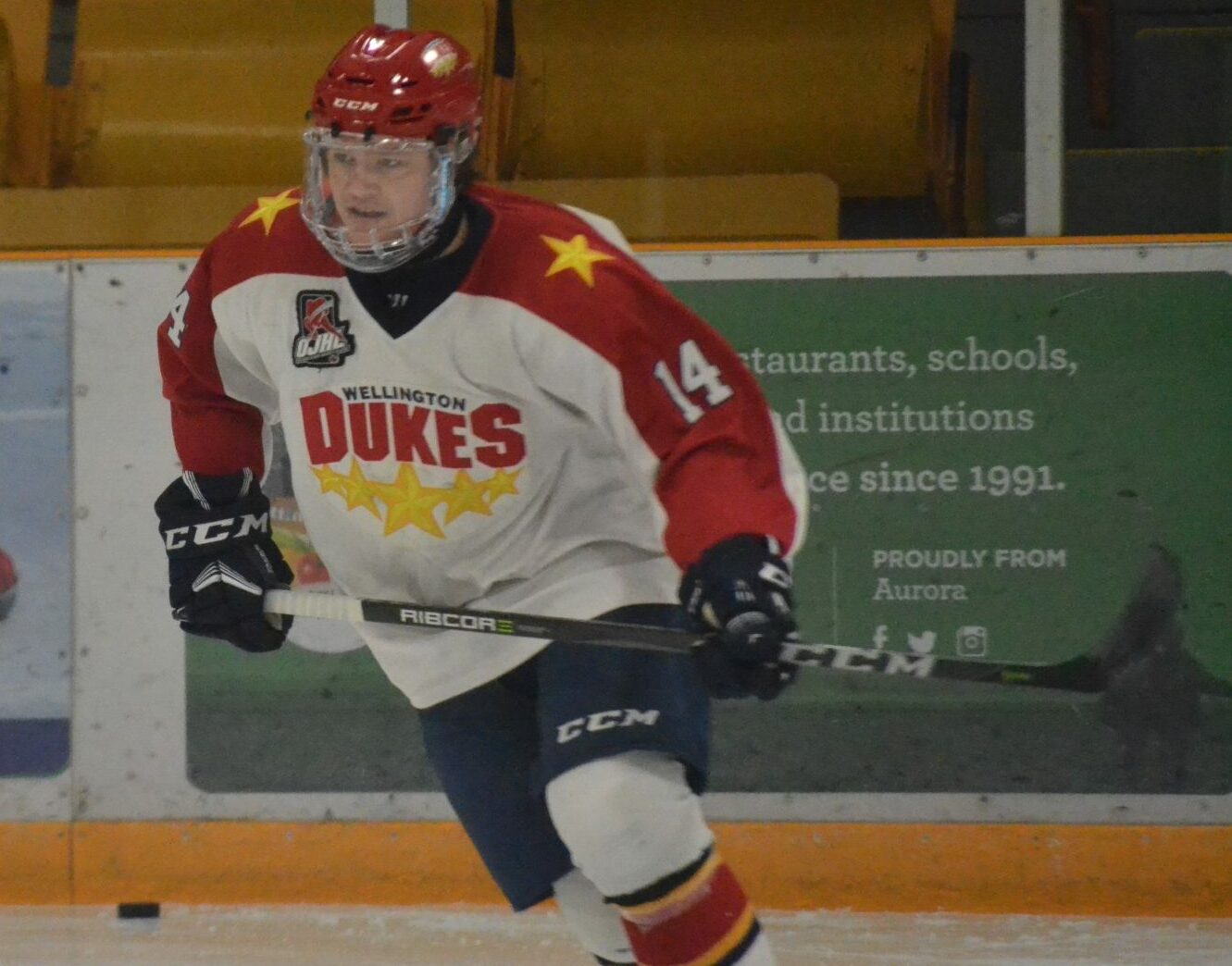 After Wellington was able to keep the puck in at the line, Ben Addison would find Evans at the crease with time and space to tip the puck towards starter Dershahan Stewart.

Stewart would foil Evans’ first attempt but the Thorold, ON native was able to lift the rebound over the prone Cobourg goalie at 14:10 for the game winning marker.

Just 28 seconds later, it was the Wellington combo reciprocating a scoring play as Evans’ pass from behind the goal line to the Cobourg blue line found Addison and the defenceman’s seeing-eye shot snuck past Stewart to make it 4-2 for the hosts.

In the third, former Cougar Brodie McDougall found Humberstone cruising to the high slot and a one timer found its way into the back of the Coburg net at 9:54 then, just under four minutes later, McDougall would cash in with a goal of his own.

Forward Jacob Vreugdenhil earned assists on both Wellington goals in the third period.

Dunsmoor would stop 23 Cobourg shots for his 18th win of the season.

Kelley would be back in the Wellington net on Sunday against the Muskies and the hosts needed to withstand a couple of pushes from the OJHL East Division bottom-feeding Fish in order to overcome the visitors and end the three game weekend home stand on the right note. 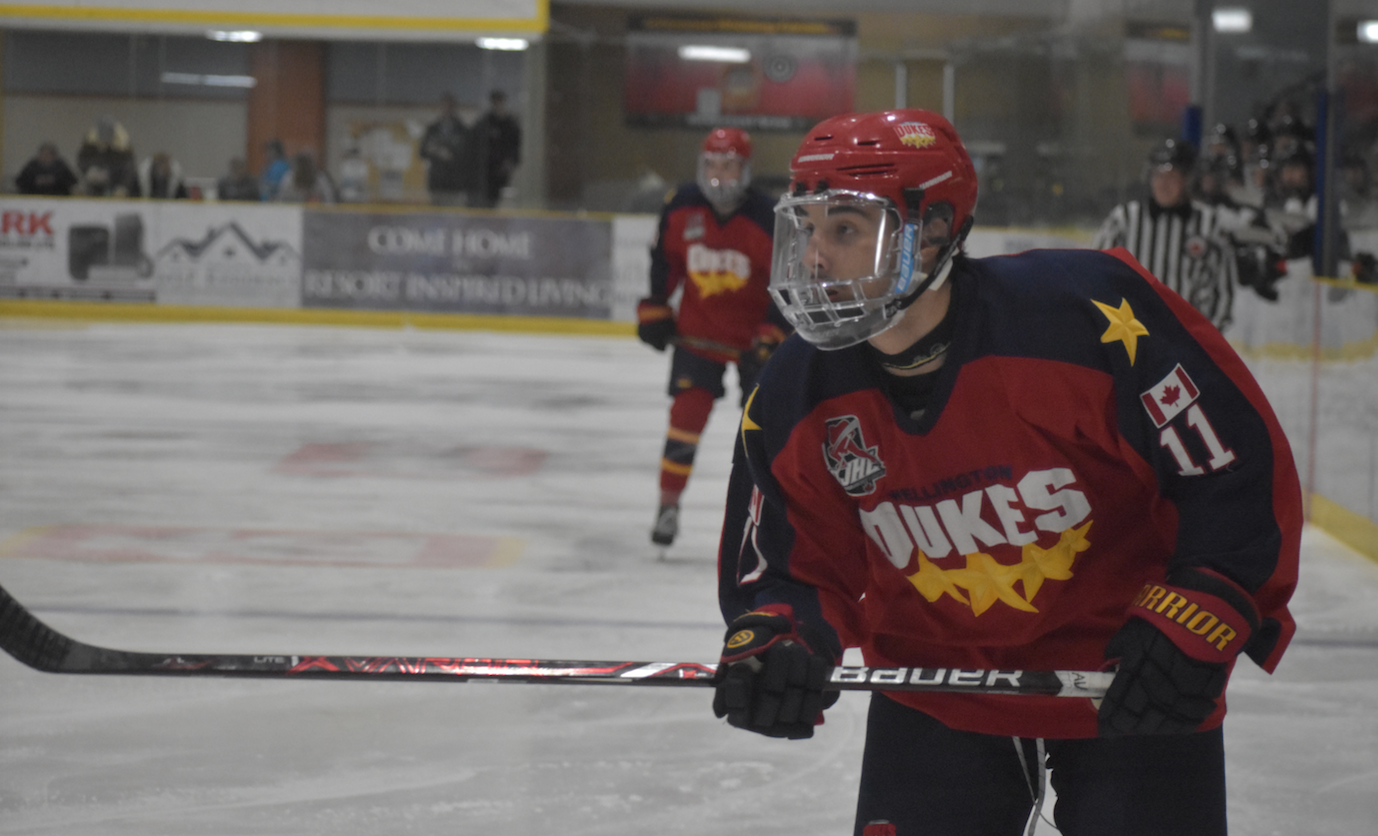 Mathieu Hebert’s power play goal late in the first period opened the scoring however the Dukes got that goal back in a hurry in the second as Evans would count at the 1:53 mark of the middle frame.

Wellington’s first lead of the contest came when Dylan Massie would convert at McDougall feed at 14:29.

Wellington would extend the lead at the start of the third period when Panetta banged home his 18th of the campaign.

Lindsay made it close again thanks to Dan Fagan’s goal at 3:32 but Wellington got some insurance off the stick of Vitucci at 18:15 to salt the game away for the Dukes.

The late-game tally from Vitucci was the Yardley, PA native’s 30th of the season and made the forward Welington’s top goal scorer.

Quinn Hanna’s 11th goal of the season into a vacated Muskie net sealed the scoring at 5-2 in favour of the hosts.

After Tuesday’s game in Whitby, Wellington hosts St. Mike’s on Friday night then heads to Oakville to play the West Division leading Blades on Saturday.