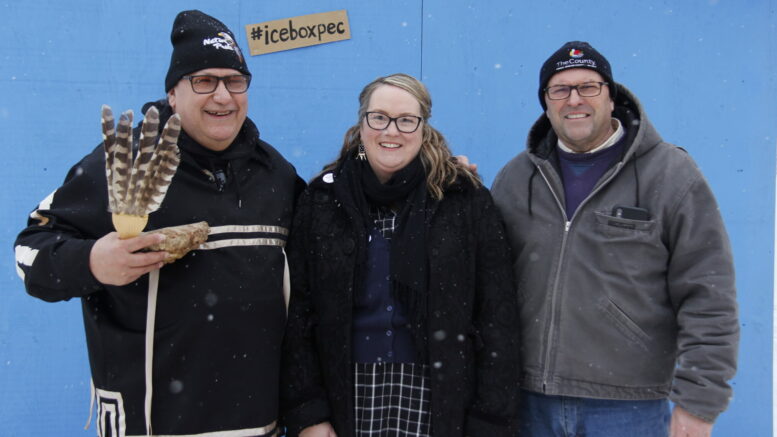 The second annual Ice Box- an outdoor art in the heart of winter event run by The Department of Illumination opened this weekend on the grounds of Macaulay Heritage park in Picton. Juno-Award winner Justin Rutledge finished his intimate concert at Macaulay church at Ice Box on Sunday with his iconic “don’t be so mean, jellybean” on the Six String Nation guitar, Voyageur. Rutledge kept throwing smiles and winks to his wife and 6 month old son who were in the crowd. (Desirée Decoste/Gazette Staff)

The free festival which opened this weekend and runs Feb. 8 and 9 is on the traditional lands of the Wendat, Anishinaabe  and Haudenosaunee people and the opening ceremony took place with elder David Jock Wenhniseriio and Mayor Steve Ferguson acknowledging that fact.

Elder Jock greeted the spirits with unconditional love and then spoke the ancient language of our ancestors while everyone listened in silence.

“The festival is happening on the traditional lands of the Wendat, Anishinaabe, and Haudenosaunee and I thank our elder David Jock Wenhniseriio, which means “he brings a nice day,” and he certainly did compared to last year where there was ice and wind pelting straight into our faces,” stated organizer Ryan Henderson representing the board of The Department of Illumination. “I’m honoured to have these two gentlemen leaders of our community here to welcome and bring this ceremony to the beginning.” Elder Jock opened the ceremony by purifying/cleansing everyones soul of negative thoughts which is called smudging, all the while at least five eagles sat in a tree in the distance.

The Mayor added how he can’t imagine Prince Edward County without art and how important it is within our community.

“I’ve spent all of my working life working in the arts community and I’m not an artist by any stretch of the imagination but it’s important in my life and the lives of people in the community I represent, which is absolutely significant. I’m not sure where inspiration comes from for those who make a living out of the arts or just do it for the sake of enjoyment but part of (Organizer Krista Dalby’s) art is moving and being part of events such as the Scarecrow Festival, Ice Box and the Firelight Lantern Festival. The Department of Illumination events and this one in particular involve all kinds of artistic endeavours, dance, theatre, visual arts as well as recognition of our indigenous groups and neighbours.”

As this being the second Ice Box, Dalby, Artistic Director for The Department of Illumination expressed how last year’s first annual event laid the ground work for the 2020 edition.

“It feels great to have our second Ice Box up and running,” expressed Krista Dalby, Artistic Director for the Department of Illumination. “Last year there was a lot of inventing things from scratch so getting to do it again. It’s nice the second time around, you don’t have to invent the wheel.”

With plenty more programming this year thanks in part to a number of grants The Department of Illumination received, the five colourful wooden huts had a cross-section of 2019 artists returning but with all different art installations.

Dalby touched on how it’s a challenge for the artists to learn how to work in such a different environment then they are typically used to.

The second day of Ice Box brought Juno Award winner Justin Rutledge for an intimate concert at Macaulay Church, maple taffy on snow, crackle and pop dance and many more activities/programs to be enjoyed by all including being able to get your picture taken with Canada’s most famous guitar, Voyageur. (left) Nella and (right) Marion Casson, the artits behind the stitch hut, created a 16-foot-long scrolling tapestry showing of their trip last fall across Canada as seen through the window of a train for Marion’s 80th birthday. (Desirée Decoste/Gazette Staff)

“I want to thank (Wenhniseriio) for sharing his words and some of his traditions with us this morning as he did last year and as he did in our inauguration back in 2018 on the stage of the Regent Theatre,” added Mayor Ferguson.

Ice Box continues this weekend and is a free event although donations are greatly accepted.

For more information and to see a schedule Participants in the Crackle and Pop dance moved and boogied to the music, all while getting themselves warmed up. (Desirée Decoste/Gazette Staff)