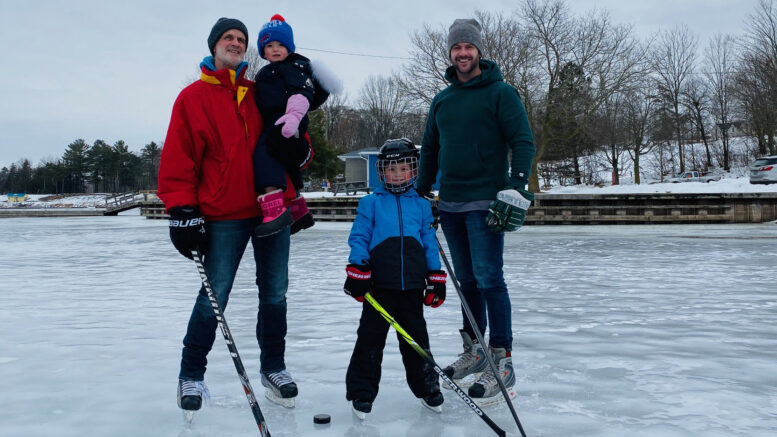 Three generations of Thompsons hit the Picton Harbour ice on Friday afternoon including (from left)m Blaine, Aviana, Cruz and CJ Thompson. A former Wellington Duke and NCAA champion, CJ Thompson hopes to revitalize the harbour and his Tip of the Bay property in the coming years. (Thompson Family Photo)

The story of CJ Thompson is much more than your typical ‘local boy does good’ tale.

That story was likely written a number of times in this paper during the Picton native’s athletic career that saw him represent our community by being a key member of the Wellington Dukes and their run to the 2003 Royal Bank Cup.

Earning an athletic scholarship through an admirable Jr. A hockey career, that story continued at Oswego, New York where Thompson was part of the Oswego State University Lakers and that NCAA University’s capturing of the 2007 Division III Frozen Four national championship.

Now, that ‘local boy’ and his family are trying to do further good for this community by developing the Picton Harbour into a attractive asset for Prince Edward County.

After graduating from OSU, Thompson spent eight years working in finance but had larger visions for his family and the town of Picton. Thompson wanted to commit himself to developing a business that revitalized the Picton Habour waterfront and he purchased the Tip of the Bay property in July 2019 through his holding company, Tenacity Capital.
As is common knowledge to most long time residents, the property was a former motel that has been modestly transformed into office and medical space, The building is the current home of the Prince Edward Family Health Team as well as the Innovation Centre, an incubator for a pre-revolutionary rural technology and skills concept.

But Thompson has a grander design for the languishing waterfront and how it will look in the future- a properly refined jewel that becomes an economic hub as well as a public access point that more accurately represents Prince Edward County and the direction the municipality is heading.

However, the future development of the Tip of the Bay property is part and parcel of Thompson developing a partnership with the County of Prince Edward that sees harbour front revitalization with a focus on municipally-owned marina boat launch property.
While it’s unknown what is contained in an expected municipal staff report regarding the future of the sliver of municipal property that hosts a gas pump, public washrooms and a launch/parking area at Thursday’s Committee of the whole meeting, the County does have some sense of direction as to where the future of Picton’s waterfront should be heading.

According to Section 22 of the County’s 2014 Strategic Plan,  supporting and attracting private sector marina investment in suitable locations across the County and encouraging the enhancement of public docking and launching and residential development where appropriate is beneficial to developing that vision.

In order to support this strategic plan, the municipality brought together a community stakeholder group responsible for further developing an overall vision for the County’s marinas.

As part of this group’s mandate, they have been charged with the creation of a Picton Harbour Development Plan.  In doing the research for the plan, it was identified the Picton Marina could provide the amenities that are both needed and desired by the marine community if operated by a private sector entity.

The calibre and class of craft that are coming and will be coming to such an attractive tourism destination hotspot necessitate a well-developed marina.

Essentially, Thompson is eager to work out an agreement to lease the land with periodic reviews as to the benefit of the continuation of such a pact so there’s a high degree of marina functionality as well as continues safe public access.
Thompson acknowledges the current financial state of the municipality represents a problem when it comes to increasing the services of the boat launch and enhancing the waterfront for public access.

“I believe the costs associated to maintaining the boat launch and waterfront should not come at the burden of the tax payer as the municipality must focus on core infrastructure / essential services,” Thompson told the Gazette.
The local entrepreneur is seeking the support of the municipality to form a partnership that would see Tenacity Capital manage the operations of the boat launch and for the holding company to fully finance the revitalization of the harbour by constructing a first-class waterfront & marina for the community at no cost to the County of Prince Edward
“Improving the marina and waterfront creates connectivity; connectivity to commerce with new jobs, connectivity to community through enhanced public access and a strong connection to the past,” Thompson added.

For Thompson, a recent spell of cold weather allowed him and his children Cruz and Aviana and his father Blaine to reconnect cherished childhood memories late last week with a skate on the harbour ice.
“In the chilly winter months, the harbour was the place that I could always count on for a game of pickup with my friends, it was a place of community,” Thompson said. “When I look out there today, I do not see that same sense of place. I want this property to be that place for our community once again.”