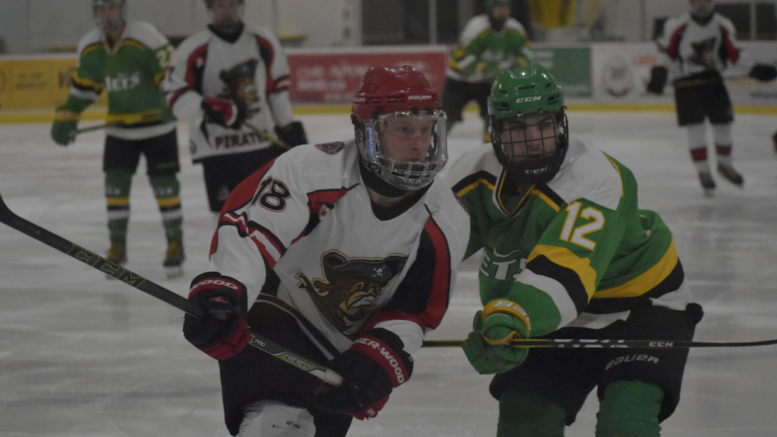 The Picton Pirates continue to roll towards the Provincial Junior Hockey League’s 2020 post season as one of the loop’s hottest teams.

The Pirates did what they do best on Thursday night, gutting out a critical, come-from-behind 3-2 overtime win over the Amherstview Jets.

On Sunday, Picton predictably walked all over the host Campbellford Rebels in a lopsided 11-1 affair  to further cement their second place standing in the PJHL’s Tod Division.

With the wins, the Pirates moved their record to 26-14-2 and 54 points which is four points clear of the third place Jets who still have one game in hand but are quickly running out of race track. Picton has now won seven straight and 18 of its last 20 games and the locals seem to have a certain way of coming up with a timely save or a big goal in the third period that helps a contest end in their favour.

Given their positions entering Thursday night’s game at Huff Estates Arena, a three point game was better for Picton than it was Amherstview, considering the Jets held a third period lead.

With referee Duane Parliament putting the whistle away and letting the teams decide the contest in a penalty-free affair, the veteran Jets tried to impose their will physically against the younger Pirates but the locals did not break under the pressure.

Down 2-1 midway through the third, Picton’s Dawson Linsday made an incredible individual play to split the Amherstview defence and slip a puck past Jets starter Brady Sarazin at 9:14 to tie the game.

Despite facing a desperate team looking to regain home ice advantage in the opening round of the playoffs and down a goal, the Pirates never wavered.

“The key to our success lately is that we keep pushing and we don’t give up,” Pirates head coach Tyler Green told the Gazette after the game.  “Even when we didn’t bury some chances in the first period, we stuck with it and found a way to win the game late.”

The clubs would play tied to the end of regulation.

In the extra session with the teams playing three skaters a side, it was the dynamic Khaden Henry gaining time and space to deliver the puck to Kurtis Wood who managed a shot to the Amherstview net.

Sarazin would make a short side stop but the puck would leak towards the goal line.

Seeing a loose puck behind the Amherstview netminder, Consecon native Nick Kirby-Palliser bolted to the goal and swept the puck into the Jets net at the 2:10 mark before a defender or Sarazin could extend the contest with a desperation move. “I was just driving hard to the net,” Kirby-Palliser said. “It’s a big adrenaline rush when you see a puck sitting there like that and you know you can win a game and get your team the point.”

“That’s a perfect play for him and he’s not shy with his smaller frame,” Green added.  “He plays the game hard and finds ways to make plays once he has the puck on his stick.”

Picton trailed twice in the contest.

Brayden Bertrand scored 2:05 into the game to give the Jets a 1-0 lead.

In the second, Picton responded as Will Harrison fed Griffen Conger at 5:22 to tie the contest up 1-1.

Amherst view’s Aidan Harris would count at the 13:21 mark of the second to put the Jets up a goal where they stayed until Lindsay’s heroics at 9:14 of the third.

Picton netminder Kyle Renaud drew the starting assignment for the locals and made 33 stops, many of the clutch variety when Picton was mired in their own end for lengths of time.

“Rennny was huge for us once again. In situations when the team in front of him isn’t sharp, he’s really good at calming things down and letting us find our legs,” Green said.

On Sunday, Picton was the proverbial buzz saw and the sad-sack Rebels served as the wood to be cut in an 11-1 thrashing.

Conger had a hat trick to pace the Pirates attack while Harrison had four assists.

Henry had a pair of goals to extend his Tod Division goal scoring lead to 36, a half dozen clear of second place Justyn Steven of Napanee.

With just two games left in the regular season and at 59 points, the Picton forward would be hard pressed to win the Tod Division scoring race currently led by Napanee’s Evan Foley who as 74, however it would be hard to imagine anyone else laying claim to the Rookie of the Year award other than the Belleville-born sniper.

Eric Tessier made 26 saves for Picton, picking up his 14th win of the year.

The Pirates finish off the home portion of their 2019-20 regular season on Thursday against Gananoque and then are in Port Hope on Saturday to play the Panthers.