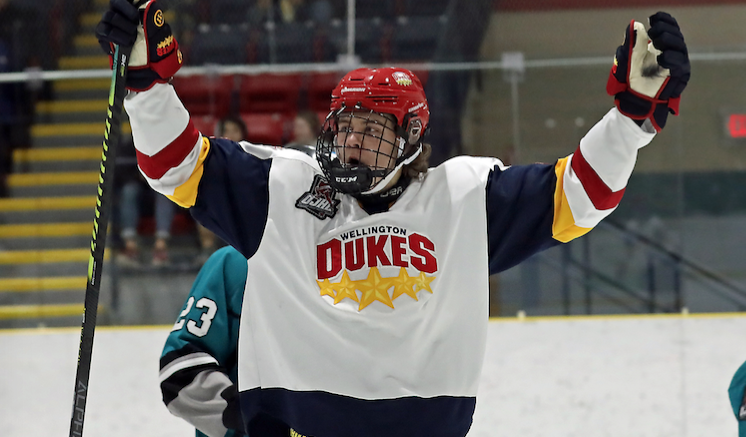 The Wellington Dukes soldiered on this weekend, much like their captain would’ve wanted them to.

On Friday, the Dukes were able to stave off the visiting St. Mike’s Buzzers 5-3 before going on the road to Oakville and beating the Blades in overtime 4-3 on Saturday night.

The crucial wins moved Wellington’s 2019-20 regular season mark to 38-9-2. With 78 points, the Dukes trail the East Division leading Trenton Golden Hawks by a point but have two games in hand on their Loyalist Parkway rival.

The locals played at home on Friday night and the contest marked the first game at Lehigh Arena since Ben Evans was quite likely lost for the season on a high speed and dangerous collision in the corner of the ice surface.

The club confirmed late last week Evans suffered two broken vertebrae in his neck as a result of Artem Guryev’s checking from behind penalty Sun. Feb 2. at Lehigh Arena.

Guryev, a defenceman on the Lindsay Muskies club, has not played since that contest and is expected to be out for a number of games when the Ontario Junior Hockey League announces a suspension.

Dukes head coach Derek Smith admitted it’s been an emotional time around the Wellington dressing room. Evans addressed the team at practice last Monday and his jersey has been hanging on the Wellington bench during games ever since as to inspire his teammates.

“He’s our leader and he’s our capitan,” Smith told the Gazette. “He’s been staying positive and the first thing we are worried about is seeing him back and being a healthy 20-year-old person. He’s still inspiring his teammates in a different way but hockey is completely secondary at this point.”

Evans is currently sporting a neck brace and will be seeking treatment at McMaster University near his hometown of Thorlold, ON. There’s no timeline on Evans recovery and the Dukes aren’t saying much about his status however this type of injury usually requires months-if-not-years to recover from. Wellington Dukes defenceman Quinn Hanna had a goal in the third period and another in overtime in a 4-3 win over the Blades in Oakville Saturday. (Ed McPherson/OJHL Images)

The forward who set up the 2018 Buckland Cup winning goal with a nifty pass to Frank Pucci from behind the Georgetown Raiders net off a play that will be etched in Dukes’ fans minds forever was certainly in the thoughts and prayers of the local fanbase on Friday as a number of get well soon cards were signed prior to puck drop.

Wellington got off to a hot start as James White would set up Justin Paul just 37 seconds into the game to give the hosts a 1-0 lead.

Former Duke Luca Marcellitti would have a hand in a St. Mike’s response as Brad Somers beat Wellington starter Matt Dunsmoor at the 14:05 mark.

In the second, the Dukes forged ahead to stay thanks to a nice finish by Frank Vitucci.

Dukes defenceman Brett Humberstone would spring Wellington’s leading goal scorer at 15:30. Vitucci, on a 2-on-1, would look pass and then rip a wrist shot over the shoulder of Buzzer netminder Sebastian LaBora to put the hosts up 2-1.

In the third, Evan Miller would set up Brodie McDougall at the Buzzer net at 7:12 to extend the lead to 3-1.

Just 46 seconds later, Jake Gagnon’s nifty pass found the stick of Vitucci to make it a three goal spread in favour of the hosts.

The Dukes would need that insurance as the Buzzers came back on Wellington, first with an Ayrton Martino breakaway goal at 9:03 and then an Evan Tanos power play marker with just under two minutes left.

After St. Mike’s beat the Dukes on a last second goal back in January, you could excuse the Dukes if they felt like they had seen this movie play out before but Wellington hung tough.

With LeBora removed for an extra attacker, Paul would spot Dylan Massie leaving the zone and the Point Claire, QC native pushed the puck into the empty St. Mike’s net with 65 seconds left on the clock to salt the game away for the hosts.

Smith said the contest was emotional as the Buzzers were looking to improve their place in the South Division.

“Every point is crucial and we were thinking back to the that game Jan. 10 against them,” Smith said. “I thought we had a good 60 minute effort.”

On Saturday, Wellington was in Oakville to battle the West Division leading Blades in a contest that pit the top two OJHL teams by way of winning percentage against one another.

In seasons and playoffs past, the Dukes have struggled with the Blades on their olympic-sized ice sheet and Saturday looked to be more of the same as Oakville skated to a 2-0 first period lead.

“It was a long day of travel after an emotional win the night before so I wasn’t surprised we didn’t start very well but once we had our feet underneath us, we had a good response,” Smith said.

White would convert a Cole McGuire feed at 6:22 to get the visitors on the board at 2-1.

In the final frame though, the Dukes would take control.

The hulking McDougall would bag his fourth goal in three games on the power play at 12:10 to make it 2-2 and Smith credited the Keswick, ON native with stepping up his overall game after the Evans injury.

“He’s got an increased role on this team and he’s playing a really heavy 200′ game right now,” the coach added.

Just over two minutes later, Wellington was pushed in front by defenceman Quinn Hanna who seems to get better and better as games grow in magnitude.

“He’s a guy who leads by example and logs a ton of minutes for us,” Smith said. “This is the time of year he steps up and brings his game to a new level and that’s exactly what he did on Saturday in a high stakes game.”

Vitucci would feed Hanna at 14:13 to give the Dukes their first lead of the contest.

Wellington would relinquish that lead towards the end of regulation as Alton McDermott would cash in on the power play with just under three minutes left.

A chippy affair and a scrum at the end of regulation led to Wellington starting overtime with a four-on-three man advantage.

Lightning would strike twice for Wellington as it was Vitucci once again teeing up Hanna for a game winning drive at the 1:16 mark.

Wellington hosts the Toronto Patriots in a rare mid-week contest that will be nationally broadcast on CHCH starting at 8 p.m.

The Dukes play a second straight home game on Friday against the division leading Toronto Jr. Canadiens and are in Cobourg on Family Day for a 7 p.m. start against the Cougars.