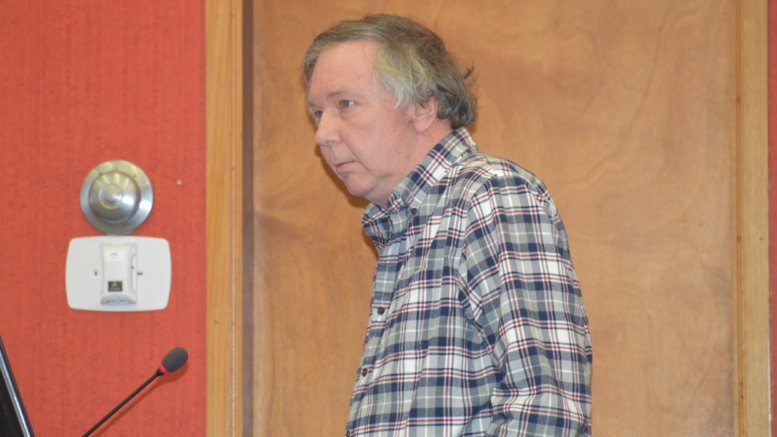 During council’s last Committee of the Whole Meeting, former Green Party candidate Danny Celovsky made a plea to local government to step-up their fight against climate change.

“We have a serious problem and it has to get fixed,” implored Celovsky.

Despite the seriousness of the problem, in Celovsky’s estimation, there is still time to reverse some of the effects of climate change. Instead he came to Shire Hall to discuss what he sees as a more immediate and grave issue-the lack of action on the part of municipal government to mitigate climate change and what he described as action being taken against action on climate change.

“I’m pleading for you to change your ways and lead us through this emergency that you declared last may. I am scared, not about the crisis because we recognized it and have the time to solve it…I am scared we do not have the courage in our leadership to act on it,” he stated.

“This is the war of our lives. We are fighting a tipping point that, if we lose, will result in nature taking total control over what happens next,” he said.

Celovsky recounted his time on the campaign trail, when he had the opportunity to listen to the thoughts and worries of constituents. Two things became painfully clear to him at this time: people are scared and they don’t feel they have a livable future in front of them. Further to this point, Celovsky cited a recent Abacus Data poll on climate change and noted that the majority of Canadians were found to not only recognize climate change as an issue, but want government to work to combat it as opposed to facilitating it.

Locally, Celovsky noted the dismantling of turbines to be an example of acting against climate change mitigation.

“If people recognize the problem and urgency and then call out their leaders, but those leaders fail to act, what will happen,” questioned Celovsky. “The stakes are high. It is life itself.”

The former federal candidate for the Bay of Quinte riding sees a future where civil unrest becomes a reality, once people are fed up with governmental inaction and time to curb emissions has run out. Operating on this assumption, Celovsky entreated council to act transparently. Specifically he asked them to film and make public any future meetings they should have.

Council already streams their scheduled meetings, but Celovsky wants them to provide even more transparency.

“This is simple to implement,” he stressed. “It does not require a vote of council. It is an individual choice.”

Though the municipality made a climate emergency declaration last May, Celovsky maintains not enough has been done to that end.

In her response, Councillor Janice Maynard argued that although the county has been “slow to the game” with regard to combating climate change, there has been some change made. She cited the newly formed Environmental Advisory Committee and the proposal to turn the county’s streetlights to LED.

“Little by little, we are trying. We hear you. If we can get some more trees in the ground, and make some small changes, then that will be a good start,” said Maynard.

Speaking in support of Celovsky’s deputation was Don Ross, a member of the County Sustainability Group. Ross urged council to take action, stating the time to act is upon us.

“We can’t take back the 50 years since the first Earth Day warned us about the harm we were doing to nature, or the 48 years since the Club of Rome warned us infinite growth on a finite planet wasn’t sustainable,” said Ross. “Those were all the best times to do the right thing, but the second best time is now.”

“We have councillors here walking the talk. They’re making personal commitments,” said Roberts. “There are ones who are leading a charge-even on the garbage bags. We’ve passed motions here expressing our strong support for restoring funding that was cut provincially regarding the 36 Conservation Authorities in Ontario.”

As well, Roberts stated he couldn’t recall any deputations made to senior levels of government wherein the issue of climate change was not approached.

“The issue is democratic leadership across the globe,” said Celovsky. “It has to start somewhere.”