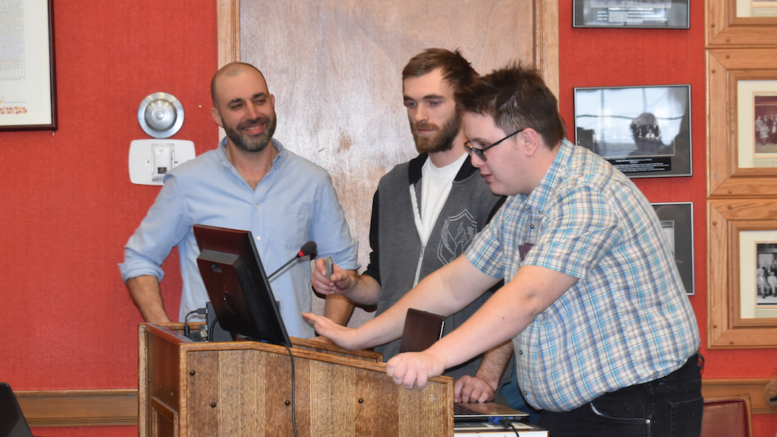 Prince Edward Learning Centre (PELC) brought an innovative food security strategy to Shire Hall during the recent Committee of the Whole Meeting. Taking to the podium were three students-Sam Dorey, Les Bystrzycki and Bradley O’Neil- along with program facilitator Jonah Schein. Their deputation resulted in a motion being passed by council requesting a report from staff concerning the proposed food security strategy.

The deputation was a result of PELC’s recent food education program. But more than that, their urging for a food security strategy is driven by the day-to-day struggle many county residents face as a result of food insecurity.

“Many students at PELC have low incomes. They struggle to pay for housing that is unaffordable and they experience food insecurity,” noted Schein.

Through their experiences with the food education program, many at PELC became aware of the food system that surrounds us, and the potential for improvements within that system.

“Transforming our food systems should matter to all of us. We live in an area of abundance of food and yet there is much food insecurity in our community,” stressed Bystrzycki.

In fact, according to the 2018 Vital Signs Report, approximately 2,000 Prince Edward County Residents are food insecure.

“We see many people struggling without the money they need to access healthy food, whether you’re working a low wage job or receiving an impossibly low income through the Ontario disability Support Program (ODSP), Ontario Works (OW) or CPP,” said Bystrzycki. “We know many people have to choose between paying for rent and paying for food.”

According to the public health unit, between 2008 and 2018, rental costs increased by 67.8 per cent and the cost of healthy eating increased by 43.8 per cent.

Bystrzycki described the deleterious health effects he suffered from decades of unhealthy eating. As he explained, he now has diabetes, high cholesterol, heart disease and breathing problems.Furthermore, Bystryzcki argued that our current food system is not geared toward residents of the county, widening the gap between the “have” and the “have not”.

“Our current food system is not working,” admonished Bystrzycki. “We see a food economy that serves tourists and drives up food costs for local residents.”

Dorey spoke to council from the perspective of someone who has worked in the hospitality industry. Though Dorey praised local restaurant owners, he noted that many restaurants are not financially accessible to the majority of people who live and work in the community.

“I’ve seen a table of customers pay as much in one meal as my fiancé and I do on one month of rent,” he added.

For Dorey etc., their ideas for the food system are not without action. They have already hosted a public health community food assessment, from which they gathered feedback from community members/partners, and have plans to open a non-profit food market to increase access to affordable fruits and vegetables.

Their vision for the county’s food system includes making nutritious food more accessible to everyone and building upon the rich local history of food production. The group believes that to achieve this, council and the community needs to have a larger discussion about the relationship between food insecurity and other pressing issues in the area, such as the housing crisis.

“If we take action to address the affordable housing crisis, if we build a food economy that really serves our community, if we capitalize on the abundance of good, local food, we can make sure everyone has access to nutritious food,” he stated.

With this in mind, the students from PELC asked council to strike a working group with municipal staff, councillors and community partners to work towards a food vision and strategy for Prince Edward County. They also outlined a number of possible ways in which council could help revamp the current food system.

Among their suggestions were a levy on tourists to generate revenue in support of local food programs, reducing single use plastics and implementing food procurement policies.

Councillor Kate MacNaughton described the presentation as shaking her out of the status quo bias and enabling her to think about a more local, cyclical economy.

“This got me started thinking about what we could be doing, whether it’s year round food production with sustainable greenhouses or finding a way to find investors and bring back canneries so that we’ve got ways to process the food we’re producing, like we once did,” she said.

Councillor Bill Roberts inquired as to the difference between what the PELC group was proposing and the current food collective initiative already in place.

Schein was quick to respond that their hope is for council to create new policies, not just initiatives.

Councillor Jamie Forrester put forth the motion for a staff report regarding the proposed food security strategy which would also address the need for a working group, citing the need for more in-depth focus on the subject.

“A lot of times, we’re putting resources all over the place trying to help just enough, but maybe not enough to really fix the problem,” said Forrester.

Mayor Steve Ferguson also spoke in support of the report.

“Speaking to the motion and the report coming back from staff, I would ask staff to be particularly thoughtful about new and innovative approaches we can take to tackle the issues we’ve spoken about today so they remain front and centre of council consideration and deliberation,” he said. “We need to cast a lens on this to come up with some innovative approaches and to think about this outside the box.”

Several members of the public spoke in support of the PELC deputation. Among those was Donna Lowes, a Registered Dietician with the Prince Edward Family Health Team (PEFHT).

“We often think about McDonald’s versus apples in a simplistic approach to food insecurity, but it comes down to kids trying to manage ADHD through dietary changes, people trying to count their insulin, or older adults trying to stay healthy,” she stated.

Lowes iterated it is hard to address the range of effects nutrition has on a person’s wellbeing and that there needs to be more done to help those who are food insecure and to educate people about food.

Rachel Wong, a Registered Dietician with Hastings and Prince Edward Public Health (HPEPH) also spoke in support of the deputation, citing the need for a cohesive food strategy to guide municipal decision-making on how the County and community can address the issue of food insecurity.

“We support this from a health perspective, because a healthy, sustainable and accessible food system is an important resource to ensure community health,” she said.

Wong cited a 2017 population health assessment that found 40 per cent of Hastings Prince Edward residents did not meet the 2007 Canada food guide recommendations for vegetables and fruit.

She also cited a 2013 situational assessment conducted by the Hastings and Prince Edward Counties Healthy Communities Partnership, which aimed to assess community support for new municipal policy related to healthy eating. According to Wong, of the 97 residents of the county who were surveyed, 75 per cent agreed the municipality should limit the amount of unhealthy foods available at municipal buildings and increase the amount of healthy food at these places.

“Municipalities can help improve the nutritional health of their communities by helping to make the healthy choice the easy choice through policies, initiatives and community design,” added Wong.