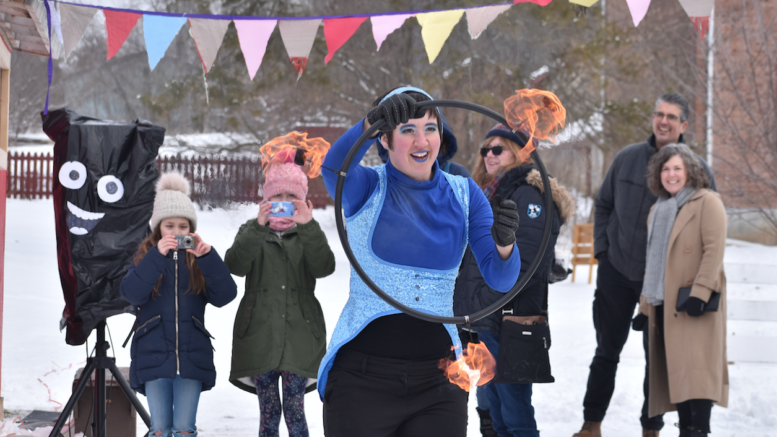 Setting like the winter sun, ablaze in all its glory, the second annual ICE BOX Festival concluded this weekend with an impressive display of fire spinning, dance and community spirit. The event, which ran for two weekends, concluded on Sunday.

While attendees revelled in the last of Picton’s mid-winter festival, Trellis Arts & Entertainment provided death-defying entertainment by way of a fire-spinning, fire-eating, fire-throwing marvel. The final weekend of ICE BOX boasted a range of events, from a spinners and weavers presentation to an ancient Indigenous tools presentation and demo.

The event is the brain child of non-profit organization, the Department of Illumination. This same non-profit also hosts the beloved Firelight Lantern Festival and the Scarecrow Festival.

Before the finale got underway, Artistic Director Krista Dalby took a few moments to speak with the Gazette about her take on the evolution of the event and its success. Comprised of workshops, demonstrations, and experiential art installations, ICE BOX may seem quaint, but drew an estimated 3,000 attendees.

“It’s been really great. We’ve had a really good turnout and I’m very pleased with the artists’ work,” enthused Dalby.

The artists, including fibre artists, print makers and more, worked in five ice huts to transform each into whimsical worlds of art.

“Many of the artists have returned from last year, so they were able to build on their experience of filling a space with art and having thousands interact with it,” said Dalby.

The second ICE BOX featured all new art installations and a host of new learning curves, as artists grappled with how to create works in sub-zero temperatures. With lows of almost -20 this past Saturday, Dalby noticed a dip in attendance, but as with any winter festival, those who attended brought enjoy layers and laughter to keep warm.

“Numbers were down (Saturday) because of the cold, but everyone had such a good time. The sun was shining, there was tons of fresh snow and everybody that was here came prepared and bundled up,” said Dalby. “It was a joyful experience.”

The artists involved were, as Dalby states, mostly artists she has collaborated with in the past and has chosen for the variety of mediums they work with. For example, Chrissy Poitras and Jenna Kusch, who created an ice hut together, are print makers, whereas Nella Casson works in textile.

“Having different ideas and approaches is really great,” stated Dalby.

ICE BOX is gaining momentum, after what Dalby describes as a “very challenging” first year due to finances.

“The first year was very challenging. It (ICE BOX) did not exist yet,” explained Dalby, adding that many investors had to act on faith.

“We were definitely underfunded last year, however, we got amazing documentation, both video and photographs, and we got the numbers,” she added.

Since their inaugural year, ICE BOX has received letters of support from the community, making the grant process easier. This year, the Department of Illumination received a patchwork of funding from federal grants, a provincial grant and some municipal assistance, as well as some community sponsorship and donations.

“This funding is really important,” Dalby emphasized. “Artists deserve to be paid adequately for their work. That’s something that I fight really hard for.”

With this year’s festivities having folded, Dalby is already looking ahead to next year, when she plans to “go bigger and better”.

As well, Dalby insists there will be a call for submissions, with the hopes that at least some of the same artists will return to participate.