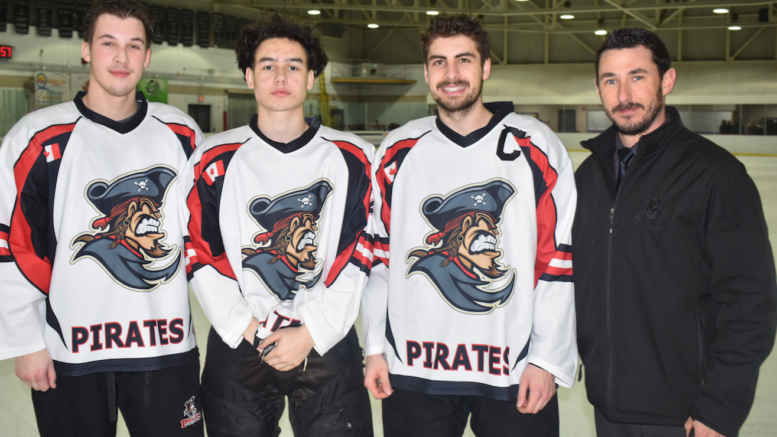 In a year where they were one of the hottest teams in the second half of the 2019-20 Provincial Junior Hockey League regular season, it shouldn’t come as a surprise a number of Picton Pirates warranted consideration for the year-end Tod division trophies.

What is surprising is that the voters on the panel to select the top performers got it right and managed to put their mark next to four deserving members of the local PJHL squad.

Not to rehash old gripes or anything but sometimes those year-end accolades have had a tough time finding their way to trophy case in the lobby of Huff Estates Arena.

Four members of the Pirates- Nick Kyte, Will Harrison, Khaden Henry and coach Tyler Green- were honoured prior to puck drop on Thursday night as the Pirates entertained the Gananoque Islanders in their final home game of the season.

The locals put a bow on the regular season campaign this weekend, firmly clinching second seed in the Tod Division thanks to winning Thursday’s game 3-1. 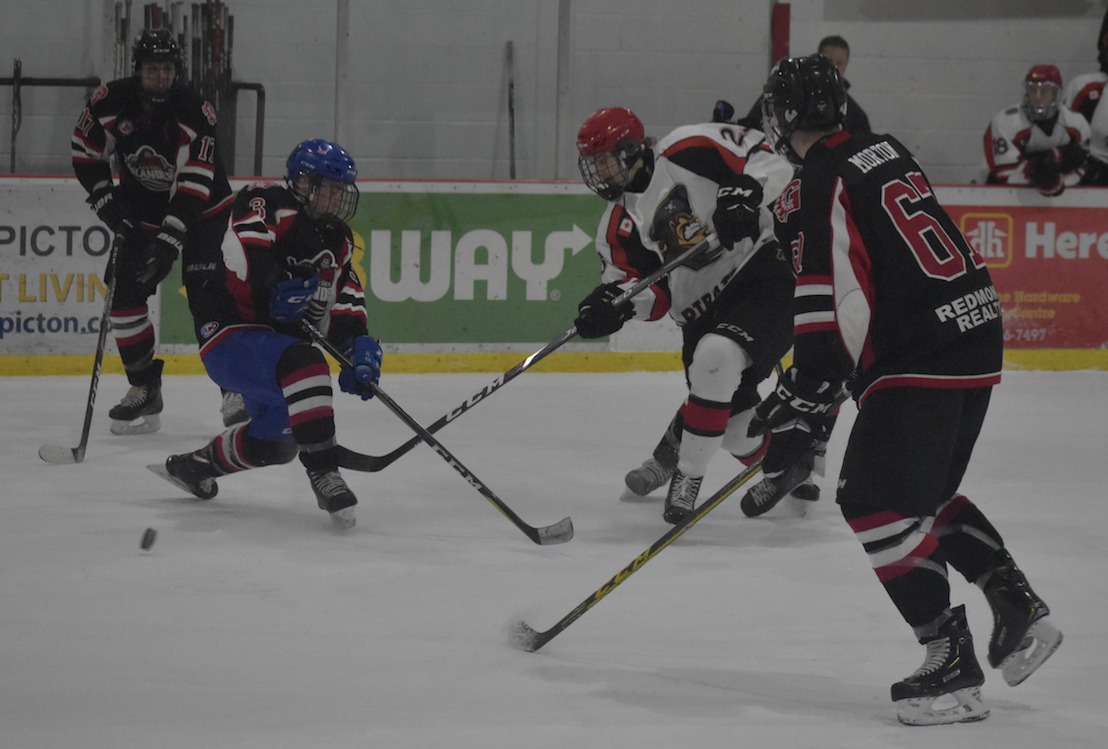 With their spot sewn up, the Pirates might have put preservation ahead of performance on Saturday night as they dropped the season finale in Port Hope 3-2 to finish the season 27-15-2, good for 56 points.

For a team that was eight points out of a playoff spot at the end of November,  20 wins in 23 game stretch has certainly made watchers of the this level of junior hockey sit up and take notice.

The Belleville, ON native led the division with 37 goals in 43 games this season and also led the Pirates in scoring with 60 points.

Coming up one point shy in the Picton Pirates point parade was Harrison who took home the Tod’s Most Sportsmanlike Player of the Year. Notching 20 goals and adding 39 helpers for 59 points, the club’s captain often needed directions to the sin bin as he only picked up four minor penalties this season.

On the back end, Nick Kyte was one of the best producing blue liners in the loop and his reliable body of work made things easier for Picton netminders.

Potting nine goals and adding 21 assists, the Belleville, ON native could be counted on to move a puck, make a big hit and jump into the rush for Green’s club and picked up the Defenceman of the Year award, making it the second straight season a Pirate has won the honour.

Derek Vos, who started the season splitting time with the Pirates and Wellington Dukes before moving up to Jr. A hockey for good in November, was the 2018-19 winner.

Finally,  Green was deemed as the league’s best bench boss in 2019-20, managing a young squad that took some time to mature and gel and then coax that group with a few key additions into a club that’s full of confidence heading into the PJHL’s second season.

That confidence was on display Thursday night as Picton handled a desperate Gananoque club that was in the process of watching their grip on the fourth and final playoff position in the Tod get usurped by Port Hope.

Ultimately, after Picton lost on Saturday and Port Hope moved ahead of the Islanders, Gananoque came back and defeated Amherstview Sunday 4-1 to create a tie for the final playoff position and the right to face division winning Napanee in the first round.

That play-in game will likely go Wednesday at a neutral site however the details are still to be worked out.

Picton forced Gananoque to qualify for some semblance of  a post season in a nicely managed 3-1 win Thursday.

Picton opened the scoring in the second as a quick up from starter Kyle Renaud to Cooper Rogers allowed the Picton defenceman to find a streaking Henry who beat Tod Division Goalie and Most Valuable Player of the Year Jeremy Piazzi at 5:30.

The Pirates doubled their just 30 seconds later when Nate Boomhower spotted Landon McLellan going to the Isle’s net at the 6:00 minute mark.

Former Pirate Matt Poole would get a goal back at 8:06 from a tough angle but Picton had a dagger off the stick of Brian Bygrave with 24 seconds left to head to the second intermission up 3-1.

Renaud made 15 of his 39 stops in the third as Gananoque pressed to get back in the game but Picton withstood the charge to lock up second seed and home ice advantage for at least the first round.

On Saturday and with host Port Hope playing for their playoff lives, the Pirates did manage to take a 2-1 lead to the dressing room after 20 minutes. 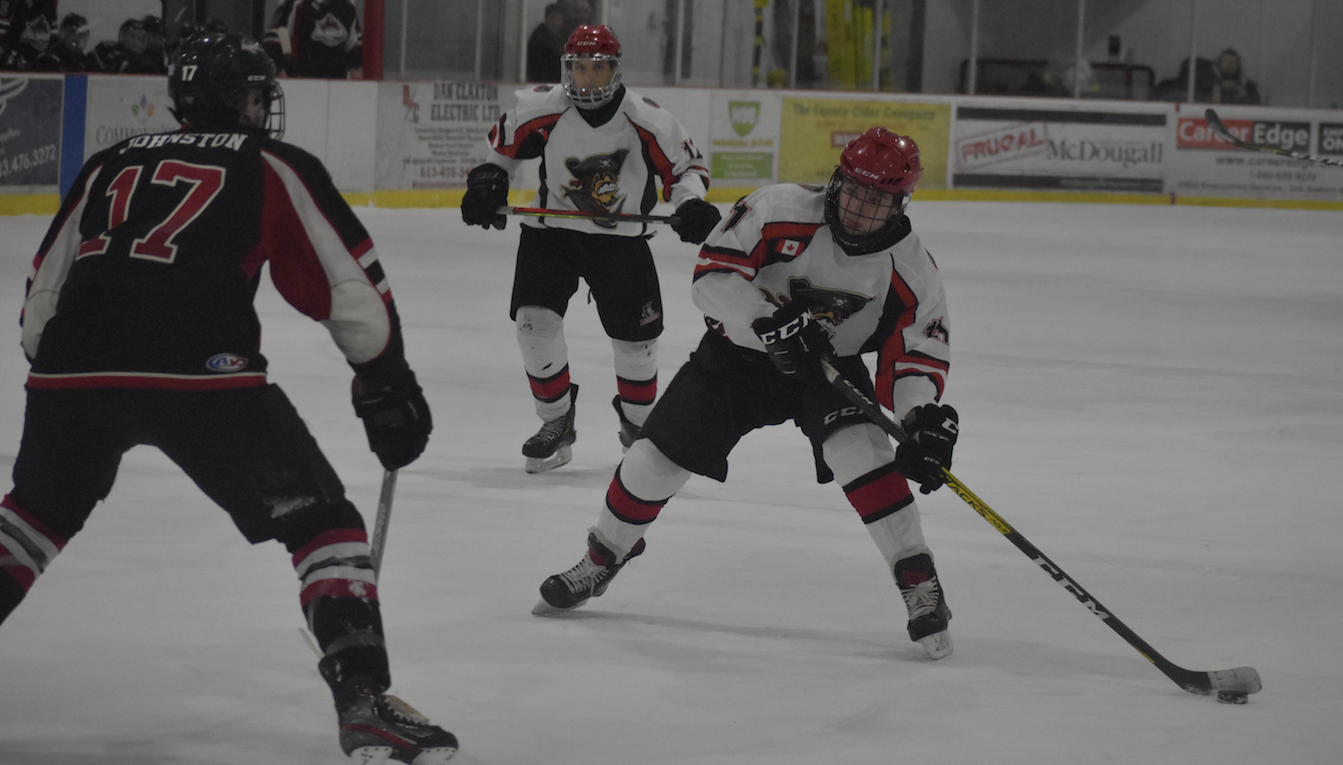 Picton’s Dawson Lindsay gets a shot away during his team’s 3-1 win. (Jason Parks/Gazette Staff)

After Nolan Stevenson scored a shorthanded goal at the 9:06 mark, Picton’s checking line got the locals back to even as Nolan Dawson fed Garrison Moore just 50 seconds later to make it 1-1.

The Pirates would get the power play sorted out later in the frame as Kurtis Wood set up Nate Boomhower at 14:44 to make it a 2-1 margin for the visitors.

A Bryson Kelloway power play goal late in the second would square the affair at 2-2 and Tavish Davidson’s shot at 2:49 of the third would give the Cats their first lead since midway through the first frame.

Picton would hunt for an equalizer but none would come and a eight game winning streak was snapped in the final contest of the regular season.

After Thursday’s game, the award winners spoke with the Gazette about their accolades.

Henry, who initially signed in Gananoque and was part of a deal that sent long time Pirates forward Devin Morrison to the Gateway to the Thousand Islands in September, said he was thrilled with the way his season transpired.

“I came in with confidence but I didn’t have the best season last season (with Quinte AAA). I knew that if I had the right coach and the right team, I could have some success,” Henry told the Gazette. “I’ve really been able to connect with the players here and playing for the Pirates has been very beneficial for my career. I’m very happy I got traded here.”

Kyte  returned to Picton partway through last season and looked at it as a responsibility to help foster and mentor the youngest team in the Tod while they developed and learned the ways of PJHL hockey in the fall.

“We have a lot of young guys on the team so we had to take those players under our wing a little bit and we’ve been able to find success, Kyte said, adding this has been season has been his best in four campaigns representing the Bucs and much of that comes from the closeness of the club. “This has been the best year i’ve had in hockey and it’s a really strong and tight knit dressing room,” the defenceman said.

In Harrison, Picton has a player that leads by example. The least penalized team in the loop is led by its most sportsmanlike and likely most dedicated hockey player.

The long time Pirate who moved into first overall in regular season games played for the organization last month admitted Thursday’s game was bittersweet in that it marked the end of his regular season career but Picton was able to secure second place.

“It really feels like yesterday that I was suiting up and playing AP games for the Pirates,” Harrison said, admitting it was somewhat ironic to think back to his early days and then look down the bench and a see a young player on his line like Henry who is just starting his junior career.

“Time sure does fly.”

All three players were extremely complimentary to Green who was at a loss for words on Thursday night.

“It was a pretty crazy roller coaster ride at the beginning of the year but the character in that room grew and grew and we were able to put that on the ice,” Green said. “This award is a proud moment for my career but it’s always been about showing up every time and help prepare these guys to do battle.”

As for playoffs, Green said the team has had to have a playoff mentality for the second half of the season and doesn’t think the mind set will change.

“We’ve been tested all season and we’ve had to become mentally strong and prepared to battle in order to accomplish what we have,” Green added. “We just need to stay focussed and draw from our character.”

Picton opens the post season at home Thursday at 7:30 and then travelts to Amherstview on Sunday for a 7:25 p.m. puck drop.

Game three is back in Picton Thursday, Feb 27th.