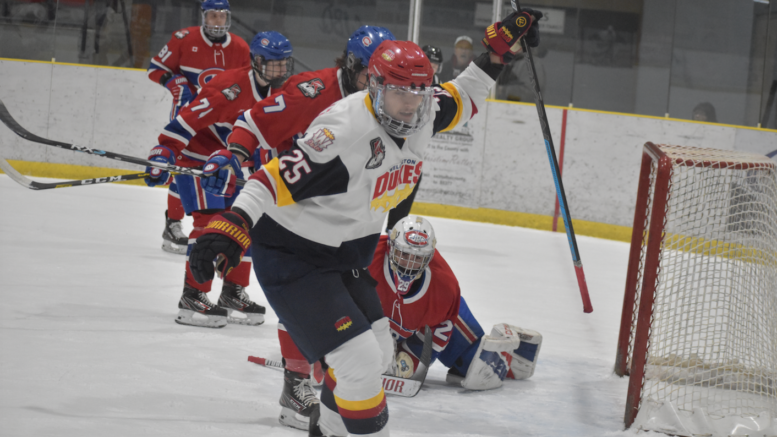 A bid to be the top team in the 2019-20 Ontario Junior Hockey League regular season is firmly within the grasp of the Wellington Dukes.

The locals made it 11 wins in a row this weekend, taking care of the top two teams in the South Division in Wellington Wednesday and Friday then dumping the host Cobourg Cougars on Monday.

The three wins leaves Wellington firmly in the driver’s seat heading into the final weekend of the regular season in terms of  Southeast Conference and the OJHL.

The Dukes (41-9-2) lead the East Division with 84 points, one point clear of the Trenton Golden Hawks.

Wellington and Trenton meet on Friday in a showdown that would’ve decided top seed in the circuit save for the fact the local squad has a game in hand on their arch-rival.

Even a Wellington loss on Friday in Trenton would be mitigated should the Dukes win in Markham on Saturday and two points at any point this weekend would secure top seed in the division and Conference.

In terms of top overall seed in the OJHL, the Dukes lead the Oakville Blades by two points and both teams have two games remaining.

But regardless of how this weekend plays out, the Dukes appear to peaking at just the right time. 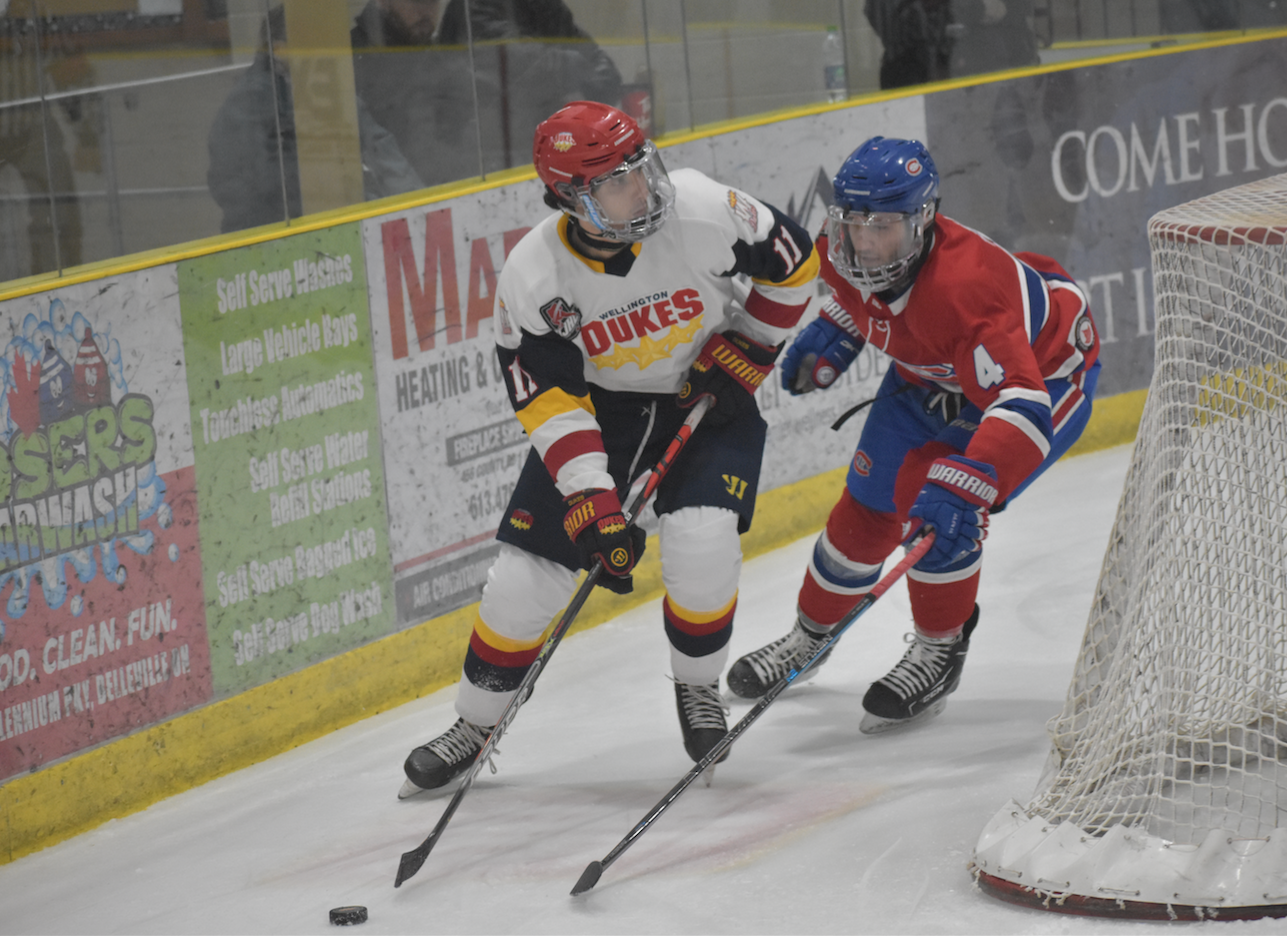 Wellington’s Frank Vitucci has 36 goals and is one off the OJHL lead heading into the final weekend of the regular season. (Jason Parks/Gazette Staff)

On Monday, the Cougars were no match for the Dukes as Wellington built a 3-0 lead through 39 minutes of play and then exploded for four third period goals.

Evan Miller set up both Jacob Vreugdenhil and Brodie McDougall in the opening frame to put Wellington up 2-0.

Despite dominating the Cougars and outshooting them 10-4 in the second, the teams tied the frame.

Dylan Massie added his 16th of the season with just under two minutes to go to make it 3-0 Wellington but Cobourg veteran Mac Lowry responded with just 16 seconds left to give the Cougars some life late.

But the Dukes figured out Dershahn Stewart in the third as defenceman  Brett Humberstone blasted home a pair, Vreugdenhil tallied his second of the contest and Dawson Ellis notched his 14th of the season to go up 7-1.

The Cougars would once again tally very late to slightly damper Wellington’s productive period to make it a 7-2 final.

Friday’s 4-0 win over the visiting and South division leading Toronto Jr. Canadiens should come with a qualifier in that it’s not every game the Dukes will be granted a five minute power play to work with in the first minute of a hockey game.

A major penalty for kneeing to veteran forward Matt O’Brien at the 59 second mark of the first led to Ben Woodhouse and Dawson Ellis scoring goals at the end of the five minute man advantage.

Dylan Massie would sweep home a goal from the slot with 46 seconds left in the stanza to put the Dukes up 3-0.

Jumping out to a lead, Wellington did an admirable job defending and limited the Jr. Habs to just 20 shots on the Dukes net.

In the third, Frank Vitucci would pot his 36th of the season to make it a 4-0 final in favour of the hosts.

Dunsmoor picked up his second shut out of the season.

Just two nights prior, viewers from coast-to-coast witnessed the Dukes quell the visiting Toronto Patriots 7-3 in a game where Wellington was out shot by the visitors but made the most of their opportunities, scoring on 30 per cent of their 21 volleys.

Wellington led 3-0 after one thanks to goals by Dylan Massie, Noah Massie and Vituccui.

Early in the second, rugged blue liner Jacob Breckles celebrated his recent NCAA commitment to Adrian College with a goal.

The Pats Peter Flemming’s first of two would get Toronto on the board but goals by Frank Vitucci and Evan Miller before the end of the stanza made it 6-1 in favour of Wellington.

Another Flemming goal and a power play marker off the stick of Paul Spadafora at 11:32 got the Pats to within three but a Quinn Hanna blast at 12:56 made it a 7-3 final.

Hanna’s goal was his 15th of the season and the rangy defenceman is on quite a tear offensively. In the last eight games, Hanna has 13 points and is tied with Trenton’s  Sam Duchesne as top offensive defencemen with 55 points a piece.