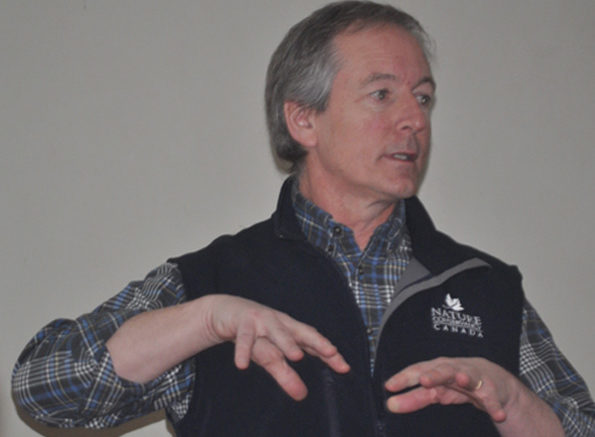 For residents of Prince Edward County, the singular beauty of the south shore is no secret, and neither is the rate of change currently transforming the municipality. Against this backdrop, Mark Stabb of the Nature Conservancy of Canada (NCC) presented to County council Tuesday during the Regular Council Meeting at Shire Hall with regards to the conservation progress and plans of the NCC.

The NCC has been operating as a non-profit, non-governmental land trust since 1962. They work across the country, acquiring land through donation and purchases in order to protect habitats.

“We do our work where biodiversity is highest and development threats are also highest,” explained Stabb, who then showed council a map illustrating areas targeted for conservation across the country.

Locally, the NCC have partnered with the Hastings Prince Edward Land Trust, but have partners as far away as the arctic.

In Ontario alone, the NCC has helped conserve 84,000 hectares of natural habitat.

Together, the NCC-HPELT coalition teamed up for the creation of the Hudgin Rose Conservation Property, an area located near the ecologically sensitive Ostrander Point.

“The county has many spectacular and many subtle features. You’re probably aware of the features to the north-the ice scrapes left behind 11,000 years ago when Lake Iroquois was once over Lake Ontario,” he stated.

Stabb asserted he was eager to work with the community and other land trusts to help protect some of the beautiful landscapes here in Prince Edward County.

NCC also helped to create the Miller Family Nature Reserve also located near Ostrander Point. As well, the NCC have designs on a new project near Soup Harbour.

The work of NCC, as Stabb explained, is through purchases and donations. Once particular areas have been targeted, the NCC tries to have a big impact by “bulking up properties bit by bit”.

“When we target an area to work in, we try to work closely with local partners and with the community,” said Stabb. “We identify rare species and habitats of interest, especially the most intact and larger plots of habitat that could be protected in some way. Prince Edward County’s south shore along Lake Ontario has many examples of that, for example the Blandings Turtle. They’re more rare, globally, than Giant Pandas.”

More recently, a land owner near Petticoat Lane on the south shore approached the NCC. This particular land owner originally had plans to put his property on the open market, but decided instead to sell it to the conservation group.

Stabb maintains there are plenty of examples of private land becoming public land.

“These two blocks of land are now bracketing Ostrander Point, a crown land block, and there’s discussion about what the future is for that particular piece of land. Now that we’re neighbours, we can work directly with the province to come up with partnership opportunities and shared efforts to monitor, maintain and deal with species,” he asserted.

Apart from monitoring and studying plants and animals, the NCC works to develop stewardship plans. Their properties are all open for the public, with the exception of areas belonging to rare, sensitive or threatened species.

The NCC is also committed to working with the Prince Edward County Field Naturalists to develop a land owner project with the aim of developing climate resiliency.

“We are in this for the long term,” Stabb explained.

In fact, the NCC has been working in the county since the 1970s, when they purchased Main Duck Island for conservation efforts.

Councillor Stewart Bailey inquired as to the purpose of discussions regarding crown lands.

“NCC is not involved with lobbying the government to move ahead with conservation agendas. But, as neighbours, we want to work with them,” Stabb responded. “I know there are other discussions about the future of those lands that this might get embroiled with, but no matter what happens there, we’ll be neighbours to help ensure a greener future while recognizing the current uses of the property.”

Stabb iterated the NCC would be happy to speak with willing land owners who have an interest in having their properties conserved.

“We, as well as the Hastings and Prince Edward Land Trust, can do things in a whole variety of ways,” he said, explaining the the benefit of having a local land trust partner and willing community members.