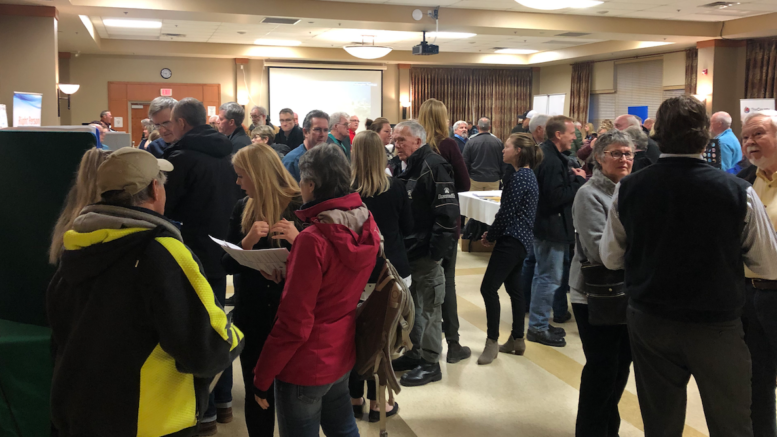 READY FOR THE WORST - Members of the public, along with local dignitaries and organizations attended the recent Flood Preparation Open House with a talk given by Sarah Delicate of United Shoreline Ontario (Courtesy of the County of Prince Edward).

On a night when many would likely rather have been at home, close to 500 filled the Wellington and District Community Centre to attend the Flood Preparation Open House hosted by the Municipality. The event fell on the heels of Mayor Steve Ferguson’s discussions with Deputy Prime Minister Chrystia Freeland, which took place earlier that same day.

Apart from members of the public, all members of Prince Edward County Council along with CAO Marcia Wallace and several representatives from neighbouring municipalities were in attendance. Local organizations that could help with flood preparedness and mitigation also attended.

In his introductory speech, Mayor Ferguson explained that he, along with Mayor Harrison, Deputy Mayor Jim Alyea and representatives from Belleville had been waiting for their meeting with Freeland “for quite some time”. The meeting was arranged by Bay of Quinte MP Neil Ellis. 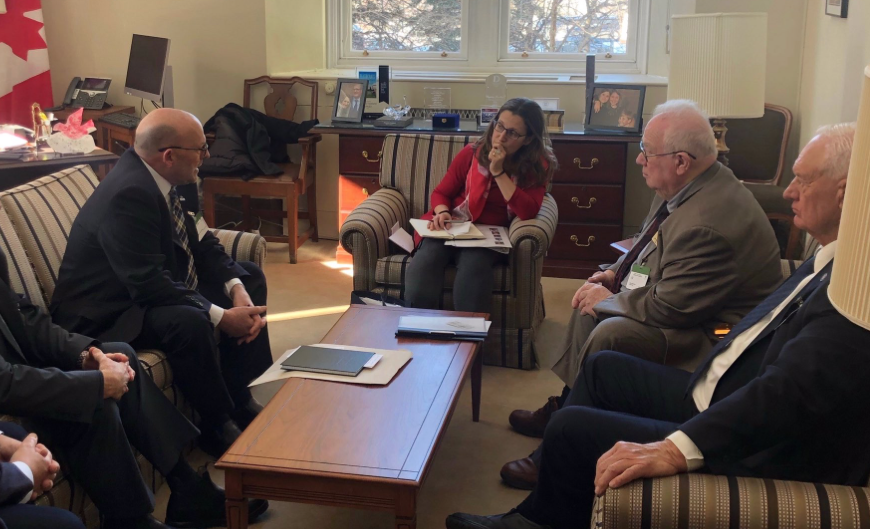 “We brought to her our concerns about the water levels and any remediation that might be available to property owners who have been affected by water levels in 2017 and 2019,” said Ferguson. “We found her to be attentive, engaged and extremely interested in the information we were providing.”

Reportedly, Freeland also had with her a member of Global Affairs Canada who works with the International Joint Commission (IJC) and was given “directives”. As well, Freeland is looking into funding for those affected by the recent floods.

Ferguson began with urging the audience not to wait until flooding to prepare for that eventuality. He also made clear the focus of the evening would be on how best to prepare for high water levels, rather than focusing on the perceived misdeeds of government or failings of Plan 2014 and the IJC.

“We are not here to debate Plan 2014 or the role of the IJC, or if the federal or provincial governments are doing enough. I want to keep the focus on preparation. You cannot and should not wait a few months to see just how high the water gets,” he stressed.

Mayor Ferguson implored the audience to prepare for the “worst case scenario”. He cited a 13cm rise in lake levels this past January, despite record outflow levels. Ferguson also recalled an ominous warning from the National Lake Ontario and St. Lawrence River Board warning communities that the risk of high water levels this spring remains elevated.

As of January 29th, Lake Ontario water levels were 55 centimetres above average and only four centimetres below the record high for this time of year, which was set in 1952, noted Ferguson.

“There’s nothing any level of government can do fast enough to make a significant impact for spring 2020,” stated Ferguson.

Ferguson implored members of the public to volunteer their efforts to should another flood occur.

“I am extremely proud to live in a community-and be your mayor-where we help each other. This, I daresay, is unique in Ontario. If you want to get involved, and I sincerely appreciate it if you could, please visit the volunteer booth,” he urged.

Speaking as a representative of United Shoreline Ontario, a grassroots, community based organization that gives residents and communities of the North Shore of Lake Ontario a voice, was Sarah Delicate. This initiative also engages government and private land owners, businesses, emergency responders, municipalities and more from flooding.

Delicate began by describing her own horrific experience with the 2017 flooding. Hailing from Bowmanville, she described a community in shock from flooding where none had previously occurred.

“We’ve never flooded. There is no history of it in our community. As with many communities, when 2017 hit, no one was ready,” said Delicate.

She stressed that there are many different repercussions from flooding. It may affect people differently-from home owners to business owners. However, one commonality that Delicate emphasized was that regardless of the outcome, flooding can be a life-changing event.

For the town of Bowmanville, flooding resulted in contaminated drinking water and damage to trees caused by sand bags that were rotting and also contained salt. They were never meant to be used in a flood situation, commented Delicate, and nobody in the community was prepared for the necessary emergency response.

“When your house catches on fire and burns to the ground, it’s done. This flooding has extended for weeks and months on end. People have to set their alarms to go off every two hours through the night to make sure their sump pumps don’t stop working-for week’s on end.” she said. “When this happens, residents become physically exhausted, mentally exhausted, financially strapped, emotionally raw and they don’t have a home to go to.”

As Delicate poignantly stated, life doesn’t stop because high waters have hit. The vagaries of human existence still exist for those in times of flood-whether it be death, divorce or anything in between.

Armed with an arsenal of statistics and facts about how the lake is managed, Delicate painted a picture of an issue that goes beyond high water levels to an issue of policy. Furthermore, she outlined the reasons why flooding has been occurring and what could be done to stop it.

“We are now 4.8 inches higher than last year. We are 20.16 inches above the long term average. We get a lot of information about how the lake is managed. It’s important to understand all of it,” said Delicate. 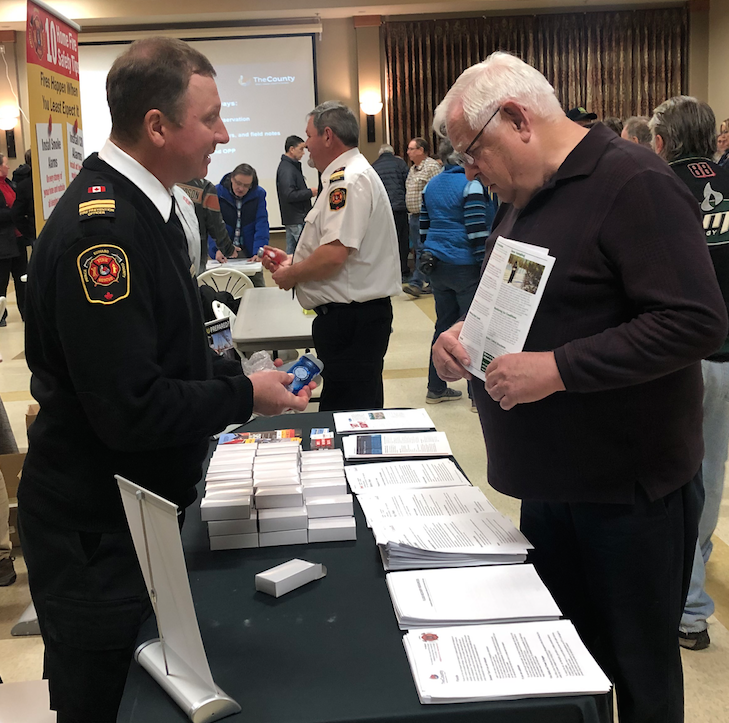 INFORMATION IS AN ALLY – Fire Prevention Officer Greg Gorsline offers information to an attendee of the recent Flood Preparation Open House (Courtesy of the County of Prince Edward).

Though she stressed Plan 2014 does not cause the flooding, it does make the water higher and the flooding longer.

“85 per cent of inflow into Lake Ontario comes from Lake Erie and it is at record highs,” said Delicate. “There’s a lot of water, all the way up the chain. The outflow is controlled by the Moses Saunders Dam in Cornwall. The Ottawa River joins the St. Lawrence just below the dam.”

Delicate explained that any changes to a regulatory plan such as Plan 2014 would require unanimous agreement on the part of six IJC commissioners. Unfortunately for those on the shores of Lake Ontario, there is no up stream representation at this level.

Although she does not believe we should reinstate the previous IJC regulatory plan, Plan 1958 DD, Delicate does believe it did a good job of managing lake levels.

Conversely, Plan 2014 is designed for higher highs and lower lows.

“(Plan organizers) wanted more range in the wetlands, for the health of the wet lands,” said Delicate. “What you see is 400 per cent more highs by design. This is still water, so add .5 ft., 2ft, 3ft, whatever surge you have.What is says in the plan is based on historical supplies, but we haven’t gotten that. We’ve had record supplies, wherein the projected maximum would be 2.4 inches higher than levels from 1958DD-about as high as a tennis ball.”

Delicate noted the issue was compounded by various components of the plan, such as: trigger levels, the F-Limit and the L-Limit.

“By the time you reach a trigger level, there’s no time to avert disaster,” she said.

In her presentation, Delicate pointed to a quote from the U.S. Department of Transportation. They noted that since the IJC’s December 2016 announcement of the plan (Plan 2014), environmental groups and shipping representatives expressed support, with the only group opposed being home owners, “whose homes would likely be flooded as a result of the plan”.

The F-Limit was designed to provide up and down stream, as well as to protect Montreal.

“Whatever the dam can handle is how high Lake Ontario can go under this plan…If we consider all the water given to us in 2019, all the in flow, and we just play it out without an F-Limit, levels downstream would have gone above flood line, but we would not have crossed the flood line,” she said.

Instead of this, Delicate, as part of United Shoreline Ontario, is advocating for a “shared pain” approach, instead of the current plan wherein Lake Ontario is disproportionately damaged.

The L-Limit was put in place to maintain a safe velocity for ships in the St. Lawrence River.

That is why, she asserts, the flooding issues experienced by Lake Ontario shoreline residents is a policy related issue, not just a climate change issue.

“It was known in advance Plan 2014 was going to cause damage. It acknowledges an increase in flooding, erosion and other damages. Even though that was known, municipalities weren’t warned. They weren’t given proper funds to prepare to mitigate or prepare to respond,” decried Delicate.

Armed with an arsenal of knowledge, Delicate urged the audience to write to different levels of government to express their concern about this issue. She also urged them to complete a social vulnerability survey available through the United Shoreline Ontario website.

“We were encouraged that so many people took advantage of this opportunity. We received a lot of positive feedback. People walked away from the open house with a lot of information about the resources that could help them start preparing for spring flooding. We recognize there is a lot more work for everyone, including the municipality, but this was an important first step to be prepared,” Ferguson stated.

He also expressed the continued need for community to band together during times of flooding.

“I hope I got the message across that neighbours should help their neighbours prepare for flooding if they are able to do so,” said Ferguson. “I want to thank the many organizations and agencies in attendance, as well as the municipal staff from Operations, Finance, IT/GIS, Fire and Rescue, and Customer Service who were there to speak with residents and answer their questions.”