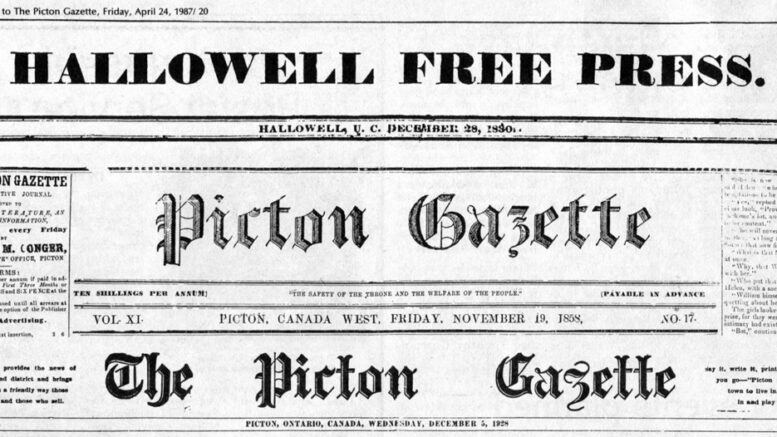 AN ENDURING STANDARD  A selection of mastheads that have adorned the Picton Gazette dating back to its formation as the Hallowell Free Press in 1830. (Picton Gazette Photo)

One might only imagine the thrill and excitement that late December day nearly two centuries ago when Hallowell Free Press editor Joseph Wilson held the very first edition of a newspaper due to hit the streets of the neighbouring villages of Picton and Hallowell Bridge.

On December 28, 1830 the first issue of the Hallowell Free Press was printed. It was the first newspaper printed between Kingston and Toronto, the seventh in what is now modern Ontario and the fifteenth in Upper Canada.

It was four sheets of very fine and thin paper that would feel like tissue when compared to todays newsprint. Each sheet six columns wide. The subscription price was 15 shillings per annum, 18 shillings by mail. Very little local news was actually printed in the early issues of the paper. In those days there was no daily newspaper, no telegraph, telephone or railway in Prince Edward County. The local paper was the only medium for supplying political and world news. Therefore the pages were filled with full reports of the debates in the sessions of Parliament of Upper Canada as well as poems and excerpts of novels.

In 1836, the Hallowell Free Press changed its name to the Prince Edward Gazette and, in 1848, the name of the newspaper of record for this community settled on the moniker the Picton Gazette. There were several owners and editors involved for short periods of time, but three families stand out as having devoted many years in the development of the newspaper.

In 1856, Stephen Conger became the owner and shortly after was joined by his brother J.W. Conger and together they published the Gazette for over 50 years.

On January 1, 1913, A.E. Calnan became editor and manager and his son L.B. Calnan joined the company in 1920. During the Calnan years many improvements were made in the newspaper, equipment and commercial printing. MEET THE PRESS A picture of the Picton Gazette press room at the offices at 2 Ross. St prior to relocation to 74 King St. (Gazette Photo)

The end of an era came in 1972 when L.B. Calnan sold the Gazette to Joe Cembal and, in 1977 J. Earl Morrison, publisher of the weekly Napanee Beaver purchased the newspaper. After his sudden death in 1978 his widow Jean Morrison carried on as publisher- a role she admirably filled until her passing in the fall of 2019.

For the first 70 years of its history, the Gazette was published weekly. In 1900 it was issued twice weekly on Tuesday and Friday as a four page newspaper. This was continued only for a short time until weekly publication was resumed. But again in May 1928 the business had grown to such proportions that twice-a-week, Wednesday and Saturday editions were published. In 1987 the Gazette was still publishing twice a week, but the second edition was no longer printed on Saturday. Because of the cutback of the service of Canada Post, the paper was then mailed on Thursday so readers may have the paper before the weekend.

This practice of twice-weekly printings continued until the early 2000’s when the course of news delivery changed to a broadsheet news product on Wednesday and a regional feature-laden tabloid edition was delivered to County homes on Fridays until 2009. At that point, the Gazette transitioned to an all-in-one tabloid edition that’s now delivered each Thursday.

Many changes have taken place in equipment over the years. When the Hallowell Free Press began publication printing was a slow process. It was all hand work. The type was inked by hand, the sheet of paper laid on the type and the wooden press was operated by hand as a rate of not over a hundred an hour.

In 1912 the Gazette announced it was moving to the rear half of the Oddfellow’s Block, and installing the most modern newspaper equipment and printing entirely by electric power. Again in 1928 another milestone  is marked in Gazette history.

A new high speed press was installed and it was reported, “No one can question the faith of The Picton Gazette. It shows by its investment of capital, labor and intelligent work that it believes in the future of Picton and Prince Edward County and is always on the alert to aid in the progress of the merchants and the betterment of community life.”

In 1963 the Picton Gazette moved its printing plant and equipment to its offices from 2 Ross Street to 74 King Street which is now home to Community Care for Seniors. This was a major operation requiring a great deal of planning and the production of the Gazette newspaper and commercial printing was maintained throughout the moving period.

It was during this time span that the Gazette featured two of its most prominent writers. Phil Dodds’ visage graces the front page of this special 190th celebration supplement. He is the young man standing at left in the back row of the 1930 Picton Gazette staff picture and was one of the people entrusted with crafting the centennial edition of the Picton Gazette. The work of Phil Dodds and his legacy as Prince Edward County’s preeminent  scrivener is remembered by many long time readers of this publication. Dodds was a firm believer in the majesty of this bucolic ‘burgh and celebrated everything Prince Edward County. Dodds could eloquently describe anything from a well-timed summer rain storm to the wonderful splendour of the annual township fairs and the only trait that matched his writing acumen was his tireless dedication to the County, its people and the issues of the day.

Juxtaposing to Dodd’s elegant prose would have been the scratchings of East Lake farmer and native Brit Harry Evans. The ‘Harry Sez’ column appeared in the Gazette from the late 1950s until the 1980’s and was hilarious or notorious, depending on your view point.

When it came to keen County observation with equal parts wit and disdain for the establishment, Harry Evans had his niche here in the pages of the Picton Gazette and the cheshire colloquial scrawl where he described something “ ‘appening over ‘ome” was written in such a way that one local educator wrote an impassioned plea to the Gazette to put a halt to Harry Evans’ weekly assault on the written english language. Such was Evans’ popularity, Toronto radio station CFRB would read his columns over the air and the Gazette office was inundated with requests from all over North America for mailed copies of the newspaper his scrawling would appear.

It was near the end of Evans’ run that the latest technology was installed when the Morrisons took over the newspaper. Video display terminals were installed and classified ads as well as editorial copy were transmitted by means of modern over telephone lines directly to a high speed Linotron typesetter in Napanee where all production was done. Eventually, the business was moved to a modern office at 267 Main Street in 1984 and has remained a fixture in the ever-changing landscape of Picton’s downtown core ever since.

At the current office, technology has drastically altered the method of news gathering, reporting and publishing over the past decade and Canada’s Oldest Community Newspaper has kept up with the changing face of journalism through the latest publishing software, digital cameras and social media processes.

The Gazette mourned the aforementioned passing of our great, long time publisher and inspiration Jean Morrison but in her stead, the printing presses role on under the guidance of the Morrison family.

“I know I speak for the entire staff when I say we are proud of the heritage and history of Canada’s oldest community newspaper and the responsibility of carrying on this legacy does not rest lightly on our shoulders,” Gazette Managing Editor Jason Parks said.

News is gathered and reported by keen writers, display advertisements and classifieds ads are developed and built by highly dedicated staff and the readers of the day in this community are informed, entertained and advised just as they were on that red-letter day in late 1830 when an inspired young man named Joseph Wilson held the very first Prince Edward County newspaper in his hands and set forth a legacy to be remembered, admired and revered.