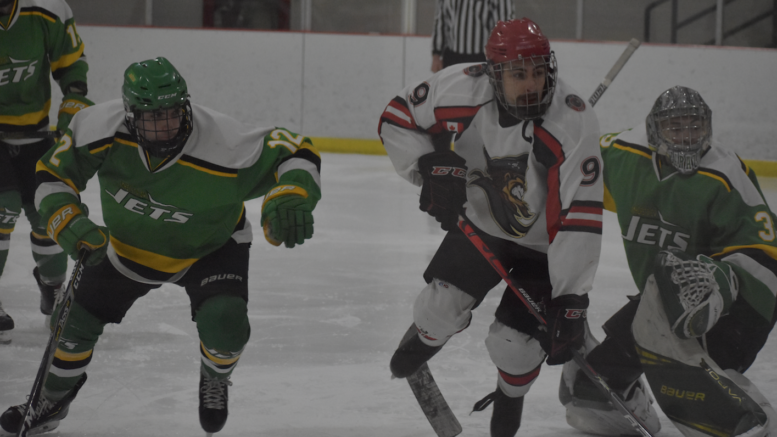 JUMPING FOR JOY- Amherstview Jet Nick Vecchiarelli tries to stop Picton Pirates centre Will Harrison as goaltender Brady Sarazin keeps an eye on the play during Game One. The Pirates managed to shoot down the Jets 6-3 Thursday and take a 2-0 lead into Game 3. (Jason Parks/Gazette Staff)

It appears to be a case of ‘Second verse, same as the first’ for the Picton Pirates.

After an incredible run on the back nine of the 2019-20 Provincial Junior Hockey League regular season where they took an astounding 40 of a possible 46 points, it was reasonable to wonder how Picton -fighting for the playoff lives for so long and starting well back of the pack at the end of November- would respond to playoff hockey.

Well, if the early returns are any indication, the Pirates weren’t completely satisfied with just racing up the Tod Division standings and picking up a hard-earned second seed.

The locals have taken the first two games of their best-of-seven opening series against the Amherstview Jets. 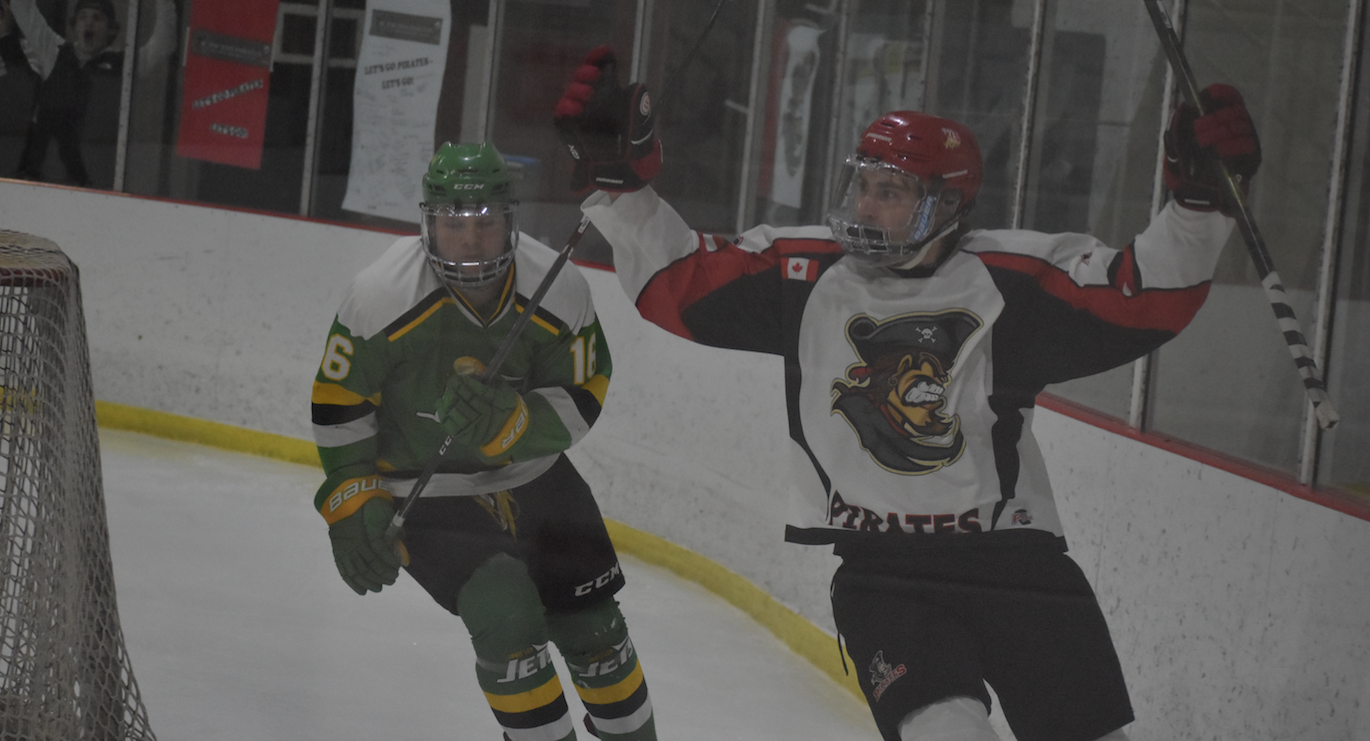 Through the first two periods of Game 1, there was little to chose from either team although the Jets had a lead in middle stanza.

After Pirates defenceman Cooper Rogers and Jets forward Blake Hogle traded goals in the final five minutes of the first, Amherstview would get its first lead of the series when Brayden Bertrand came up as the benefactor of a give away in the Picton end at 4:31 of the second, slapping a puck past Picton starter Kyle Renaud.

Despite the early goal against,  the Pirates were a determined bunch in the frame and bombed the Jets net liberally in the middle stanza with 18 volleys sent Amherstview starter Brady Sarazin’s way.

Picton would tie the game up on a strange play that resulted in a Brian Bygrave top shelf effort.

With a Picton dump in taking a detour off a Jet defender, a loose puck bounced off the end boards to Sarazin’s right. With a pace that negated the Amherstview goalie’s ability to play it, the puck sat just above the goal line as Bygrave raced towards the net.

Bygravers top shelf slap shot effort rang the back bar at 6:17 of the second making the game a 2-2 draw.

In the third, Amherstview would outshoot Picton 14-11 but the Pirates were both lucky and good to take Game 1 going away.

At the 3:01, Khaden Henry set up Landon McLellan who went top corner to beat Sarazin and push Picton ahead 3-2.

The Jets responded exactly five minutes later as Cody Smith barged his way to the Pirates net and tucked a goal past Renaud to tie it back up at 3-3.

Picton were on their heels momentarily after the Smith tally and Pirates coach Tyler Green told the Gazette the club had to reach to regain its composure and return to form.

“We’ve talked all season about the character that’s in this room and these guys never feel like they are out of a game,” Green said. “We know it’s going to be a grind for 60 minutes and that’s how we approach it. In Game 1 I thought we were a little anxious through the first two periods but then we got our legs moving.”

Tied at 3-3, Picton ratcheted up its play over the last five minutes of the game.

With team captain Will Harrison felled in the slot area, Jacob Dietz’s shot from the half boards might have been screened part way and Sarazin didn’t pick up the puck until it was behind him and in the Amherstview net with 4:31 left to go.

Just over two minutes later, Picton had a dagger as Henry deked a defender and sent Harrison in alone for a nifty backhand effort with 2:25 left.

Picton would send one into the yawning Jets hanger with 84 seconds left on the clock as Nick Kyte’s nifty airborne clear found a streaking Dawson Lindsay who made the final 6-3.

The Pirates wouldn’t need six goals on Sunday and in fact only needed one as Renaud made 43 stops in a 3-0 shutout effort.

While he still has a way to go before he can be added to the list of Pirates money goaltenders of the past like Alex Barankovskiy, Matt Kaludis, Andrew Pearson and Adam Wood, Renaud has been a dynamite addition to the Picton organization and has continued his playoff success from the 2019 post season that saw the locals fall short in the Tod finals against the eventual Schmalz Cup champion Napanee Raiders.

“He really bailed us out when we made mistakes in front of us and that’s usually what a playoff series comes down to,” Green said.

After a scoreless first, the game looked destined to go to the second intermission deadlocked at 0-0 until the final minute when Bygrave found Nate Boomhower with just 35 seconds left in the middle stanza to break the ice and give the visitors a 1-0 lead heading into the break.

In the third, Picton would add to its lead early thanks to a Harrison power play goal set up by Kyte and Dietz at the 2:14 mark to make it 2-0 Picton.

Amherstview would get three straight power plays in the middle part of the frame and fire 25 pucks on Renaud but the Woodlawn, ON native simply said “No” and denied the hosts time and again.

With time winding down and Sarazin on the bench for an extra attacker, Boomhower sent McLellan in alone for an empty net goal with just 58 seconds left to take the air out of the WJ Henderson Arena and bring the series back to Picton with the locals up a pair.

“We know it’s good to be up in a series and we’ve worked hard to get here but the job’s only half over. It’s a 60 minute battle every time in the playoff and we have to be ready to make the sacrifices and do all the little things that have kept us being successful,” Green added.

Game 3 is Thursday night with Game 4 going in Amherstview on Saturday.

Game 5 if necessary would be Sunday night in Picton at 7:30 p.m.