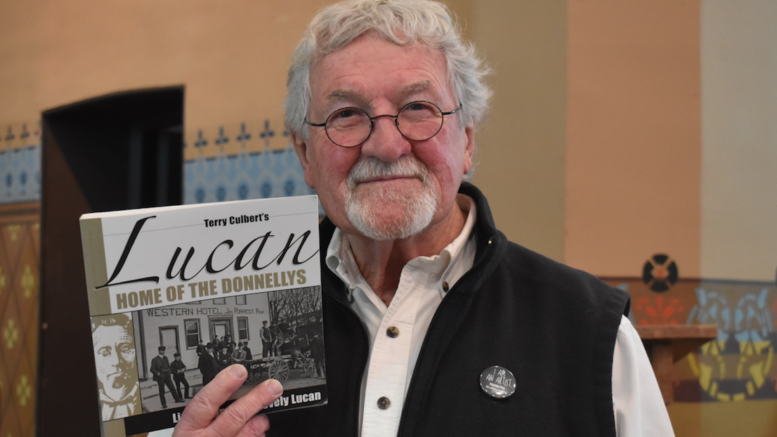 NOW AND THEN: Local author Terry Culbert poses with his book Lucan: Home of the Donnellys, before a talk given as part of Flashback February. (Sarah Williams/Gazette Staff)

On Tuesday afternoon, from the heart of the MacAulay Church, local author, artist and radio broadcaster Terry Culbert gave a captivating talk about the Black Donnellys.

Culbert has written and researched extensively about this family, and presented some of the findings from his book Lucan: Home of the Donnellys.

The talk was part of the County Museum’s Flashback February Series and upwards of 50 people showed up to hear Culbert retell tales of the ill-fated family and growing up just a few kilomtetres from where family members were assassinated at their home farm on the Roman Line.

The Black Donnellys were one of several Irish-Canadian family who immigrated to Southwestern Ontario in the mid-to-late 1800’s from Tipperary, Ireland, but are best known for the brutality of their demise. On the night of February 4th, 1880, a group of vigilantes murdered five members of the Donnelly family.

Despite several members of the vigilante group being tried, none were convicted.

Culbert grew up in Lucan surrounded by the infamous tale of tragedy that has captivated generations in all its varied permutations. Since 1880, the public appetite for more information about the Donnelly’s unsavoury demise has not waned. The story of the murdered family has appeared in books, tv shows and movies.

Lucan, like many areas of Biddulph Township, was settled by Irish, many of whom were from Tipperary.

“Growing up in the 40s and 50s in Lucan, I clearly remember it being strictly taboo to mention the Donnelly name,” said Culbert. “We were told relatives of the vigilantes involved in the massacre were still residing in the area.”

Culbert’s re-telling of the Donnelly murders casts an eye beyond pioneer life in Canada to the 1750s in Ireland, when a secret society called The White Boys was created by poor Catholics in order to get revenge on protestant land lords.

The White Boys got their name from the white garments they would wear during their nightly raids. As Culbert stated, this group swore an oath not to have any contact or business with protestants, let alone speak with them.

The White Boys terrorized protestants, killing their livestock, burning their homes, and even resorting to murder, stated Culbert. If any Catholics were seen fraternizing with protestants, they were terrorized too.

Conversely, those who either fraternized with protestants or were protestant themselves were deemed “black”, hence the reference to the Donnelly family.

“There is some speculation that the Irish Settlers brought their feuding ways with them, with Tipperary having a reputation for being the most violent county in Ireland, with a murder rate three times the national average in the 18th century,” noted Culbert.

Tensions would escalate in the Lucan community starting in the late 1850’s but would not reach its tipping point until members of Donnelly family were executed on that fateful February night 140 years ago.

As Culbert explained, the Donnelly’s were the victim of a long-held grudge within the community. He suggested this could have begun when the much-maligned family made a fateful decision to squat on their property instead of buying it.

The grudge against the Donnellys further intensified when James Donnelly Sr. murdered Patrick Farrell over a land-dispute.

The story of the Black Donnellys is one with more questions than answers, with many answers having befallen the same fate as the Donnellys themselves.

Nontheless, Culbert’s talk filled-in some of the blanks of this macabre chapter in Canadian history, helping to bridge the gap between the present and the past. For more information about the Flashback February Series, please visit: https://www.visitpec.ca/flashback-february/