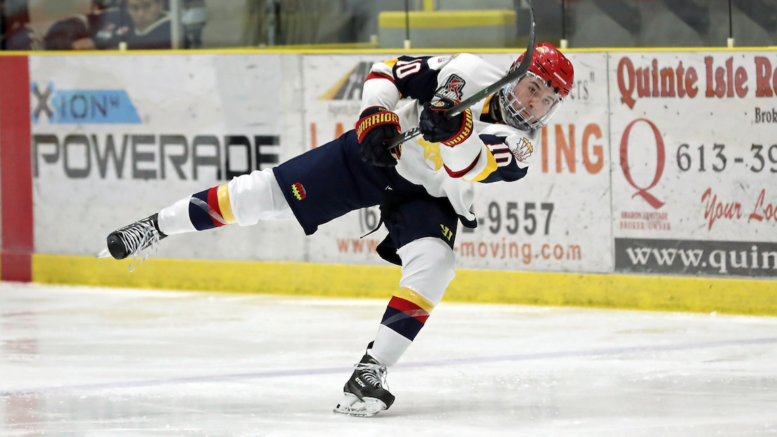 There was no better team in the Ontario Junior Hockey League this season than the one residing at Lehigh Arena.

To the delight of their fans, the Wellington Dukes capped off the final weekend of 2019-20 OJHL campaign with what was a frequent occurrence this season.

With the East Division, the South East Conference and the OJHL regular season title firmly within their sights on Friday, the visiting Wellington Dukes broke the hearts of their arch-rivals in Trenton, coming back and downing the host Golden Hawks 3-2 in overtime to cement all those aforementioned laurels.

Then, with not much to play for other than keeping their total losses to a single digit and extending their winning streak to 15 games, the Dukes, on back-to-back nights, overcame a 2-0 deficit in the second period to dump the visiting Markham Royals 5-2 to finish their season a gaudy 43-9-2.

That record and the 88 points secured from it bested the Oakville Blades by four for the overall top spot in the OJHL and is Wellington’s best regular season mark since the starry 2002-03 season when the Dukes only lost once in the regular season.

The nine regulation losses are also Wellington’s best mark in that category since 2011 when Wellington post just seven setbacks and beat Oakville in the Buckland Cup finals en route to a Dudley Hewitt Cup in Huntsville and an appearance at the RBC Championships in Canmore, AB.

With their first place finish, the club is setting its sights on the Coburg Cougars who will face Wellington in the opening round of the East Division semi-finals but Head Coach Derek Smith did offer his thoughts on his club’s final weekend of the regular season as well as the 54 game body of work in  the Dukes’ rear view mirror.

“This weekend was a testament to how hard these guys have worked all season long and be the top team after 54 games is pretty awesome,” Smith said. “It’s one of a few goals we’ve set for ourselves and to reach our full potential gives us confidence heading into the playoffs.” 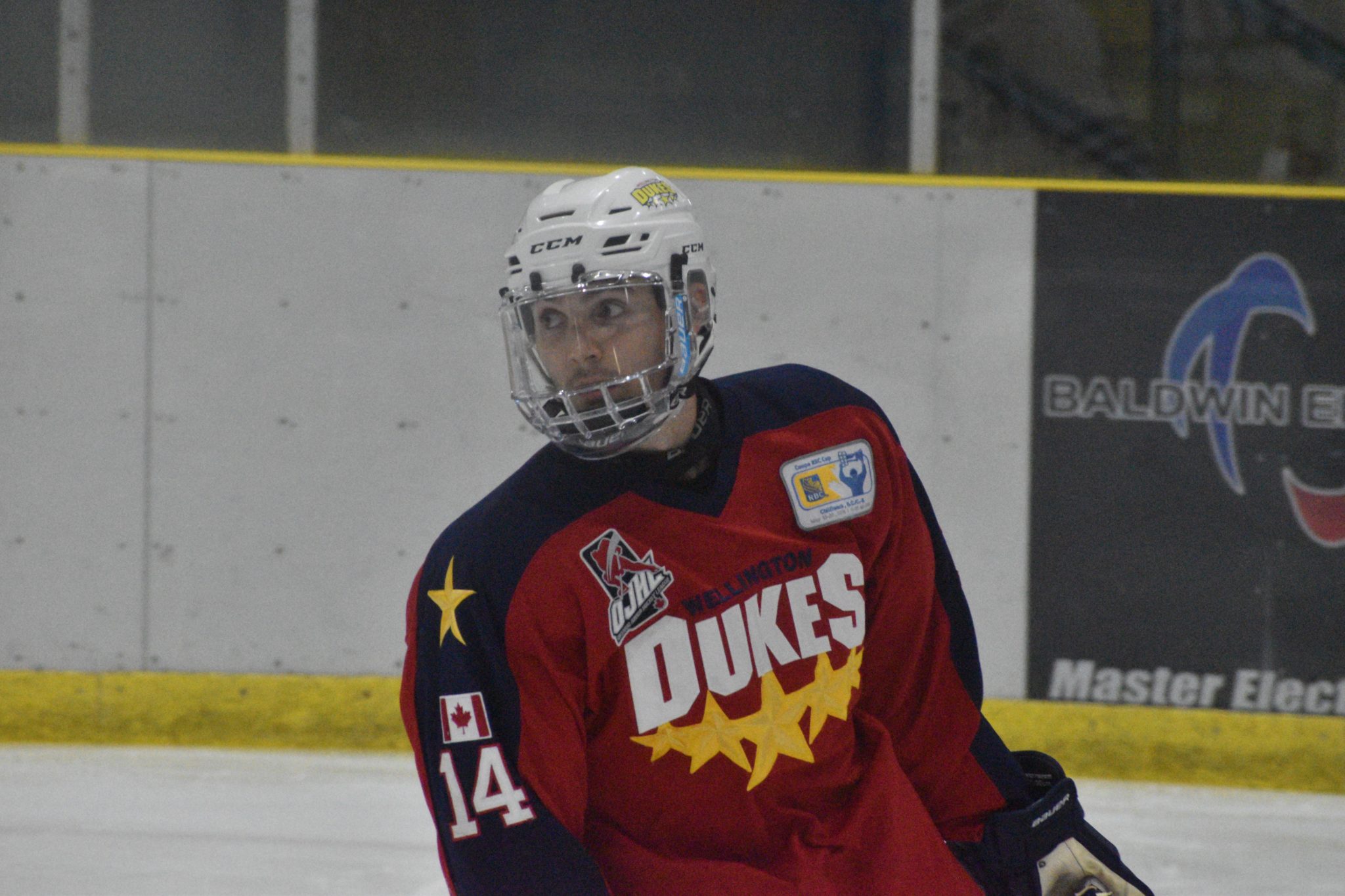 “Ken is committed to building an elite program in Wellington and we are so blessed to have someone like him committed and standing behind the Dukes brand,” Smith added. “Todd Reid and his staff with scouts Rob Ridgely and Don Cotton have worked tirelessly to make sure that we have the right pieces in place. We aim to combine development with a winning pedigree and that’s what we’ve accomplished so far this season.”

Wellington’s character was on full display on Friday night in enemy territory as over 1,000 packed the Duncan MacDonald Memorial Gardens to watch the final Battle of Loyalist Parkway play itself out.

Coming into the game, the Golden Hawks trailed the Dukes by point for top spot in the East. With Wellington holding a game in hand, Trenton was trying to put some pressure on the Dukes and at least hold an edge on the division title at the end of play Friday night.

And full credit to the hosts for coming out of the gates with a head of steam.

“It was an emotional game for sure and they came out with a really good start,” Smith said.

Julien Jacob would set up Jared Greger 4:06 into the contest to stake the hosts to a 1-0 lead.

That margin was doubled in the second when Sullivan Sparkes converted a Colin Van Den Hurk pass at 11:09 to make it 2-0 Golden Hawks.

But the game shifted and a Jacob unsportsmanlike conduct penalty at 12:34 provided an opportunity for Wellington to get into the game. 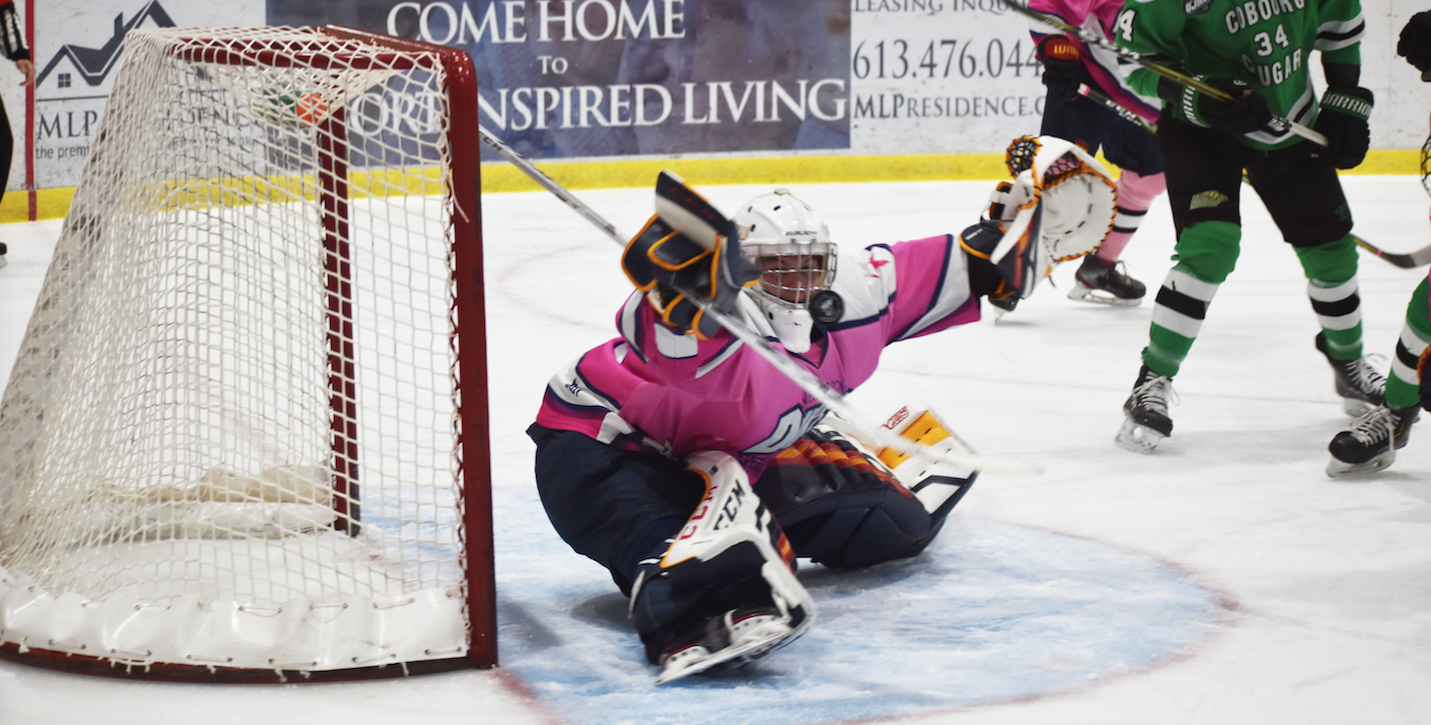 Just 11 seconds into the man advantage, James White blasted an Evan Miller pass through Trenton netminder Anand Oberoi to make it a 2-1 contest.

Down a goal heading into the third in a hostile environment, Wellington waited in the weeds for their chance to strike.

Finally, with the hour growing late, former Trenton player Ryan Smith would set up Ben Woodhouse for a tally with 2:40 to go to make it a 2-2 game.

The regulation point pushed Wellington safely into first place in the East on the basis of the tie break scenario and, with the OJHL title on the line, the Dukes wasted little time in sealing the comeback.

In the four-on-four extra session, Dawson Ellis would feed defenceman Quinn Hanna at the 3:55 mark to send the Dukes fans in attendance to the parking lot happy as his drive beat Oberoi clean and lifted the Dukes to a regular season championship.

“For Quinn to get that goal to win it was appropriate,” Smith said. “He’s come up for us huge so many times over the last two seasons.”

Not only breaking the hearts of Trenton hockey fans, Hanna’s goal also broke a tie for the OJHL points lead by a defenceman.

At the end of play Saturday night, Hanna led all rearguards with 16 goals and 41 assists for 57 points, clearing Golden Hawks defenceman Sam Duchesne by two points.

Not to get lost in the shuffle was Wellington netminder Matt Dunsmoor who made several big saves in the second period to keep the Dukes to within striking distance.

“Time and again he comes up big for us and we don’t have a chance to win that game in the third if he doesn’t make a big save in the second,” Smith added.

Coming off an emotional win a night prior, Smith said it was difficult for Wellington to get into gear at home on Saturday evening against Markham.

“On paper, the game didn’t mean much to us but we wanted to keep our winning streak going and only having nine losses in a 54 game regular season was something I’m sure the players were wanting as well as the staff,” Smith said.

Ryan Rosborough’s 16th of the year would stake Markham to a 1-0 lead midway through the first and Mathieu Halle’s goal just 1:16 into the second game the visitors a 2-0 spread.

But it was Wellington’s game from that point onward.

Flipping a switch, the Dukes started to enforce their will in the Markham end.

Jacob Breckles would fire home a shorthanded goal at 9:24 to get Wellington on the board and then a Noah Massie power play goal at the 14:35 mark tied the contest at 2-2.

At 5:30 of the third, Dylan Massie would pick up his second assist of the game as he set up Jake Gagnon to put Wellington ahead for good.

Woodhouse would fire home his 14th of the season 1:16 later to make it 4-2 Dukes and then Dylan Massie would set up Gagnon for his 31st of the season to salt it away for Wellington at 5-2.

Wellington starter Matt Keeley made 21 stops for his 19th win of the season.

Wellington will host the Cobourg Cougars on Friday night for Game 1 and it’s expected the Dukes will also host Game 2 on Sunday as the series will likely follow a 2-2-1-1-1 format due to ice availability and proximity to each other’s arena.

The series won’t likely be made available until after today’s play in game between Markham and Georgetown who are facing off at the Royal’s compound with final playoff spot in the Northwest Conference up for grabs.

In the other East series, Trenton plays Whitby.