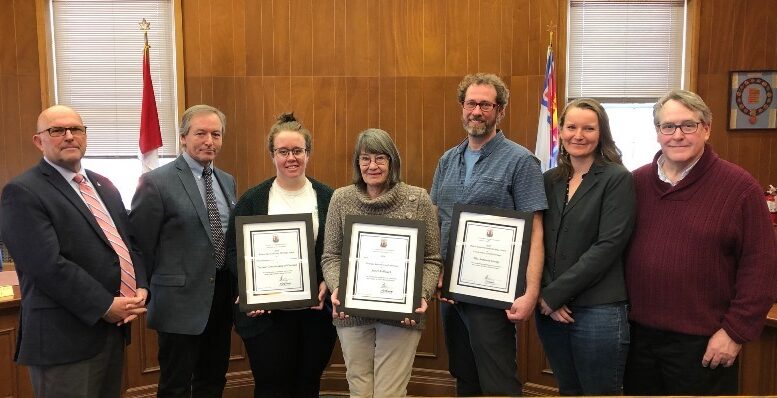 “Congratulations to this year’s winners. Their hard work and effort preserving and promoting the County’s heritage deserves much praise and recognition,” Mayor Ferguson says. “They have set an outstanding example for others to follow.”

With these awards, the Prince Edward County Heritage Advisory Committee recognizes individuals, groups and organizations in the community who have made notable contributions toward the promotion and preservation of local heritage.

Anyone who fits the above criteria is eligible and nominations from the public are encouraged.

The Conservation of Built Heritage is awarded for the preservation, restoration or protection of built heritage in Prince Edward County.

The 2020 recipient was announced as The Armoury Group. This group renovated the Picton’s historic Armoury building originally constructed in 1913 for the 16th Prince Edward Regiment and became the staging and recruiting headquarters of the famous Hastings & Prince Edward Regiment’s Second Battalion. Its current incarnation is a commercial multi-use space that includes retail, office and public-use facilities.

The Heritage Awareness and Advocacy Award is given for outstanding contributions in public advocacy on behalf of local heritage. The 2020 recipient was Janet Kellough, who has worked to promote county heritage through multimedia formats, from live performances, audio recordings, articles and interviews. Many of her works showcase Prince Edward County.

The Preservation of Cultural Heritage Landscapes Award is given for the preservation or protection of said landscapes in Prince Edward County. This year, the recipient was The Nature Conservancy of Canada (NCC) for its contributions to the Hudgin-Rose project. Together with their partners, NCC worked to create a 31-hectare (76 acre) conserved area on Ostrander Point Road in South Marysburgh. The surrounding landscape has a long natural and human history, with the property boasting a historic log cabin that dates to 1865.