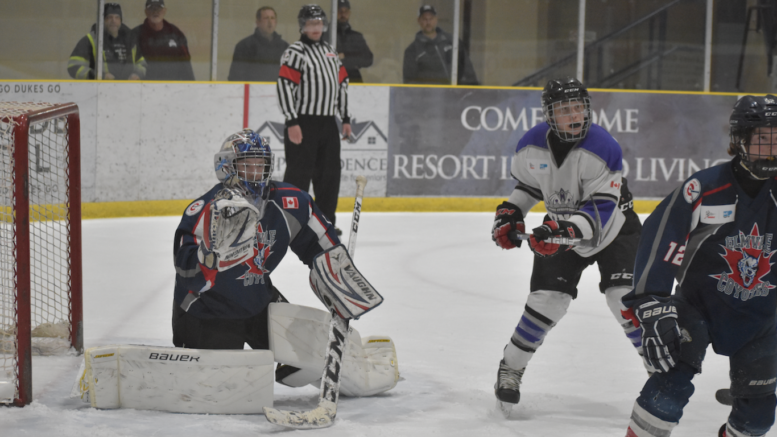 ELIMINATED- Bantam B Kings forward Liam Philip skates to a position in front of the Elmvale net. The Kings finished off the Coyotes and are moving on to the OMHA Semi Finals. (Jason Parks/Gazette Staff)

The Lehigh Bantam B Kings are moving on to the OMHA Semi-Finals after downing the Elmvale Coyotes this weekend.

After taking the first two games of the six point series in Prince Edward County the previous weekend, the Kings faced some adversity in Game 3 on Friday night and wound up losing a clinching game 3-2, their first setback of the 2020 minor hockey post season.

But the next day, the Kings rolled in Game 4, whitewashing the hosts 3-0 to punch their ticket to the All Ontario Semi-finals against the Listowel Cyclones.

The series starts in western Ontario with Games 1 and 2 at the Steve Kerr Memorial Complex this weekend and returns to Prince Edward County the weekend of March 7 and 8.

Kings bench boss Chris Rice said knuckling down and eliminating the Coyotes in a hostile environment a day after breaks of the game conspired against the locals was a testament to club’s character. 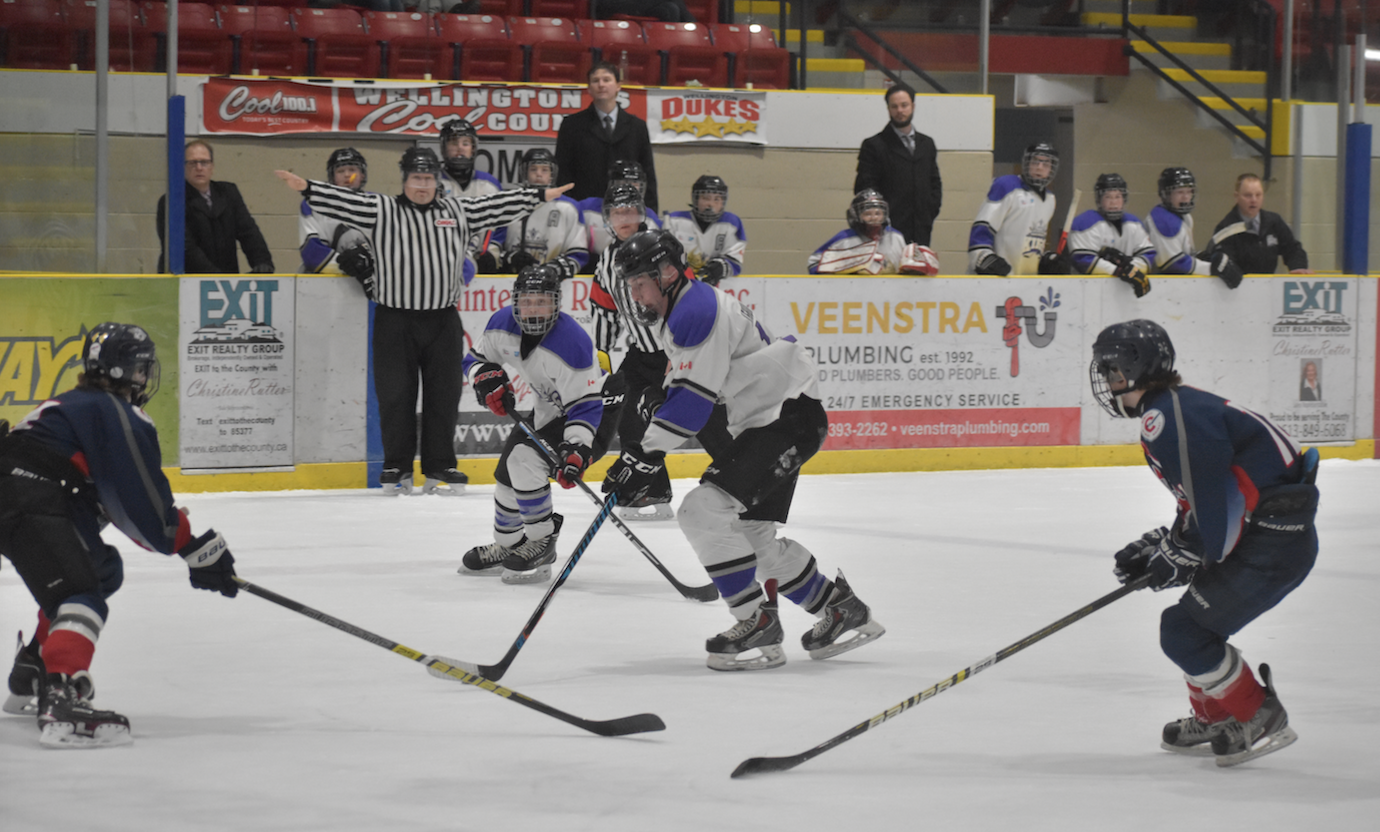 “I was really happy with the response we had on Saturday in Game 4. Players stepped up and did all the little things teams need to do in order to be successful in an elimination game,” Rice told the Gazette.

On Friday, the Kings and Coyotes were playing it even until the final minute of the first period when Michael Macneall beat Prince Edward County starter Austin Stock with 17 seconds left in the frame to put the hosts ahead 1-0.

Jordan Doxtator would have the response for the Kings thanks to a nice Keegan Zantingh feed at 6:48 of the second.

The score remained tied at 1-1 until 1:37 left in the second when Tanner Playne scored for the Coyotes to establish a one goal lead.

In the third, the Kings thought they had tied the game on Ben Smith’s nifty backhander off the rush  bounded in and out of the net before the officials could take note.

The Kings applied pressure in search of an equalizer and the Coytoes were content to kill the momentum by icing the puck in the late stages of the third.

One of the clearing attempts had all the characteristics of another icing call however, the linesman inexplicably waived off the infraction well after the puck had crossed the County goal line.

The Kings had stopped skating back to their end and were expecting an ensuing offensive zone face off when Jake Murphy would find Playne in the slot at 2:13 left in the game to make it 3-1 Elmvale.

The Kings didn’t quit and Liam Rice found Dakin Jones with 51 seconds left to get the game to 3-2 but the locals couldn’t muster an equalizer.

On Saturday, Stock was at his finest, blanking the Coyotes in a 3-0 effort.

“Austin was outstanding and I thought the penalty killers of Ben Smith, Riley Grimmon, Liam Philip and Gerrit Kempers were incredible. When we were down a man, they bottled the Coyotes up and wouldn’t let them have much by way of offensive zone time,” the coach added.

Kempers would set up Grimmon at 5:58 of the first to put the visitors ahead 1-0.

Grimmon was at it again in the second as Charlie Smith’s pass was converted to a goal at the 10:16 mark.

Late in the second, Kieran Young’s volley would find a home in the back of the Elmvale net to make it a 3-0 spread for the Kings.

In other Kings action, the Terra Vista Pee Wee B Kings didn’t have the luck of the Irish Sunday night as they fell to the hosts Parry Sound Shamrocks in the fifth game of in the OMHA Quarterfinals.

After going down by four points in Games 1 and 2 last weekend, the Kings rebounded nicely at Lehigh Arena in Games 3 and 4 Friday and Saturday.

After a scoreless first period in Game 3, the Kings finally broke the ice with just 1:28 left in the second as Nolan Elmy fed Jaxon Payne for the contest’s first goal.

The Kings almost made it to the third period with a 1-0 lead but a last second goal off the stick Shamrocks captain Nicholas Gray moved the score to 1-1.

With overtime looming and Parry Sound one goal away from eliminating the hosts in the six point series, Elmy would find Jake Payne with 3:17 left to push the hosts ahead 2-1.

Lainey Van Vlack was outstanding for the Kings down the stretch in goal and the locals survived to battle in Game 4.

On Saturday in Wellington, Van Vlack continued her mastery of the Shamrocks in a 3-0 blanking of the Parry Sound club.

Jaxson Payne’s unassisted goal 3:31 in was the game winner.

In the third, Payne would add a second marker and set up Connor Borton in the late stages of the frame to make it a 3-0 final.

On Sunday night in the heart of cottage country, the clubs would play to overtime.

Down 2-0 after one, the Kings showed tremendous heart in coming back in a game that ultimately reflected the ebb and flow of the series.

Griffin Lavender would deposit a Cam Billing feed at the 5:50 of mark of the second to make it 2-1 in favour of the hosts.

In the early part of the third period, Elmy set up Hayden Bender for an equalizer to make it 2-2.

Game 5 remained that way through the third and through most of overtime.

A tie would have meant a sixth game in Wellington Monday night but fate would not align for that dream scenario for the visitors.

Gray would pick up his third assist of the game as he set up Gavin Priaulx with just 48 seconds left, breaking the hearts of the Kings and their fans that had travelled to the Bobby Orr Community Centre.

The Pee Wee B Kings will now focus their attention on the 2020 Warrior tournament in St. Catharines next month.