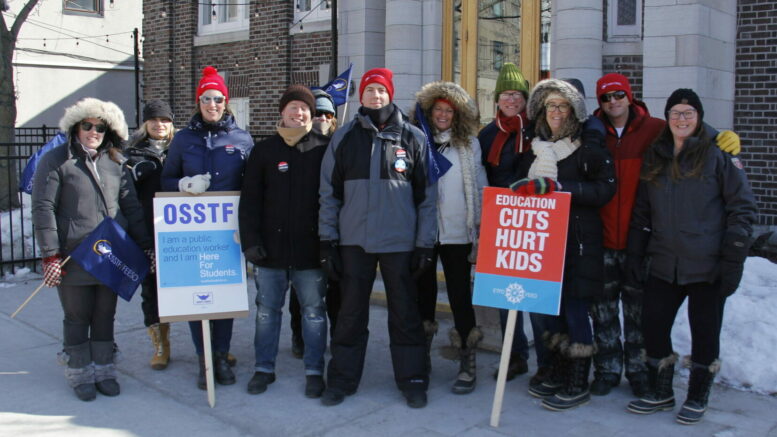 STANDING AS ONE On Friday the Elementary Teachers Federation of Ontario (EFTO), the Ontario Secondary School Teachers Federation (OSSTF), the Ontario English Catholic Teachers Association (OECTA) and the Association des Enseignantes et des Enseignants Franco-Ontariens (AEFO) held a coordinated one-day strike in solidarity across the province. Members of the aforementioned unions gathered in Picton for a local showing of solidarity. (Desirée Decoste/Gazette Staff)

With no progress having been made at the central bargaining table, Friday’s historic education labour action in Ontario lead to two million students having a second connesectiuve long weekend as relations between the province and teachers unions have been as icy as a mid-winter’s day.

Ontario’s four largest teachers’ unions traded lesson plans for picket signs with a full shut down of Ontario’s public education system and that was true in Prince Edward County.

Locally, teachers from various union groups gathered in front of the Picton branch of the Prince Edward County Library in a seldom seen public act of solidarity.

“I think having solidarity between these four unions shows how serious and important we feel this fight is,” OSSTF Strike Captain and PECI teacher Dave Lunn told the Gazette. “Regardless of which panel your in whether the public or the catholic board, it’s the students first and trying to protect the atmosphere and the environment of our schools, and I think everyone is really on board with that.”

Between strike days and bus cancellations due to snowy weather, there’s been frustration on the part of all parties however, spring is destined eventually emerge. Considering the tone and lack discussion at the bargaining table, a thawing of the ice between the unions and the province simply can’t be forecasted at this stage.

“It’s been really frustrating especially for elementary school teachers, every week only being in the classroom for two or three days sometimes because of snow days, so you never get a unit finished and you never get solidation of an idea,” expressed Lunn. “Trying to go from one day on to the next you need those routines in place and now their out of school 4-5 days straight so it’s tough.”

Several major issues remain as stumbling blocks between the province and the teacher’s unions including the role of seniority in hiring practices, funding for students with special education needs, class sizes and mandatory e-learning.

Friday’s demonstration was just one of several in the area including a mass protest at the offices of Bay of Quinte MPP Todd Smith.

“Under their regime they plan to undermine education by slashing thousands of teaching and support staff positions, increasing class sizes and privatizing education by forcing students out of classrooms through for-profit e-learning courses,” Marshall said. “Our local MPPs Todd Smith and (Hastings) Daryl Kramp have made it their priority to destroy public education in the communities they represent; our intent is to stop these cuts and restore the world class, inclusive system in place before they were elected.”

Education Minister Stephen Lecce fired back on Friday afternoon in a statement that said parents are losing patience with the union’s tactics.

“The focus of union leaders ought to be on negotiating a deal that keeps students in class. Our government will remain squarely focused on providing stability to students who face escalation by teacher unions far too often throughout their educational journey. We have demonstrated this focus on students during the negotiation process, by advancing educational priorities that matter: merit-based hiring, enhanced investments in student priorities and special education over union demands for more generous wages and benefits and committed – in writing – to protecting all-day kindergarten,” Lecce said. “Parents are losing patience with the union-caused disruption in their lives, the inconsistency in their children’s education, and the financial impact of scrambling for alternate care. That is why we will continue to stand with parents and offer financial assistance through the Support for Parents initiative, which is providing financial support directly in the pockets of working parents. While union leaders are continuing to organize further disruption, our government remains focused on getting deals that ensure students are learning each and every day.”

Sam Hammond, president of ETFO took particular offence to Lecce’s assertion that part of the dispute revolves around language in the collective agreement that forces school boards to hire based on seniority, even if the needed qualifications are lacking.

Hammond also wanted to illustrate that members have been dipping into their own pocket for supplies, just another instance where their dedication to instructing children supersedes the actual roles and requirements laid out by the Ministry of Education.

“During this phase of strike action, ETFO wants to highlight a long-standing concern, which is that teachers and educators have been filling in education funding gaps themselves by paying for classroom basics – books, paper, art supplies, technology, furniture and so on – out of their own pockets,” said Hammond. “These are items that should be covered by the Ministry of Education and school boards, but aren’t.”

“Using their own money to ensure their students have what they need to learn is just another example of the lengths our members will go to support Ontario’s public education system,” noted Hammond. “Unfortunately, this government’s inclination is quite different. It’s determined to pull much-needed funding out of our schools and undermine an education system that is consistently ranked as one of the top performers in the world.”

With supporters also comes the non-supporter. While interviewing the picket captain Friday on Main. St., a passing motorist could be heard yelling about Ontarians residing in poverty.

“We’ve seen a ton of support today, it’s been terrific. The number of honks to the number of ‘get back to works’ is probably 20-1, and there is one of them driving by now, but those are few and far between,” Lunn stated. “We get a lot of retired teachers coming down to support us because they remember being out in 1996 and 1997 and even our occasional teachers make a point of coming out and doing that. Other then being in the cold and not being at work its been a good experience, but we would much rather be teaching and helping the kids.”