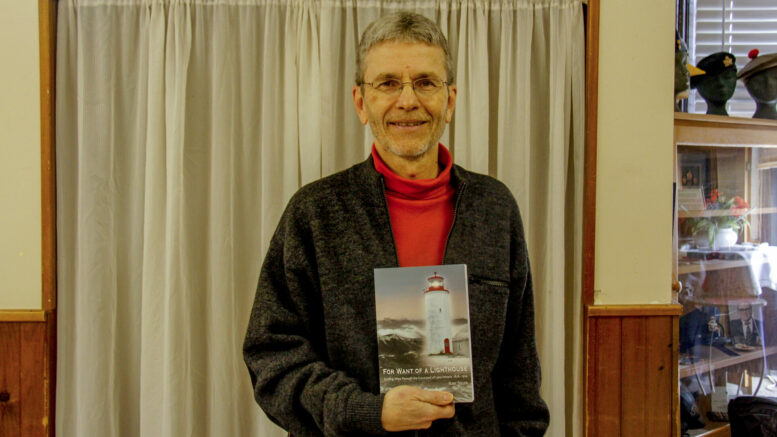 The Royal Canadian Legion Branch 509 in Consecon was packed Saturday as locals flocked to quench their thirst for knowledge on the marine history of Weller’s Bay.

As part of the ongoing Flashback February oral presentations scattered throughout Prince Edward County, local author and  maritime historian Marc Sequin presented a lively, informative and illustrated talk on the remarkable human and natural history of the adjacent body of water that flows from Lake Consecon and eventually spills into Lake Ontario.

Seguin is the author of several books encompassing the marine history of Lake Ontario and Prince Edward County including For Want of a Lighthouse: Building the Lighthouses of Eastern Lake Ontario 1828-1914 and The Cruise of the Breeze, an annotated journal of Henry Edward Bains: a young soldier and talented artist whose beautiful paintings and remarkable deeds have, until now, been largely forgotten.

In his presentation Seguin stated thousands of years ago at various places around Weller’s Bay, human settlement started and these settlements were likely made by one or more paleo cultures-The early society that used tools only made from bone, wood or stone.

“For centuries this area has been a hunting ground and was used as a passageway by war parties of various indigenous tribes. We know Étienne Brûlé and his boss, Samuel de Champlain, came this way in 1615 with a Wendat and Algonquin war party. They were on their way to upstate New York to attack the heart of the Onondaga nation,” Seguin said. “25 years later the Five Nations of the Haudenosaunee in return would’ve traveled the same route going the other direction to attack the Wendat mission at St. Marie on Georgian Bay. Eventually this whole area -New France- became a royal colony and King Louis the 14th sent the Carignan-Salières Regiment to Canada in 1655 to put a stop to this fighting. The regiment built forts and within three years there was peace between the French and the five nations.”

Seguin went on to speak of how it was only a temporary peace but terms had to be followed by sending missionaries to some of the five nation villages starting in 1668. Mission priests from Montreal were sent to run a mission at the Cayuga villages known as Kentsio or Kenté. But it only lasted a dozen years before the priests abandoned the mission.

Some of those early explorers and missionaries kept journals and made rough sketches of their travels and then sent this information back to Europe and there cartographers did their best to piece together maps of these new territories.

A 17th century map showed Lake Ontario and the site of the Cayuga village. Archeologists believe that this village may have been somewhere along the shores of Weller’s Bay, and perhaps even in Consecon.

Seguin went on to say none of the 17th century maps or early 18th century maps really shows Weller’s Bay. It was only with the influx of Loyalists into Canada after the American revolution that comprehensive land surveys were done and maps like the Aaron Arrowsmith map of 1796 finally shows a somewhat accurate depictions of the Bay.

“The earliest detailed map of Weller’s Bay is from 1802. Now it’s important to note it wasn’t yet called Weller’s Bay. This map shows it as Lake Edward,” stated Seguin. “The portage between the Bay of Quinte and Weller’s Bay, where Carrying Place is now there is a little narrow stream that ran through the barrier beach connecting Weller’s Bay with Lake Ontario. It wasn’t until after the war of 1812 when the Royal Navy surveyed much of the North Shore of Lake Ontario and this was one of the first times it was named Weller’s Bay on a map.”

A chart made in 1816 based on a survey done by Captain William Fitzwilliam Owen showed Weller’s Bay but the surrounding waters had different names- The Bay of Quinte was called Trent Bay, and Presqu’ile Bay was called Newcastle Harbour.

Why is it called Weller’s Bay?

Asa Weller is said to be the first permanent resident of european decent to settle along at Carrying Place along the Bay.

“The Weller family were originally palatine Germans who immigrated in the early 18th century to the U.S., settled in Vermont and around 1800 these late Loyalists came to Canada. Asa Weller built a log cabin on the north side of Carrying Place on its west end, near the shores of the bay that eventually took his name,” explained Seguin. “Within a few years he had built a strong brick house and the house is still standing on the corner of County Rd 64 were The Portage Road and Gardenville Rd. meet. That part of the bay that was closest to Asa Weller’s property, for a long time was informally known as Weller’s Bay, while the portion of the bay closer to Consecon was often called Consecon Bay. Quite a few decades later the entire lagoon was officially named Weller’s Bay.”

When Asa Weller settled in Consecon, the only efficient means of transportation from place to place was by water.

Bateaus and schooners were the earliest vessels on Lake Ontario and the Bay of Quinte and they were used quite extensively as both cargo and passenger vessels. By the 1820’s larger sailing ships and steam boats were also coming a common site on the great lakes.

When Asa Weller arrived on the shores of The Bay of Quinte, he saw the potential of the area as a major transportation hub.

“On the 1802 map Carrying Place had been used for centuries by the first nations peoples, they portaged their canoes through the forest between the Bay of Quinte and Weller’s Bay as they travelled along the north shore of Lake Ontario,” Seguin stated. “Well Asa Weller took this idea much further, he established a rail road across Carrying Place. He used hardwood rails and laid them from Weller’s Bay to the Bay of Quinte and he used a large ox cart on the rails to haul goods, people, lumber and even boats that were laden with cargo, all across the portage. Of course the locomotive he used was a pair of oxen and the rails were wood not iron, but this really was the first railway in North America.”

By 1830 the transportation hub on Weller’s Bay was a reality. Asa’s cousin William, who lived in Cobourg, established a twice weekly stage coach service between York, now Toronto, and Carrying Place.

“The whole Weller family seemed to have transportation in their blood,” said Seguin. “William’s son John Weller later became the chief engineer on the Welland canal and his name lives on in the name of the Welland canals north entrance which is Port Weller.”

Sequin’s discussion was sponsored by Friends of Weller’s Bay and supported by the Merchant’s Mill and Swiftsure Vessel Solutions.

For more information and/or to purchase a book please visit ontariohistory.ca