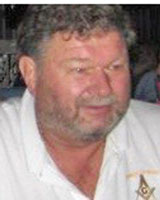 January 17, 1950 – February 19, 2019
Barry Herbert Swan was born In Penatanguishene, Ontario on January 17, 1950. He grew up in Simcoe County on the family farm, to Bert and Jean Swan. Barry went to SS#2 Flos Township school then to Elmvale District High School. Barry liked to tell stories about chasing cows into the barn then walking to school each morning. He was athletic and went to All-Ontario for track and field and played Elmvale minor hockey. Barry’s beloved mother passed away when he was 13, and he missed her throughout his life. After graduation, Barry went to California where he worked and toured. When he returned home, Barry got a  job with Hostess Potato Chips that grew potatoes on the farmland and much of the surrounding area. Mary Rose Loftus and Barry were married in 1970 and had their daughter, Tanya Jean while they lived in Hillsdale. Tanya was followed by 3 more girls, Tricia Marie, Amanda Rose and Mariah Marguerite. Barry moved the family to Prince Edward County with friend, Bruce McArthur to start a large potato farm in the sandy loam at West Lake. Together they grew acres of potatoes at West Lake Farms. After Bruce moved, it was time for a career change that took Barry to truck driving. He worked for Premdor Canada, in Toronto and Black’s Transport in Belleville then bought his own trucks to start Swan Transport in Bloomfield, Ontario. Barry won the Prince Edward County Business of the year award in 1988 and successfully ran as a Member of Council for Hallowell Township. Barry loved a parade, and was always offering his trucks to pull the floats, and to drive in various County and Belleville parades. He was proud to work with the Bloomfield Rec Committee to organize the first Bloomfield Nighttime parade. Barry was a member of Prince Edward Masonic Lodge #18 and the Belleville & District Shrine Club. Barry took pride in his community and never hesitated to help out with service groups or friends, neighbours and community members. There are many stories of Prince Edward County that Barry was involved in and loved to tell. Although he wasn’t born in The County, he was a County Boy to the core, and loved every inch of it, taking visitors on many tours of his adopted home. Barry had a large social circle, and if he was somewhere new it didn’t take long for him to make new friends. Barry lived at West Lake until he got sick, then stayed at Bayview Retirement Home in Belleville to recover. He quickly made friends in the home and the staff looked after him, but he kept them on their toes with his mischievousness and infectious laugh. Barry passed away at his beloved Prince Edward County Memorial Hospital on February 19, 2019. Barry was a proud Grandpa to his nine grandchildren, Nicholas, Olivia, Jackson Fox; Hayden, Hayley Kettlewell; Hanna, Sofie Carroll and Ayvah Dainard. He’s missed by his siblings, Brian and Lois Swan and Brenda Swan and Paul Beaulac and his many brother-in-laws, sister-in laws, nieces, nephews, aunts, uncles and cousins. His wife for over 35 years, Mary Rose Loftus misses their friendship and fun. His friends near and far live on through the stories and legends of Bad Bar. Those who loved him the most, his children, Tanya and Kyle Fox, Tricia Swan-Kettlewell, Amanda and Brian Carroll, Mariah Swan and Ryan Dainard, keep his memory alive through his grandchildren, his stories and visiting his favourite places in the county.   A limb has fallen from our family tree, I hear a voice that whispers, Grieve not for me. Remember the best times, the laughter, the songs. The good I lived while I was strong. Continue my heritage, I’m counting on you. Keep on smiling, the sun will shine through. My mind is at ease, my soul at rest, remembering all, how I was blessed. Continue traditions, no matter how small, go on with your lives, don’t stare at the wall. I miss you all dearly so keep up your chin, until that fine day we’re together again.