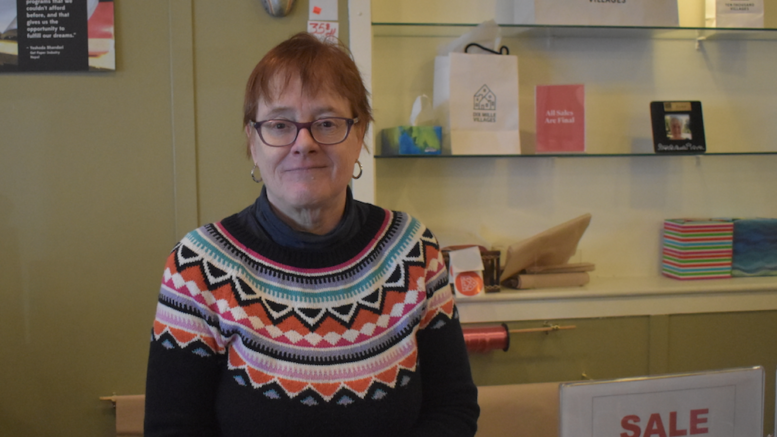 After nearly 75 years in business, Ten Thousand Villages Canada has announced the folding of virtually all of their franchises including the closure of the Picton location. Having opened on Main St. a decade ago, this closure will leave a gap in the otherwise dwindling market for sustainably sourced, fair-trade goods.

The store, which is largely volunteer-run, was made possible by a small group from St. Andrew’s Presbyterian Church. Initially, there were approximately ten volunteers, but that number fluctuated over the years. At one point, they had as many as 50 volunteers, though presently, the number is static at 15.

Store manager Catherine Reilly describes the news of the store closing as “tragic” but also explains the franchise has been struggling for a number of years. 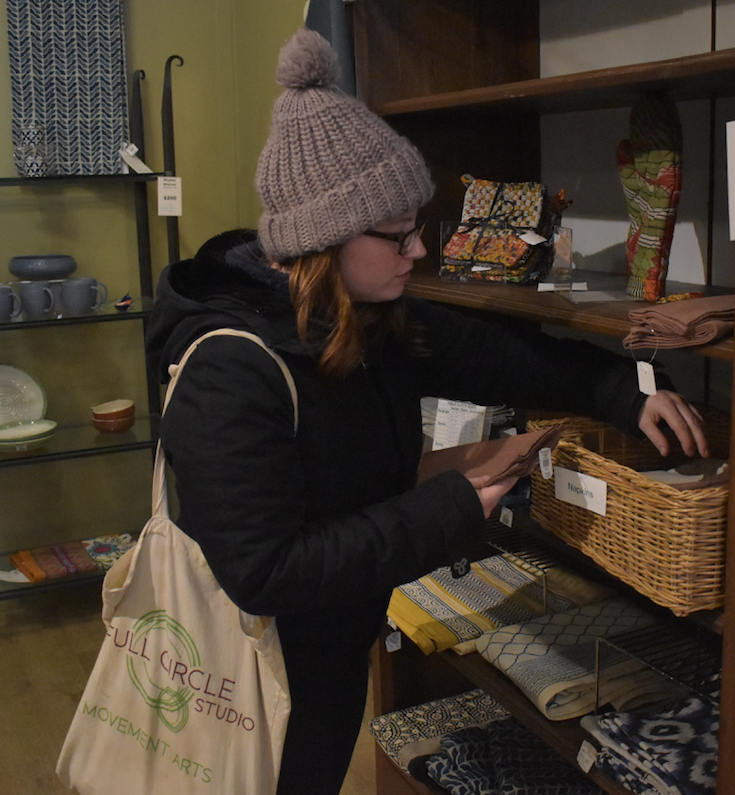 SALE AWAY – Patron Natalie Currie rifles through some linens on sale during the final week of Ten Thousand Villages in Picton. (Sarah Williams/Gazette Staff)

“At almost our 75th anniversary, it’s tragic,” she said. “It’s been a struggle for a number of years, with sales declining. The Picton store was doing okay, but we struggled with having enough volunteers.”

Despite the announcement of nation wide store closures, some will remain open. These are, as Reilly explained, stores that have the means to compensate for the loss of financial support from an umbrella company.

“It felt good trying to support an economic model that saw people lifted out of poverty in hopes that would inspire the public to always think ethically. Not just here, but when they shop for anything. If you’re getting things at a super low price, you have to understand, somebody is paying the price,” stated Reilly.

Reverend Lynne Donovan also spoke to the Gazette and described the closure as “another nail in the coffin of a way of doing business that is kind and just”.

“We live in a world where there is a huge discrepancy between the haves and have-nots and that discrepancy is growing. We live in a world that is fighting the catastrophe of climate change, the result of a particular economic model that relies on extracting resources from the Earth and using the Earth as a commodity,” commented Donovan. “I think for those of us who have a vision of a healthier planet, Ten Thousand Villages was one small but significant way of bringing poor people out of that subsistence model. It was a way of reaching out and practicing kindness and justice.”

For the artisans, supplying goods to Ten Thousand Villages meant not only a living wage, but also the promise of a brighter future, explained Donovan.

“On so many levels, it created hope for them and their children. It gave them dignity, community and shelter for their lives,” she said.

Donovan noted the two major injustices facing the world today are poverty and the “destruction of creation”. Ten Thousand Villages, she said, offered an economic model that could counteract those two challenges.

Unfortunately, the death of this franchise sparks more questions than answers, especially with regards to the public’s appetite for fair-trade goods.

“What kind of world do we want to live in? What does this mean in terms of what we think are our most important values as citizens of this country,” she questioned.

Despite the store closure, St. Andrew’s Presbyterian will still be selling Zatoun Olive Oil and Za’atar from Palestine. As well, according to Donovan, Penny’s Pantry will begin carrying Level Ground fair-trade, organic coffee.

The church also plans to maintain a strong relationship with the store in Cobourg, one which will remain open. They intend to bring a number of products from the Cobourg store to the county for a seasonal sale to be held each Christmas.

The Picton location will be one of first stores to close across Canada, with their final day slated to be March 14th. The store will be open from Tuesday to Saturday.

For more information about Ten Thousand Villages, including their closure announcement, please visit:https://www.tenthousandvillages.ca/Closure-Information