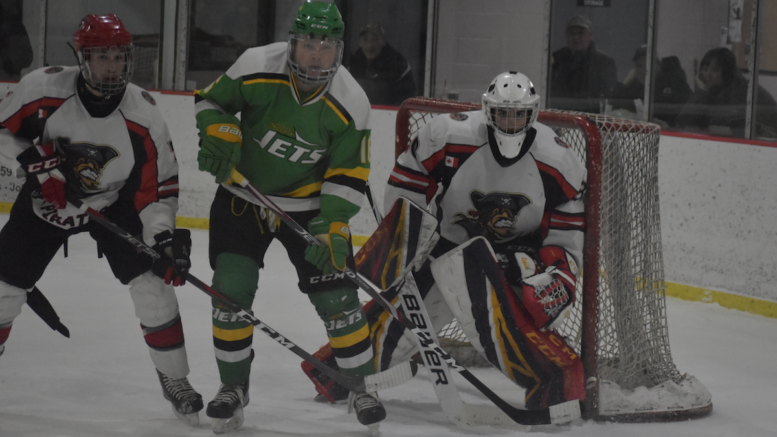 Picton Pirates goaltender Kyle Renaud has a goals against average of 1.75 through the first four games of the 2020 PJHL playoffs. (Jason Parks/Gazette Staff)

The Picton Pirates broke out the brooms on Saturday evening as they dusted the host Amherstview Jets 6-3 in Game 4 of their Tod Division Semifinal. 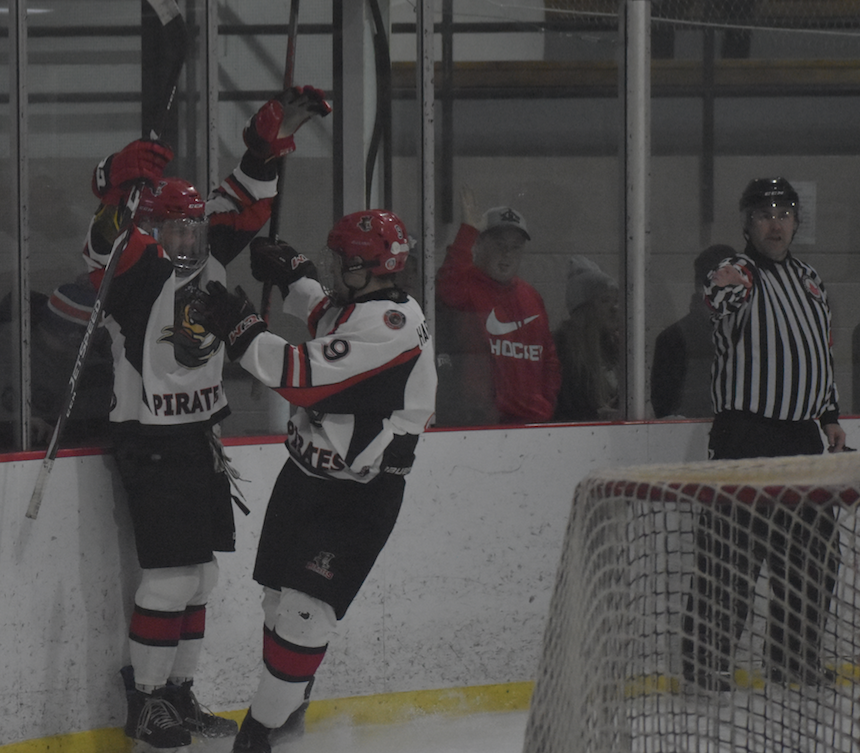 In the opening series of the Provincial Junior Hockey League playoffs, the Pirates were better than the Jets in several aspects of the game and that edge materialized into a four game sweep of Amherstivew.

Picton coach Tyler Green said the Pirates knew the series would be physical as that’s how the Jets played the locals in a number of regular season games leading to the 2020 PJHL playoffs.

Picton was able to withstand the charge then and followed suit in the second season.

“We needed to make sure we could answer the bell and not let Amherstview dictate the series,” Green said.

Up 2-0 heading into Thursday night’s Game 3 at Huff Estates Arena, the Pirates were expecting a desperate barrage from the visitors and the Jets would out shoot Picton 14-7 in the opening period.

But Picton’s Kyle Renaud followed up a Game 2 shutout with a masterful period of hockey, stopping all volleys sent his way.

At the midway point of the frame, Renaud’s quick up pass resulted in Brayden Adams netting his first post season goal of 2020 and staking Picton to a 1-0 lead.

Amherstview Jet Aiden Harris would finally break the shutout string 62 seconds into the second period to make it 1-1 but the Pirates didn’t wait long to get back on top of the visitors.

Nate Boomhower would feed Landon McLellan at 4:12 of the second in what would wind up being the game winning goal.

Later in the stanza, Picton’s leading goal scorer in the regular season finally found the range as Khaden Henry blasted home an unassisted effort with just over five minutes left in the second.

All things were going Picton’s way until the early part of the third.

Closing in on the Amherstview net, Boomhower tried to finish off a nice move by slipping the puck past Amherstview’s Brady Sarazin but was spilled awkwardly into the boards, injuring his surgically repaired shoulder putting the Belleville, ON native out of commission for the rest of the playoffs.

Boomhower laid prone on the ice for several minutes before paramedics took him to nearby Prince Edward County Memorial Hospital.

“It was a tough thing to see and Boomer was really starting to find his stride and get his conditioning back to where it was when he was so effective,” Green said. “He was a big part of our lineup over the last three games.” 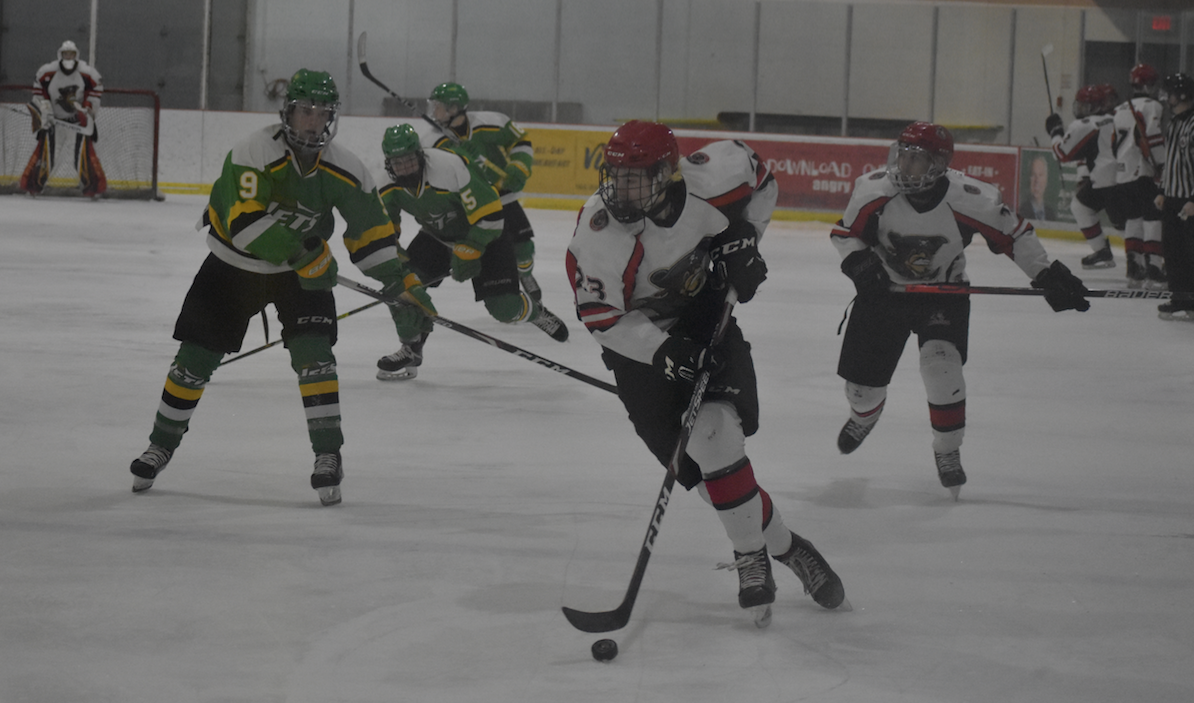 Within a minute of resuming play, Henry put on the razzle-dazzle and created a 2-on-1 rush where he fed Griffin Conger in front for a goal and a 4-1 lead.

“I was really happy with our response,” Green added.”It was obviously very emotional to see Nate go down but we had a good answer to the situation.”

Picton would hold on for the win, setting up a clinching scenario on Saturday.

The Pirates would take a lead into the third period of Sunday’s game at the WJ Henderson Arena only to watch evaporate and then jam a dagger straight to the heart of the Jets in the late going.

“The guys really stepped up and rose to the occasion in that scenario but we’ve really done well in the third periods of hockey games going back to the end of November,” Green said. “This team never gets down and can always find a way.”

A Conger power play goal late in the first put the visitors up 1-0 after 20 minutes.

In the second, Kurtis Wood set up Henry at 7:03 to make it a 2-0 lead but the Jets responded just over two minutes later with a Raymond Benoit goal to make it 2-1.

Adams would bang home his second in as many games early in the third to re establish a two goal cushion but the lead would vanish thanks to Harris and former Pirate Jaydon Wood at the midway point of the frame.

Tied at 3-3 with under five minutes to play and a chance to move on to the Tod finals, team captain Will Harrison rose to the occasion.

The Picton native who does his best work dishing the puck, would set up McLellan for the series winner at 17:19 of the third and them found Henry just 19 seconds later for a key insurance goal that grounded the Jets permanently for the rest of the season.

“He has a sense of the key moments and I know in his last season, he’s extremely driven right now,” Green said.

With Amherstview starter Andrew Lumb on the bench, Henry would cap off a hat trick inside the final two minutes with an empty netter to finalize the score 6-3.

Picton will now take on Napanee who swept Gananoque in four games in a Tod Division final most PJHL observers in this part of the province have been expecting since the Pirates nailed down second place.

“We know they have tremendous speed and depth and we will have to be at our best every shift. It will take a total team effort to have some success,” Green said.

Game 1 will be played Friday night at the Strathcona Paper Centre with the rest of the series schedule to be announced some time this week.