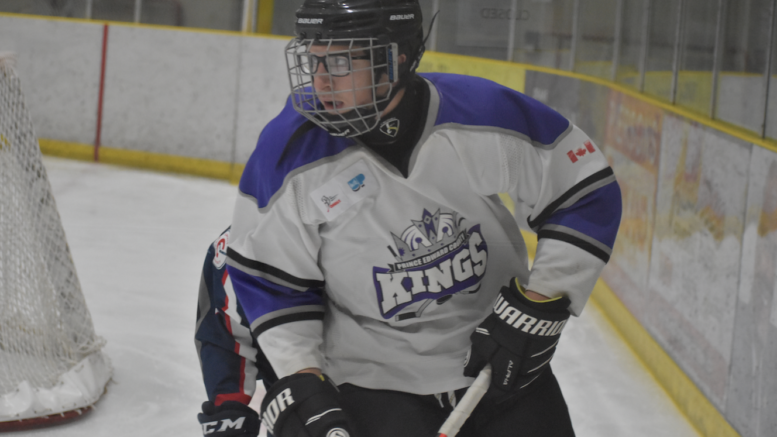 Keagan Zantingh and the Lehigh Cement Bantam B Kings earned a split in the opening weekend of their OMHA Semi Final series against Listowel this weekend. (Jason Parks/Gazette Staff)

The Lehigh Cement Prince Edward County Kings might not have been of a ‘glass half full’ mindset after blowing a one goal lead with 12 seconds left in Game 1 of the Ontario Minor Hockey Association Semi Finals against the Listowel Cyclones but the locals are satisfied to be coming home with a 1-1 split after a visit to western Ontario this weekend.

The Kings bounced back from a tough 4-3 overtime loss in Game 1 on Saturday to take Game 2 4-2 on the strength of a Liam Rice hat trick Sunday afternoon.

The series resumes Friday night at Lehigh Arena for a 5:30 p.m. puck drop for Game 3. Game 4 of the six point series is scheduled for Saturday night at Lehigh at 6:30 p.m.

Having no way of knowing what to expect from their opponents at this stage of the OMHA Playdowns, Kings bench boss Chris Rice agreed that heading into the series, if someone had told him the Kings would have a split of the first two games with Games 3 and 4 in Prince Edward County, the team would have likely signed on that offer.

Still, it’s tough for the Kings not to play the ‘What if’ game considering how close the team was to sweeping the first two contests of the series.

“We’re happy with getting out of there with two points but the defensive zone breakdowns in Game 1 were something we needed to address and I thought we looked after the puck a whole better in Game 2,” Rice told the Gazette Monday.

The locals would break the ice when Dakin Jones would feed Riley Grimmon for the series’ first tally at 11:30 of the first.

The lead was doubled in the second when Gerrit Kempers turned in some nice work from below the goal line and fed Reese Kleinsteuber in front at the 6:30 mark.

The two goal lead lasted just over three minutes as the Cyclones and Harrison Meulensteen would capitalize on a delayed Kings penalty at 3:12 to make it a 2-1 game.

The Kings would strike early in the third as Liam Philip found Grimmon above the face off dot just 57 seconds into the frame to extend their lead to 3-1.

But the locals would have a tough time taming the Cyclones and Rowan Alexander’s point blast at 9:12 of the third went though a maze of legs and past Austin Stock to make it 3-2. The last minute seemed to be going all right for the Kings but the video evidence would show that with just over a dozen seconds left, three locals would congregate at the blue line to try and swallow a Cyclones defencmen who was lurking with the puck.

Inexplicably, all three Kings left the zone atnticiaping a clearing attempt that never came and Jeremy Hamilton’s shot from the high slot would elude Stock with 12 seconds left on the clock to knot the score at 3-3.

The hosts would finish off the comeback in similar fashion with just over three minutes left in the extra session as Meulensteen’s high zone tip of a Nathan Coverdale point shot skipped past Stock and into the Prince Edward County net at 3:06 to give the hosts an overtime win.

“Listowell’s last two goals were bad sequences where we did the wrong things at the wrong times,” Rice said. “We had a video session with the players after the game to show them what went wrong and what a better decision would have looked like.”

For the second straight game, the Kings would open the scoring and, after some sustained pressure in the Listowel end, Liam Rice’s slap shot from the point eluded Listowel netminder Tristan Dietrich and found a home in the back of the net at 9:26 of the first.

The hosts would get that goal back at the end of the frame as Reid Williams would walk to the Kings net from the boards on a man advantage and slip a backhander past Stock at at the 1:10 mark to make it 1-1.

The Kings would forge ahead in the second as a Kempers offensive zone face-off win was helped back to the blue line by Jordan Doxtator to rearguard Rice.

The captain would rip another point blast that eluded Dietrich at 10:14 off the second to push the Kings ahead 2-1.

But as was the case in the first, a Kings penalty led to a Cyclones power play goal as Meulensteen’s man advantage effort at 13:07 tied the game at 2-2.

Perhaps sensing another game was slowly slipping away from them, the Kings successfully killed off a penalty in the fourth minute and, with just over two minutes left, Philip and Grimmon would blow the defensive zone on a 2-on-1 rush.

Philip would draw the Listowel defenceman away from the puck carrying Grimmon and the Kings centreman would fire the disc past Dietrich and into into the Cyclone net at the 2:07 mark.

With Dietrich on the Listowel bench, Stock was called upon to make a couple  of clutch stops and then, with the puck mired in the Cyclone end, Rice stepped up, intercepted a pass and lifted the biscuit into the yawning cage with 46 seconds remaining to make it a 4-2 final in favour of the Kings.

The Ayr Flames lead that OMHA Semi Final series 4-0 with Game 3 slated for Wednesday in Petrolia.