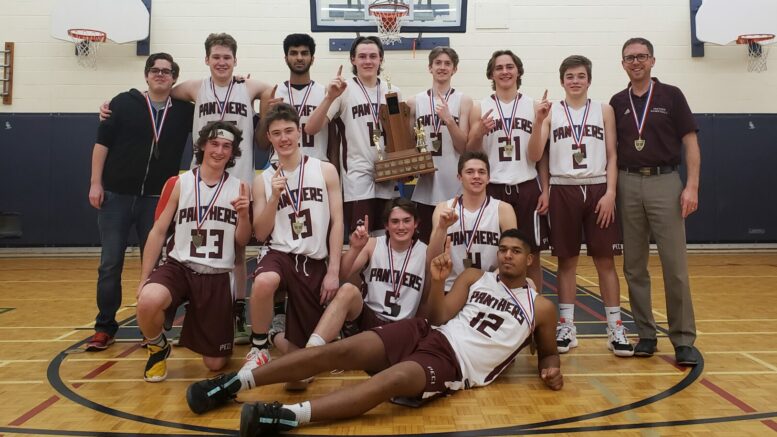 PECI comes back on Nicholson to win COSSA crown in Norwood

The PECI Panthers are heading back to the Ontario Federation of School Athletic Association’s (OFSAA) boys basketball championships thanks to a come-from-behind win over the Nicholson Collegiate Crusaders Friday afternoon.

Undefeated in the regular season, the Panthers were looking to redeem themselves at the Central Ontario School Athletic Association (COSSA) tournament in Norwood last week after PECI was relegated to the sidelines of the Bay of Quinte Championships after a semi-finals loss to eventual champion Centennial late last month. 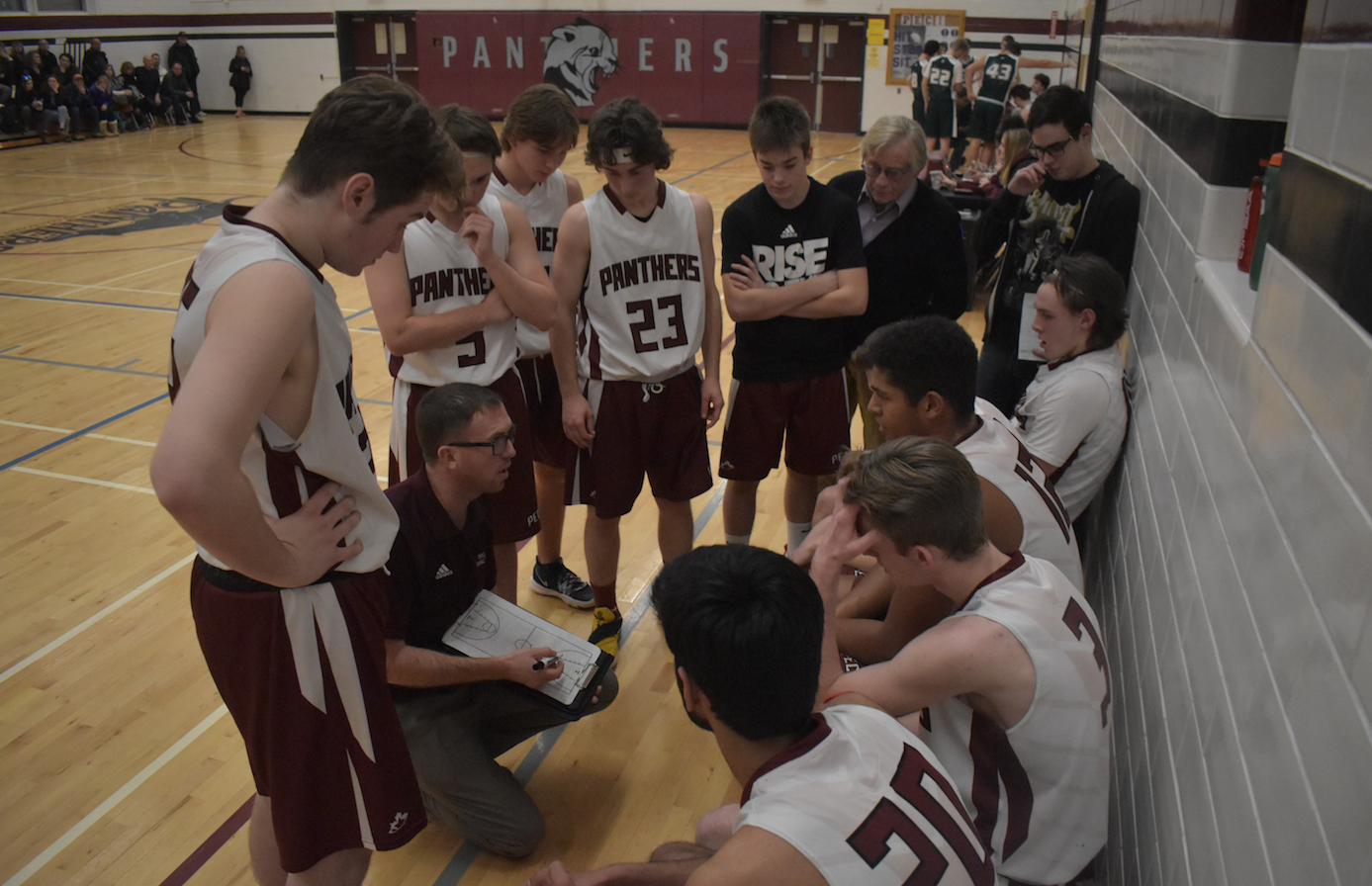 PECI Coach Rob Garden speaks to his players at a game against Nicholson earlier this season. (Jason Parks/Gazette Staff)

PECI coach Rob Garden said the club could have dwelled on the fact such a starry team was unable to secure the 2020 Bay of Quinte championship in Senior Boys Basketball but chose not to and focus on making the OFSAA tournament for second time in as many seasons.

“Not making Bay of Quinte was a bump in the road and that title was a goal for this group but as we said all season, you can win Bay of Quinte and fall short of qualifying for OFSAA,” Garden told the Gazette. “We were able to roll in the first game and make some key adjustments to come out on top in the finals.”

The Panthers kicked off Friday’s action drawing  Haliburton Highlands and Garden said the Panthers faced a test against an athletic Red Hawks team.

“I know a lot of our players recognized them from hockey and we needed to be sharp to match their athleticism,” Garden said. 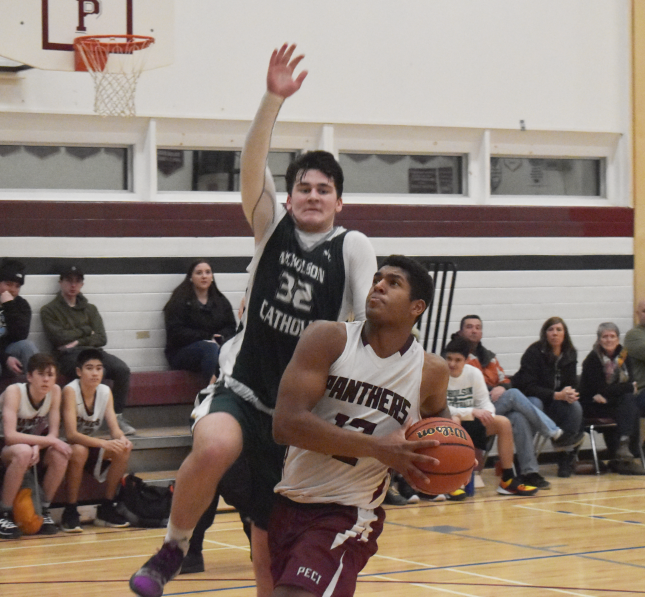 PECI was buoyed by the return of forward Alex Arsenault who has been on the shelf for six weeks with a broken hand but was medically cleared in time for Friday’s action.

The Panthers’ big man showed little rust as he went off for 27 points and six rebounds as the PECI grounded Halliburton Highlands 50-27.

“Getting Alex back was a massive boost for the team in a lot of ways and it was good to see him doing what he loves,” Garden added.

PECI would renew its rivalry with Nicholson in the finals after the Crusaders slipped past the host Norwood District High School Knights 57-32.

The teams only met once prior to Friday’s COSSA Finals which was a PECI win back in January and Garden said the locals reached to that Bay of Quinte regular season showdown for added confidence.

However, the Crusaders came to play and gave PECI fits with a full court press off the opening tip.

“I give (NCC) full credit for coming out tough and forcing us to struggle out of the gate,” the coach added.

PECI went to the locker room at half time down 18-11 and some soul searching was in order.

“We went into the locker room and this collection of players had enough maturity that I could ask them “What do you want to do?” and they all said “Press them back,” Garden said.

PECI would put pressure on Nicholson to start the second half and the new defensive scheme totally changed the rhythm and dynamic of the game as the Panthers erased the Crusader margin and pulled away.

Arsenault would put up 10 points and had seven rebounds but would end up in foul trouble late and was forced to sit out the final four minutes of the game.

PECI fifth year senior Dylan Morrow said the Panthers had to summon the resolve to defeat Nicholson from within after Arsenault checked out with five fouls.

“There were a lot of guys who stepped up,” Morrow told the Gazette. “Ryan Doolan really played well in the last few minutes and Cooper Rogers was really good in our half of the court.”

Even after PECI bowed out early in the Bay of Quinte championships, Arsenault said it always seemed like the Panthers and Crusaders would be meeting on the floor in Norwood with a trip to North Bay hanging in the balance.

“I think we’ve had the confidence that we would control our own destiny even after we missed out on Bay of Quinte. Honestly, it was a little bit of revenge and payback for soccer,” Arsenault said with a laugh, referring to the Panthers being denied a COSSA Senior Soccer crown by the Crusaders in the fall. “They denied us an OFSAA opportunity at soccer so we took away their basketball shot.”

PECI was honoured at Sunday’s Ontario Junior Hockey League playoff game in Wellington between the Dukes and the Cobourg Cougars and Dukes fans happily chipped in some travel money for the team.

“We are pretty fortunate we live in such a supporting community,” Graden said. “A number of parents reached out to Randy Uens and the Dukes organization and they gladly offered to have us drop the puck.”

Over $700 was fundraised Sunday and Garden is appealing to local businesses, friends of the program and alumni to chip in and help cover travelling expenses.

“It’s a huge cost- the school provides one third, the players contribute one third and then we fundraise in the community for the other one third. If anyone wants to contribute and help us represent Prince Edward County next week in North Bay, we ask them to contact the school at 613-476-2196,” Garden added.

Having participated in PECI’s first-ever OFSAA appearance in Hamilton in 2019, Arsenault said the Panthers, especially those Grade 11 players suiting up for an Ontario championship for the first time, to treat the experience as just another tournament.

“My advice is to control what they can control and just soak it all in,” Arsenault said.