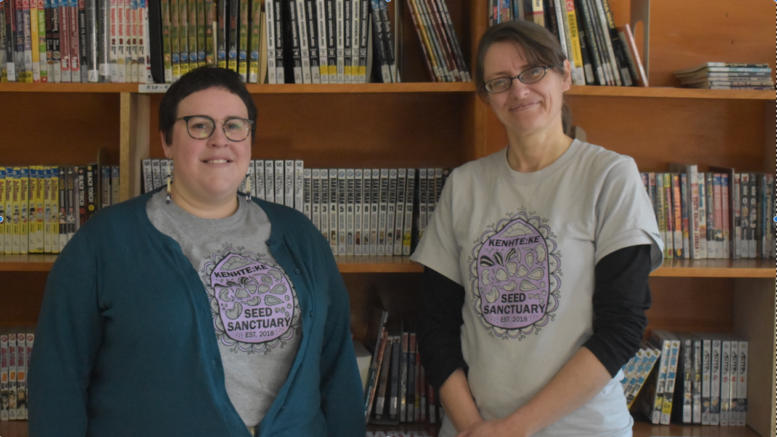 SPRING IN THE AIR - (L-R) Erica Gray, volunteer at the Kenhteke Seed Sanctuary spoke alongside Cate Henderson from the Sisters of Providence Seed Sanctuary in Kingston. (Sarah Williams/Gazette Staff)

The 11th annual Seedy Saturday took place at PECI this past Saturday, drawing close to 800 people. The event featured a host of speakers and vendors, but most importantly, it provided an opportunity for people to gather, swap seeds and begin planning for the upcoming growing season.

Seedy Saturday is just one of many seed swapping events that takes place annually across the country. These events were started by a group known as Seeds of Diversity (SOD), whose mandate is to preserve and share seeds, thereby improving access to seeds while safeguarding biodiversity.

According to their website, during the past century, 75 per cent of food crop varieties have become extinct, while a small number of corporations control 10 per cent of the remaining varieties.

SOD argues biodiversity is an important natural tool that helps species withstand threats, from disease and pestilence to climate change. 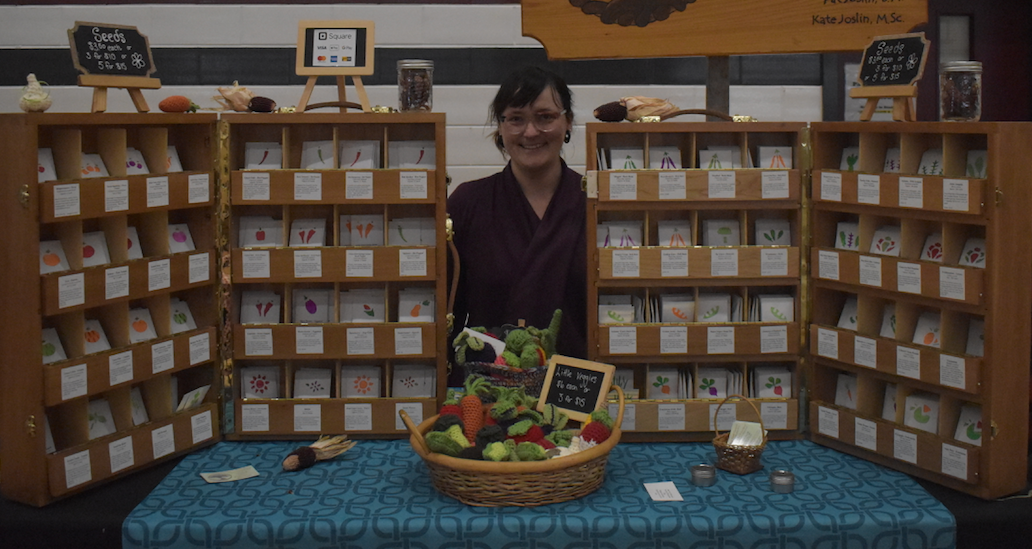 With this in mind, various heirloom, organic and other seed varieties were available for purchase, to swap, or simply to take for free.

Christine Renaud has been helping to organize the local seed swap since it began. She noted the event is always free and always community driven.

“Even though we have 30 vendors, the centre of the event is the seed exchange table,” she emphasized.

Erica Gray of the Kenhte:ke Seed Sanctuary and Learning Centre (KSSLC) in Tyendinaga spoke to a crowd of close to 30 who gathered to hear about the practice of seed saving and some of the work being done at the sanctuary across the bridge.

According to their website, the mission of KSSLC is to cultivate a sacred space to grow, preserve and protect heirloom and Indigenous seeds in accordance with the Rotinonhsyon:ni cosmology and ensure the availability of healthy, viable seeds for the collective, future generations.

This initiative focuses on keeping seeds in the public domain, as opposed to the private, corporate one. They began two years ago, with the “rematriation” of 300 different seed varieties from the seed sanctuary in Kingston.

Some of the seeds have a long-standing relationship with the Haudenosaunee people.

Gray informed the audience of the varied events held at KSSLC throughout the year, while highlighting the great need to rehabilitate the practice of seed saving along with the traditions surrounding it.

One such tradition is the practice of singing to the seeds to wake them up in spring.

“I love the concept of seed-singing. To me, it’s about building a relationship with the seeds,” said Gray. “When we harvest them and save them in the fall, we put them to sleep. Then, in the spring, when we bring them out again, I look at it as waking them up. The songs are songs of gratitude and positivity. They’re about letting these seeds know how important they are to us, our survival and our future generations.”

The songs, as Gray points out, are part of an ancient tradition, and are some of the oldest songs known in the Mohawk culture.

Gray further explained that many of the seeds came from the Sisters of Providence of St. Vincent de Paul Heirloom Seed Sanctuary.

“That’s a theme you’ll find with a lot of Christian organizations,” said Gray. “There are a lot that are involved with ecological, food-based work. It’s kind of a neat cross-over.”

Gray describes her own, revitalized interest in seed-saving as a way to positively impact not only her own life but the larger food system.

“For me, personally, we always had a garden. We would can foods every fall. But when I moved to the city, I lost that part of who I was. Then, when I came back here, I got involved because I’d been working at a grocery store and started thinking about the food waste there and how that pertains to larger food systems. So, for me, it started out as a way to explore alternative food systems,” she said.

Gray also explained that the seed sanctuary is not just for the Tyendinaga community but for the region at large.

“It’s for everybody who has an interest in saving seeds and wants to be a part of keeping them for future generations,” she enthused.

Seeds from KSSLC are not for sale, but will be distributed. Donations are accepted.

“Our intent for the future is, once we’re more established, to start running programs and workshops just addressing different things-from gardening, seed saving, traditional fertilization and agricultural techniques to how we can modernize those techniques,” she explained.

For more information about seeds of diversity, please see: https://seeds.ca/sw8/web/home