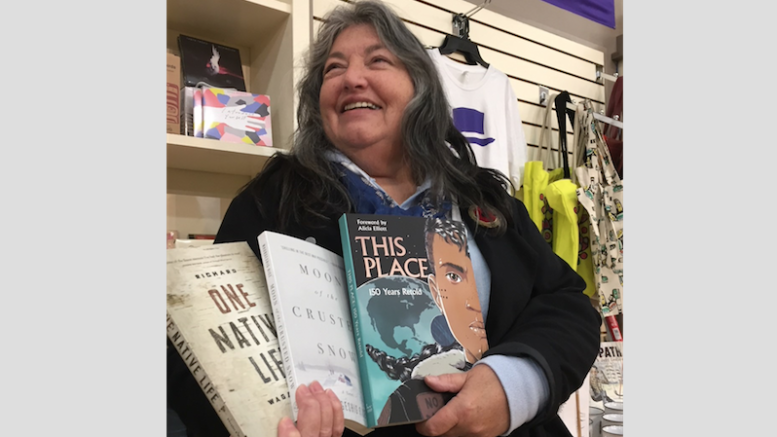 A retired librarian at the public library in Tyendinaga will be in Picton Sunday, March 15 as part of the second annual County Reads Indigenous Literature at St. Andrew’s.

Karen Lewis served at the Kanhiote Public Library for nearly three decades before retiring in 2017 and will be the host of an engaging conversation regarding five books about Indigenous life, culture, heritage and history.

“Our goal is to further acquaint ourselves with the voices, stories, and perspectives of Indigenous North Americans,” said Lynne Donovan, minister at St. Andrew’s. “Now more than ever, we need to better understand our history and attend to those perspectives and voices that were annihilated for so long.”

One of the highlights of Ms. Lewis’s career was welcoming Richard Wagamese to  the Kanhiote LIbrary in 2014 as part of First Nation Communities Read – a program wherein First Nation librarians in Ontario chose a title for all to read and the author of the chosen title then visited a few of First Nations libraries.

These selections will be presented by local journalist and historian Peter Lockyer, writer and former County Councillor Monica Alyea, photojournalist and artist Terry Culbert , teacher Kelsey Howe and youth counsellor Peter Berg. The presentation will be followed by a conversation and questions from the audience.

• How Native Americans Transformed the World by Jack Weatherford which highlights the gifts of Indigenous culture to the world in the area of farming, land use, medicine and architecture.

• Two Roads by Joseph Bruchac was written for sixth graders. Born in Saratoga Springs NY, Joseph Bruchac or Sozap- his Abenaki name- is an award-winning poet, novelist, and storyteller, who follows the traditional ways. He has been a storyteller-in-residence at the Onondaga Indian School and the Akwesasne Mohawk School.

• My Conversations With Canadians by Vancouver-born author, poet, artist, and activist Lee Maracle who is a member of the Stö:lo Nation. The book is a collection of essays penned to address questions posed to her by Canadians over the course of her career.

• Empire of the Wild by Metis author Cherie Dimaline is “set in the small towns, reservations, graveyards, and Walmart parking lots in and around Georgian Bay where the author grew up. Popular  culture blogger Jen McNeely called the work a “gritty love story and chilling mystery, as well as an exploration of Indigenous life in Ontario today, from family dynamics to ongoing oppression.”

• Medicine Walk, the ninth novel by Richard Wagamese, an Ojibway from the Wabaseemoong First Nation in Northwestern Ontario, speaks to the complexities of the relationship between a son and his estranged father.

The event starts at 2 p.m. and a free will offering is accepted at the door. Books will be available for sale on site following the event