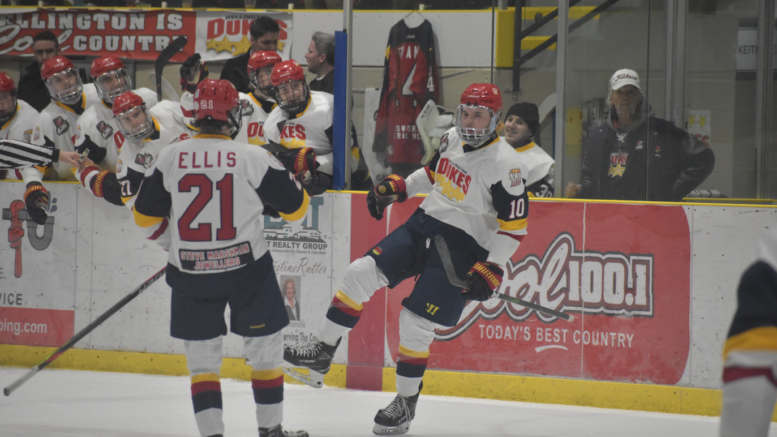 Wide open open or close to the vest, the Wellington Dukes are showing they can adapt to how ever the opposition wants to play it in the 2020 Ontario Junior Hockey League post season.

Lay back and defend the blue line? Wellington will lie in wait and patiently develop their chance to score.

Open it up? The Dukes can better any fire power that other teams in the OJHL can muster.

Credit Cobourg Cougars bench boss David Demarinis, one of league’s best young hockey coaching minds, for trying to find a way to best his opposition in the opening round of the 2020 Buckland Cup play downs.

But even when Demarinis and the Cougars have changed the questions, the Dukes have still had all the answers so far in the best-of-seven East Division semi finals.

After winning Games 1 and 2 at home on the weekend, Wellington was in Cobourg on Monday for Game 3 and outlasted the hosts 5-3, pushing the hosts of the brink of elimination when the two teams return to the ice at the Cobourg Community Centre Thursday.

In Game 1 on Friday, the Cougars rarely employed much a forecheck and decided to clog the middle of the ice in order to protect the area in front of netminder Dershahn Stewart.

A deflection from the stick James White off a Cougar leg at the goal mouth at 14:12 of the second after some great work by Quinn Hanna was enough to trick Stewart and give Wellington their first lead of the series. 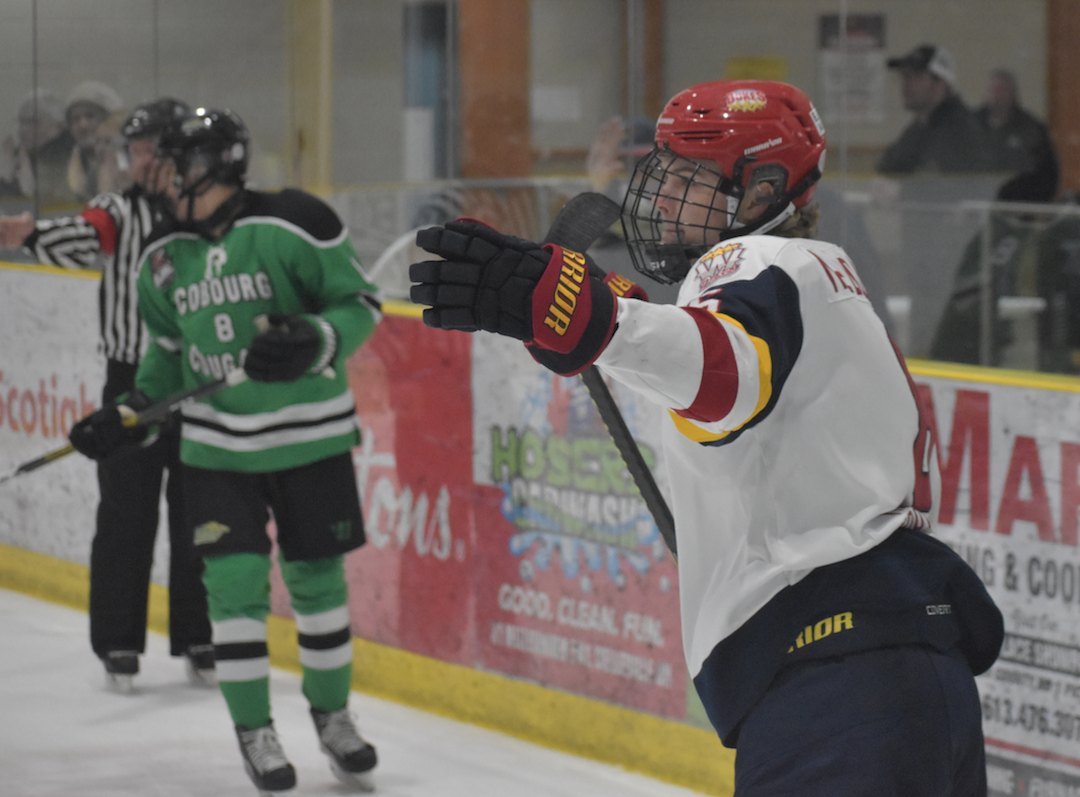 Coburg continued to defend and keep the Dukes to the outside of net but a seeing eye shot from former Cougar Jacob Breckles at 6:24 of the third gave Wellington a 2-0 lead and a tough hill for the visitors to climb considering their tactics to that point.

Wellington would add another just to be sure there would be no magic coming from the Cougars and it was another former Cobourg skater coming back to haunt his previous team.

White would feed Evan Miller in the slot for a one time that Stewart made a save on but Brodie McDougall was there to fire home a rebound with exactly seven minutes left to make it a 3-0 spread.

Matt Dunsmoor wasn’t busy but did manage to stay sharp and stop all 16 Cobourg volleys for a shutout.

In Game 2, the clubs would again skate to a scoreless draw over 20 minutes and it would be host Wellington opening the scoring in the second.

Brett Humberstone would play pitch and catch with Ryan Smith before taking the puck at the blue line and firing it through a maze and past Stewart 2:47 into the second stanza.

just over four minutes later, Smith would have the set up again as a give-and-go from the goal line allowed White to sneak to the slot and fire a puck five hole past Stewart into the Cobourg net.

A string of 108:27 of shutout hockey by Dunsmoor was broken midway through the third when Stephan McDonald found Mitch LaFay in the slot for the Cougars first tally of the series and the visitors suddenly had life.

The Dukes would go down two men on minor penalties a few minutes later and Nick Aromatario’s point shot off a face off in the Wellington end caught the post and bounded into the host’s net to tie the game at 2-2.

Coburg didn’t wait around to squander their power play opportunity and TJ Koufis would give the Cougars their first lead of the series at 12:09, just under a minute after Wellington had surrendered a lead.

But the Dukes had a mand advantage solution of their own and, naturally, it was Hanna who delivered as he has time and again for Wellington.

A fired up Hanna ripped a wrist shot low past Stewart with 5:01 left in the frame and had some emotion of his own to project at the Cobourg bench as the game was deadlocked at 3-3.

In overtime, Wellington had a pair of chances to win it early as Frank Vitucci caught iron with his attempt off the rush inside the first minute and Stewart had a fine glove save off a Justin Paul breakaway from the blue line.

Finally, like a cat toying with a mouse, Wellington put the Cougars to bed at the 11:39 mark of overtime as Hanna did a wonderful job of collecting his own rebound at the blue line and spotting Jake Gagnon in the corner.

Gagnon accepted the pass and curled toward the net, snapping a puck into the top corner past Stewart and giving the locals a 4-3 win and a 2-0 lead.

That lead was extended Monday night to 3-0 just over 24 hours later at the Cobourg Community Centre as Wellington was forced to play some come back.

After getting tossed in the early stages of Game 2, the fiery veteran Mac Lowry would beat Dunsmoor early to stake Cobourg to a 1-0 lead.

Ben Woodhouse got his first of the post season at the 13:02 mark to make it 1-1 but the goals kept coming.

Kenny Styles would fire a power play goal to move Cobourg ahead 2-1 at 14:23 but less than a minute later, it was Wellington’s turn to beat Stewart on the mend advantage to make it 2-2 inside the opening 20 minutes of play.

Wellington would get their first lead of Game 3 at 16:20 as Woodhouse set up Dawson Ellis with 3:40 left in the first.

Wellington’s Dylan Massie would score at 4:18 of the second to make it 4-2 Dukes.

Dan Panetta would check in with his first of the series with a nifty unassisted effort just over 90 seconds into the third to make it a 5-2 spread in favour of Wellington.

Lowry bagged his second of the game with under five to go but that was it as Wellington outshot the hosts 39-19.

Wellington looks to close out the Cougars in Game 4 on Thursday in Cobourg. If Game 5 is needed, it will be played on Friday evening at Lehigh Arena.