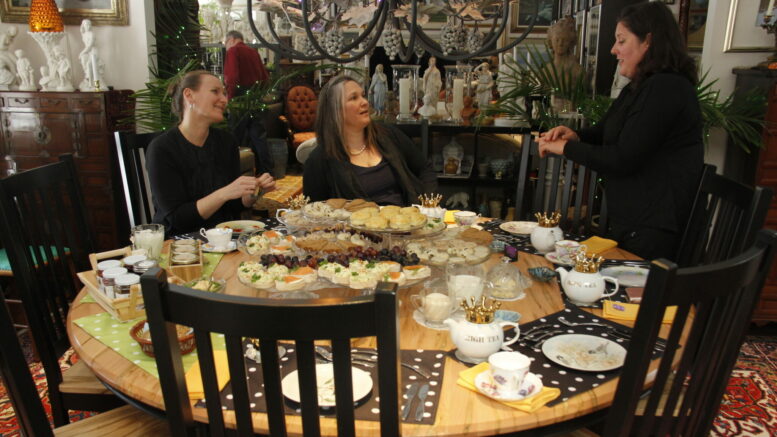 AT YOUR SERVICE (middle) Alison Kelly who organized the group for the tea party sat and conversed with her friends (left) Lindsay Reid and (right) Vanessa Molyneux after choosing their tea cups and tea. (Desirée Decoste/Gazette Staff)

On the beautiful and shady shores of Black River, retirees from the Royal Ontario Museum (ROM) Conrad Biernacki and Brian Musselwhite host the ‘Ultimate High Tea’ experience parties at their Bed and Breakfast on historic Morrison Point Road.

The events, which support Prince Edward County Memorial Hospital Foundation’s Back the Build, offer a table setting for six with a beautiful array of hand painted orphaned plates all painted by different amateur women artists, five different flavours of shortbread, two different kinds of open-faced sandwiches, jellies, jams and honey which all contains or are made with local ingredients.

After selecting your own tea cup, choices are vast with 68 different kinds of tea to choose from.
“The first thing is the plates that we have, they are all different. They were hand painted as a hobby which started shortly after the Philadelphia centennial exhibition in 1876,” Biernecki stated. “It started by chance. I was looking for plates of a certain size to use as dessert plates. You can see these in the antique shops and the thrift stores and when I realized what they were, and there all orphans and all hand painted by amateur women artists. When I look for them I hope they have the artists name, the date and the city on it. The oldest one we have is the one with the forget-me-nots from 1896.”

Starting off in the living room, Musselwhite gave a detailed history of tea, porcelain and anything and everything else to do with tea.

“In about 1841 the rich could afford candles and then could afford the new lighting systems while the poor couldn’t,” Musselwhite said. “It became a level of sophistication being able to stay up later. So the supper meal got later and later in the evening. A friend of Queen Victoria got to the point she couldn’t make it between lunch and supper without something in between so had her service bring her some sandwiches. Once the queen saw it, it really took off. So the big difference is when you get food with it, you can’t put it on a tripod table anymore, so you have to put it on the dinning room table and the dinning room table is higher then the tripod table and hence ‘High Tea’.” 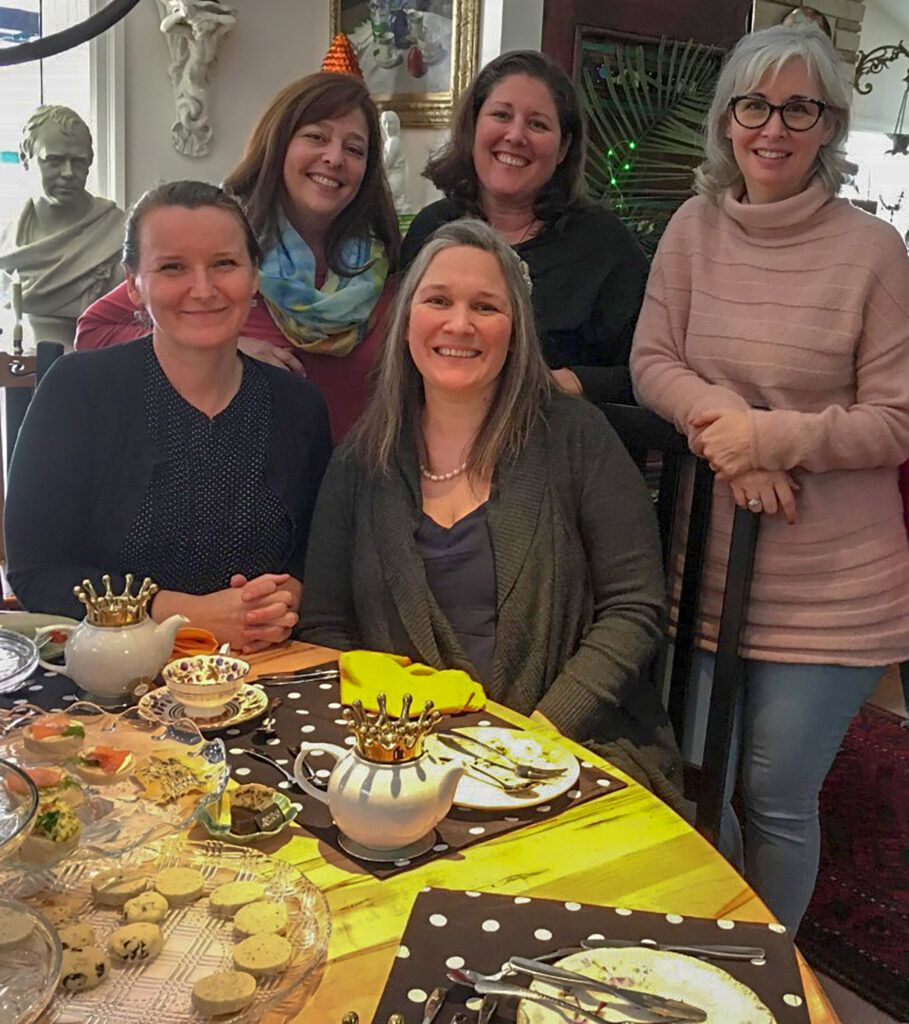 Since the 1700’s the United Kingdom has been a leader in tea consumption and some would believe that’s due in part to the British Empire’s colonization in the far east and lead to tea plant varieties spreading from China to India along trade routes.

“There’s still arguing who domesticated the tea plant,” stated Musselwhite. “But it’s basically china who we got our tea from until the late 18th and early 19th century when the English ran over india.”

The tea plant has many subspecies, some of which can live in some kind of jungle dampness/wetness and other ones are more happier in dry places.

Green tea is the tiny new leaves on top of the plant and black tea is the leaves further down that are bigger and can be oxidized. And now of course different companies have added different flavours and we now have herbal, decaffeinated and stronger teas.

“We tend to think Queen Elizabeth the first as drinking tea, but she never had tea, ShakeSpear never had tea because it wasn’t around during his era. Tea came in much later,” Musselwhite expressed. “For documentary writings we have 1637, John Evelyn the diarist wrote that he had coffee in Oxford with Turkish students so that made sense because they were bringing it in. It was Samuel Pepys in 1660 who wrote in his diary that he had a china drink, so we have to presume that was in fact tea he had.”

Europeans and especially the French gave up tea consumption very quickly as there were other drinks introduced in the late 17th and early 18th century. What other beverages stoked the fancy of Parisians of the day? Coffee, hot chocolate, mixed wine and punch.

“In fact we always look at people from that time period and think ohh they were drinking all this gin, beer and ale and there was a reason for that,” Musselwhite said. “Because they had already polluted all the water so the only way you made sure you never got cholera or anything was drinking ale or beer because that water was pure from where it came from, but the rest of it was polluted, so they had to be very careful.”

Our ancestors never drank fresh tea as it was usually six months to a year old before the ships had returned from the far east.

When tea was first brought to Europe, it was in square wooden boxes and part of the problem was shippers didn’t have any insulator so the tea leaves would pick up traces of glue or absorb the wood taste and, eventually, tea started arriving in ceramic containers.

“In fact Queen Mary, of William and Mary in the late 17th century was so crazy for porcelain she started collecting it when William and herself were in Holland,” said Musselwhite. “And she might have been the first one to be a person for abstract sculpture because she started to collect so much porcelain she couldn’t keep it in her palaces. When she became Queen of England with William they brought it to England and, on a mantle pieces, she started stacking so she would have a bowl and then she would stick a vase in and then another bowl on top of the vase and that created all of these abstract shapes which have never been seen before, but she wanted to show off her porcelain, she was not a minimalist.”

The high tea party ended with a tour of Biernacki and Musselwhite’s beautiful water front bed and breakfast and a reason as to why you might swear at a potter on your drive home.

“Why are you going to be swearing at a potter when your out on the road, especially the county? Because there are so many pot hole,” expressed Musselwhite. “Early potters, from the tudor and Elizabethan period needed good clay so they had to go and dig their own clay and make the piece, decorate it, fire it and then sit it in the market place, and they weren’t making very much money. The new roads that were going through the country side had much better clay so potters would go out at night time and dig a load of it up, and so that’s how we get pot holes.”

High Tea can be served almost any day 2-4 from October-May to groups of 6-8 people. $38 per person plus HST and gratuity. Gift certificates available and those partaking are asked to book a week in advance.

For more information on attending your own High Tea party please email blackriverbb@gmail.com or call 613-476-7346