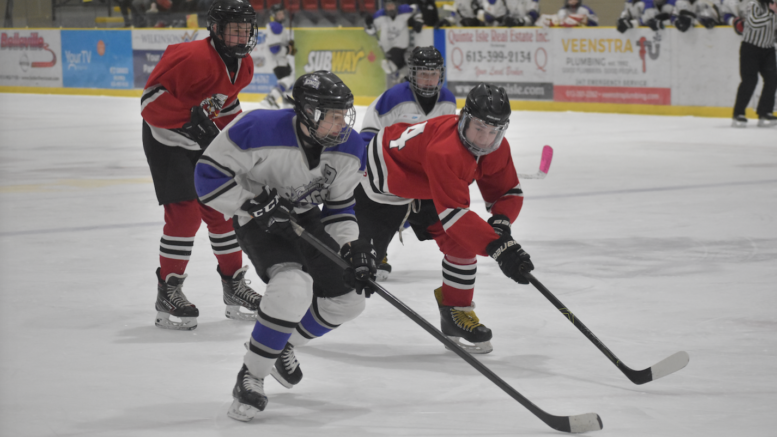 The Lehigh Cement Bantam B Prince Edward County Kings will play for the Ontario title.

After a flair for the dramatic which saw the Kings and the visiting Listowel Cyclones spilt Games 3 and 4 at Lehigh Arena on Friday and Saturday night setting up a winner-take-all Game 5 at the Steve Kerr Memorial Complex Sunday, the locals were able to build a comfortable three goal lead through two periods of play Sunday night en route to a 4-1 win.

The victory puts Prince Edward County into the Ontario Minor Hockey Association B finals against the Ayr Flames who vanquished the Petrolia Oilers in four games.

Details of the All Ontario Finals were being hammered out on Monday and will be announced this week and this will mark the first time since 2015 an Kings squad will play for the OMHA ‘Red Hats’ that signify a successful championship run.

Kings skipper Chris Rice admitted after a pair of tight contests at home, it was nice to get out to lead and have a working margin in the final 15 minutes of the series in Listowel Sunday evening. 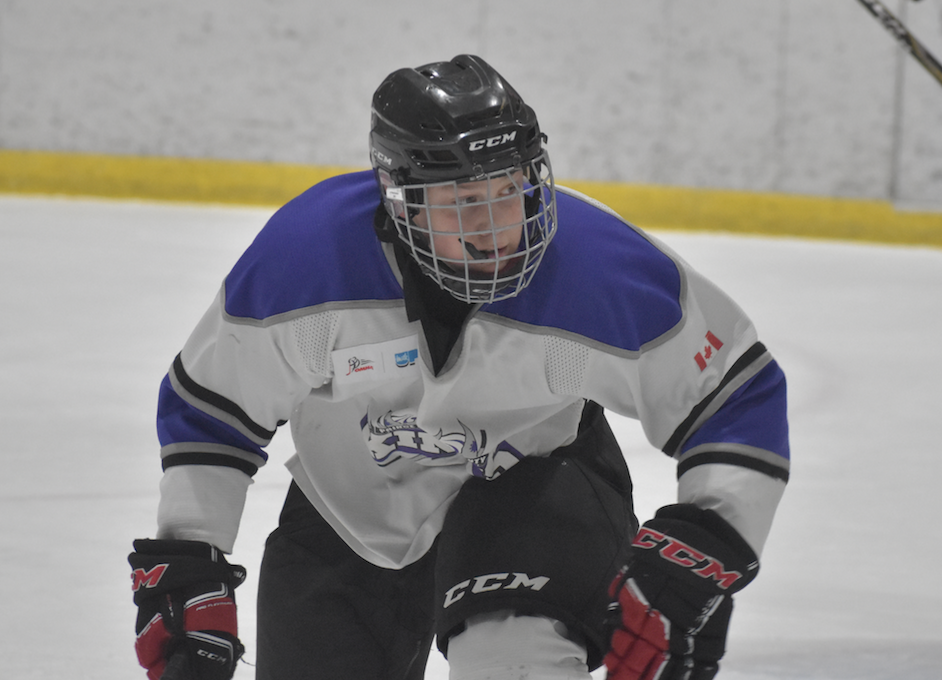 “They put together their best game of the season on Sunday and there was never a better time for it,” Rice told the Gazette Monday. “I think in Game 4 with their backs to the wall on Saturday, Listowel got the jump on us early and we had a sense they were going to come out gunning for us.”

After splitting the first two games in Listowel the previous weekend, the OMHA Semi-Finals stuck to the script this weekend with neither team winning back-to-back games.

On Friday at Lehigh Arena in front of about 500 fans, the Kings looked stuck in neutral for a large portion of the contest.

After a Kings goal was inexplicably washed out in the second period, the Cyclones would break the ice first when Bryan Darou took a Colin Spalding feed in the slot and beat Kings netminder Austin Stock at the 3:11 mark.

Down 1-0 into the third, Stock needed to be sharp as the Kings struggled to find their game.

But, with the locals buzzing in the Listowel end in the final five minutes of play, a Cyclone penalty was in the offing.

With just 1:13 left in the contest and Stock making his way to the bench for an extra attacker, Liam Philip would make a nice pass from the half board to find Riley Grimmon in the high slot.

With a crisp one timer, Grimmon found the glove side corner of the Listowel net to tie the game at 1-1.

The Kings could smell blood in the water in the 10 minute over time period and it didn’t take long to decide a winner.

Reese Kleinstueber would follow up a Ben Smith shot and jam home a loose puck that just crested the Listowel goal line to give the Kings a 2-1 win and a 4-2 lead in the six point series.

Despite the win, the Kings coaching staff felt afterwards the club hadn’t played at its best.

“We really didn’t step up our game until the third period and Austin Stock really held us in,” Rice said.

On Saturday in Game 4, the locals would come with a more complete effort but would have the tables turned on them in the drama department.

For the second straight game the teams would be scoreless through the first and Listowel would score the only goal of the second. 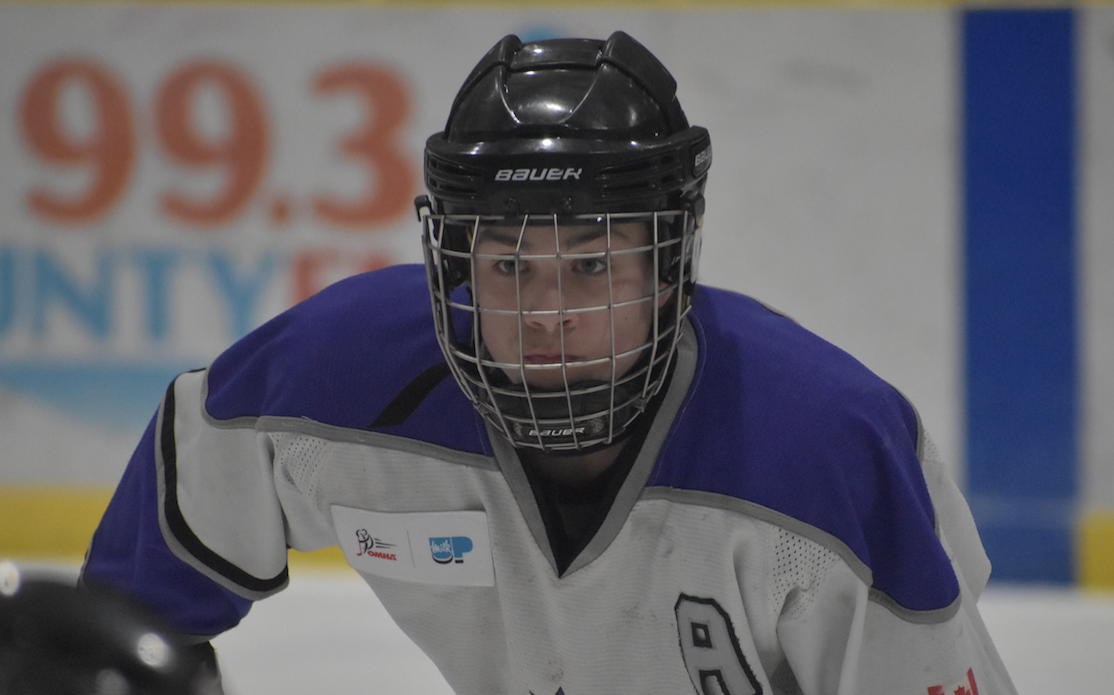 Kings forward Ben Smith had two goals and set up another in a deciding 4-1 win over Listowel on Sunday. (Jason Parks/Gazette Staff)

James Bender’s tally with 94 seconds left in the second stanza had the visiting Cyclones heading to the dressing room with a 1-0 lead.

The Kings didn’t wait until the penultimate minute of the game to tie it as Nathan Steen fired home the game-tying goal with just under five minutes left thanks to help from Riley Grimmon and Mackenzie Moyer.

But, having experienced a crushing defeat a night prior, Listowel wasn’t about to see lighting strike twice and Darou’s quick shot caught Stock flat footed with just 58 seconds left to tie the series at 4-4, setting up Game 5 in Listowel 24 hours later.

The Kings didn’t wait around in Game 5 and it was Smith scoring off a power play rush at the 10:14 mark of the first.

After a Kings goal was disallowed a few minutes later, Prince Edward County would double the led for real when Philip jammed home a loose puck with 5:49 left in the first.

Grimmon added an assist on the play.

The Cyclones’ Jackson Kuepfer solved Stock with just over two minutes left to make it a 2-1 score at the end of 15 minutes played but the visiting Kings were the better club through the first period.

In the second, the Kings kept their foot on the gas as they could taste the OMHA finals.

“We knew we had to put together a complete game and our message was don’t let off the gas and push the pace,” Rice said.

Early in the second, the dogged determination of the Kings would pay off with a goal as Smith found Gerrit Kempers in front at 13:04 to make it 3-1.

Later in the frame the same duo would reciprocate as Kempers found Smith at the net at the 2:25 mark to drive a dagger straight into the heart of the Cyclones.

Rice said moving Smith to the wing paid dividends for the Kings.

“It allowed Ben to relax on his defensive roles and think more offence and it really paid of on Sunday,” Rice added.

The Kings didn’t allow Listowel a sniff in the third in the most buttoned-downed period of hockey the Kings played this season.

“I think they knew what was at stake, we had been burned in that building before and no one wanted to see it happen again,” the coach added, referring to a Game 1 loss that saw the Cyclones come back and beat the Kings in overtime.

The Kings open the 2020 OMHA Bantam B finals at Lehigh Arena on Saturday against the Flames with Game 1. Puck drop is scheduled for 5 p.m.

Game 2 will also be in Wellington, slated for Sunday at 2 p.m.

Fans are encouraged to wear white as a sign of support for their Kings.