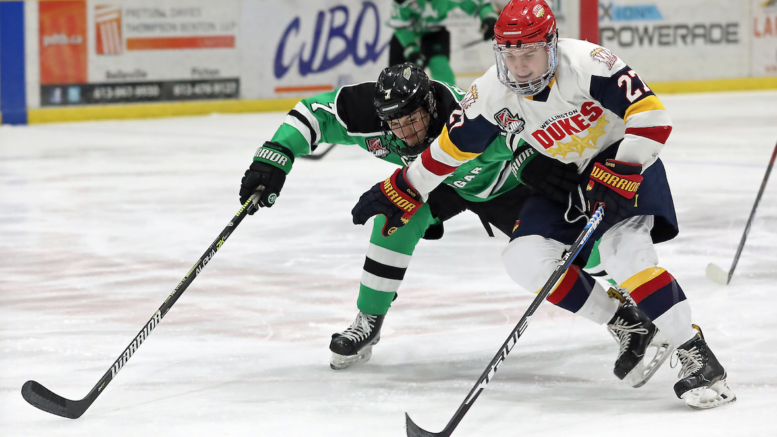 Wellington's Jake Gagnon tries to get around Darren Beattie of the Cobourg Cougars. Gagnon and the Dukes will host the Trenton Golden Hawks in the 2020 East Division finals at Lehigh Arena Friday night. (Ed McPherson/OJHL Images)

With the 2019-20 regular season half over, even the most open minded Ontario Junior Hockey League observer couldn’t have been faulted if they banked on the Wellington Dukes and Trenton Golden Hawks meeting in the second round of the 2020 Buckland Cup playoffs.

The Dukes swept away the Cobourg Cougars Thursday night to move on to the East Division finals while the Golden Hawks advanced with a five game series win over the Whitby Fury Saturday evening, setting up the Best-of-Seven Battle of Quinte that every hockey fan in the region has been anticipating for the last two months or more.

Dukes coach Derek Smith said Sunday his club wasn’t looking past the Cougars but felt there was a showdown between the forever rivals who were ranked one and two in the Southeastern Conference coming at some point in the playoffs.

“It’s going to be a really exciting time for the fans of both teams and I know our group is preparing for the biggest test of the season,” Smith said.

Up 3-0 in the series and poised to sweep, Wellington was outshooting the Cougars heavily at the end 40 minutes in Cobourg on Thursday night but the game was tied at 1-1.

While there were a couple of telling moments in the first three games of the series, the first two minutes of the third period would decide Game 4.

Coburg goalie Dershahn Stewart who was brilliant at times in the series, came to out of his crease to play an errant puck just over a minute into the final stanza and would collide with a forechecking Dan Panetta.

Stewart would get reset in the Cougar net but the puck never left the Cobourg defensive zone.

Eventually, Dawson Ellis would let a snap shot go from well out but the puck would hit a Cougar defenceman on the way to the net and beat Stewart to put Wellington back in front at 2-1.

Under a minute later, defenceman Ben Addison would take the puck along the Cougar blue line and fire a wrist shot between the legs of legs of Cougar Nicholas Aromatario and past Stewart at 1:57 to make it 3-1.

Not that Wellington needed anymore insurance as they completley stifled the Cougars but Panetta would pot an empty netter with just over two minutes to play and then, with Steward returned to the net, Barret Joynt picked off a zone exit pass at the blue line and potted his own rebound at the 1:15 mark to make it a 5-1 final.

Matt Dunsmoor picked up his fourth win of the post season making 24 saves in the process.

Wellington will open the 2020 East Division finals at home on  Lehigh Arena ice on Friday night and then travel to Trenton for Game 2 on for a 6:30 p.m. puck drop at Duncan MacDonald Memorial Gardens.

Game Three sees the action return to Wellington on Wednesday.