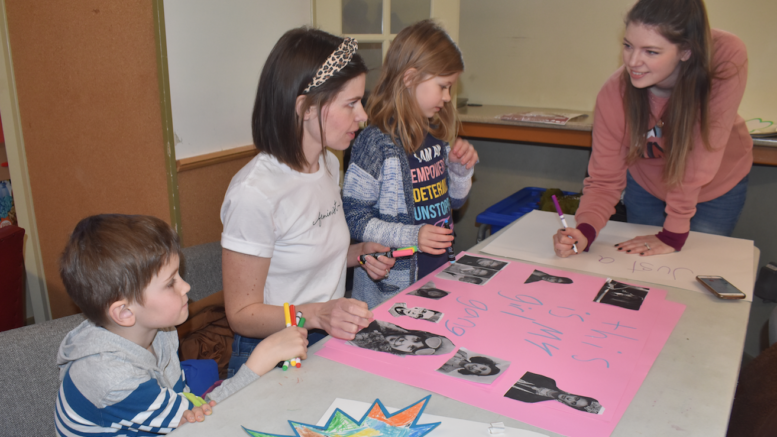 ALL TOGETHER- (From left) Felix, Alicia and Sophie Myderwyk and Rebecca Holloway create posters at the International Women's Day celebrations held at the Picton Library Sunday afternoon. (Jason Parks/Gazette Staff)

A collection of strong and vibrant women of all vintages along with some supportive male collaborators celebrated International Women’s Day (IWD) in Picton on Sunday afternoon.

An inspirational address by a local political leader, sign making and a public show of progress and strength on Main Street were all part of festivities organized by the Picton BIA and hosted at the Picton Branch of the Public Library.

No less than two dozen people took part in IWD which has been celebrated since the first gathering in 1911. The United Nations adopted the day in 1975 and there were several public celebrations in the Quinte area including the one In Picton.

Among those speaking Sunday at the library was Picton councillor Kate MacNaughton.

MacNaughton spoke to her reasons for getting politically active and much of that decision to run in the 2018 municipal election had to do with the fact she didn’t see herself or concerns that she and others supporting her bid being addressed.

Historically, IWD has been about a search for equity so that humanity can achieve great things in a just society and MacNaughton said she draws inspiration from young people who define feminism differently than perhaps she or the ones that came before her do.

“I’m impressed how incredibly self possessive young people are and how they have a different ethos than feminists of the 1990’s and the 1970’s,” MacNaughton said. “This transition throughout the generations has been built on a lot of hard work by a lot of people- a lot of women and a lot of women’s organizations have been striving for and making societal changes.”

MacNaughton observed the political landscape and said progress in politics included building a critical mass as members of a diverse society.

“The more we see all our faces sitting at the table and making decisions, the more we move forward,” She said.

Diverse voices and many perspectives equal firmer ground on which to make decisions. Those decisions are deliberated through more fulsome discussion and which ultimately result in better policies and directions. “That’s why all voices are important. When we don’t see ourselves represented, we don’t see the possibilities for us growing up and we feel like we aren’t taken seriously and that diminishes our confidence which doesn’t make it easy for us to step forward in the public realm,” she added.

In Canada currently, women make up 25 per cent of the elected bodies in the various provinces and territories which MacNaughton said isn’t a bad ratio comparatively or historically but that the level of female representation in the halls of power could be so much better.

The Picton councillor said major political parties are often loath to run a female candidate unless they are in a toss up or at-risk riding.

The past weekend saw the end of US Senator Elizabeth Warren’s bid to be the Democratic nominee in the 2020 Presidential election and MacNaughton admitted with a chuckle that made her “Cranky.”

She said watching Warren step out of the race brought back feelings of the 2016 US Presidential election, the 2017 Ontario Conservative leadership  convention and, most recently with this weekend’s Liberal leadership convention.

“When are are going to get a chance to elect women who are not a risk-women who are smart, qualified, capable, energetic, dogged and impressive. When is a party that is not at the precipice of decline going to bring forward such a candidate?” MacNaughton wondered. “For the leader of the Conservatives we had an opportunity to have Christine Elliot as Premier and we ended up with Doug Ford.”

While Canadians can view big pictures issues such as the ratio of women and men to elected positions, women in developing countries face barriers and gender-biased policies and systems that were eradicated and conquered decades ago in this part of the world and the term ‘International’ in IWD wasn’t lost on MacNaughton

“We can never forget that women in other parts of the world are mired in the struggles that were fought and won a century ago in this part of the world,” she said. “Internalization in Canada is good but so is externalization and supporting other countries as they move beyond things like gender biased education systems or laws that don’t protect girls from childhood marriage. Just because we are here and wearing pants doesn’t mean that we don’t keep moving forward and walking the walk.”

Picton’s Myrna Mather recalled participating in IWD events and feminist marches in the 1960’s and 1970’s in Toronto and said those public displays of dissent started as consciousness raising gatherings where women met together and talked about the conditions that were affecting them.

Mather could recall a time when women weren’t free to move ahead in the life they wanted-weren’t able to choose their preferred employment or take out a bank loan on their own or hold property.

“So there’s been a lot done in Canada and that’s good but there’s so much work to be done internationally and we can never stop bringing attention to this fight,” Mather told the Gazette.

In terms of moving the political dial, Mather said there’s something buried in the DNA that makes some people cast doubt when a woman seeks higher office or upper tiers of business. As a former secondary school principal, Mather referred to a self-defeating attitude that was prevalent among female students. In order to ‘fit in’ and be accepted, it wasn’t uncommon for young girls to shy away from academics or athletics.

“They would be so worried that ‘I won’t be popular if I’m too smart or I’m too good in sports’ and they wind up demeaning themselves to fit in. I’m so glad we have a different generation today that are so much more self assured. It’s really making a difference in society,” Mather said, adding she was heartened to see both men and young boys at Sunday’s gathering that appeared supportive and want to build true partnerships.

Among those in attendance on Sunday was County of Prince Edward CAO Marcia Wallace who is the first female to lead at Shire Hall since Gayle Frost in the mid-2000’s.

“I was really interested to come and participate in this walk and see the diverse interests that gathered at the Library to offer some great viewpoints,” Wallace said. “Personally, I’m trying to figure out equality means in this place and this time and I think that’s what IWD means to me.”

Wallace added she was reflecting on what needs to be done in Prince Edward County to address the issues facing the community and spoke to the importance women and men working together in unison to face and conquer these challenges.

“Since arriving here I’ve been struck by the extreme wealth and the extreme poverty that live side-by-side but also by how, on all sorts of issues, people in this community have come together to try and address it.”