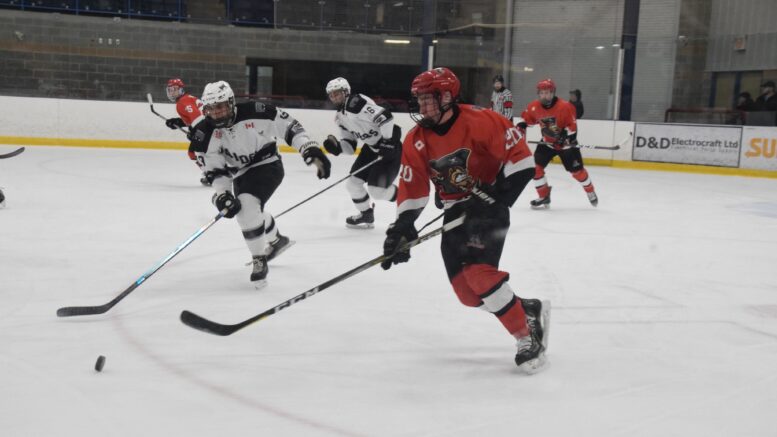 Picton Pirate defenceman Jacob Dietz tries to escape his end while being pursued by Napanee Raider Liam Mroueh. After dropping Game 1 of the Tod Division finals, the Priates and Raiders meet in Game 2 in Picton on Thursday. (Adam Prudhomme/Napanee Beaver)

The Picton Pirates will be looking to hold serve when they welcome the Napanee Raiders to Huff Estates Arena Thursday night for Game 2 of the Provincial Junior Hockey League  Tod Division finals.

The Pirates came up a goal short in Game 1 at the Strathcona Paper Centre on Friday, falling to the host Raiders 2-1.

Picton would emerge from the first having out shot the hosts 11-8 but trailing 1-0.

With just under two minutes left in the period, it would be former Pirate and Napanee native Logan White setting up Evan Foley for the game’s opening goal.

In the second, Picton had a response as blue liner Nick Kyte would feed Nick Kirby Palliser for a equalizer with just 1:04 left in the middle stanza.

Tied at 1-1, Napanee pulled away for good when Cameron Sheehy would set Foley for his second of the game with 9:18 left in the contest.

Picton would send 13 shots at Napanee’s Bailey Maracle but the netminder was flawless after the second period.

In the Pirates net, starter Eric Tessier was almost as sharp, making 31 saves for the locals.

The teams are in action for Game 3 the following night in Napanee.