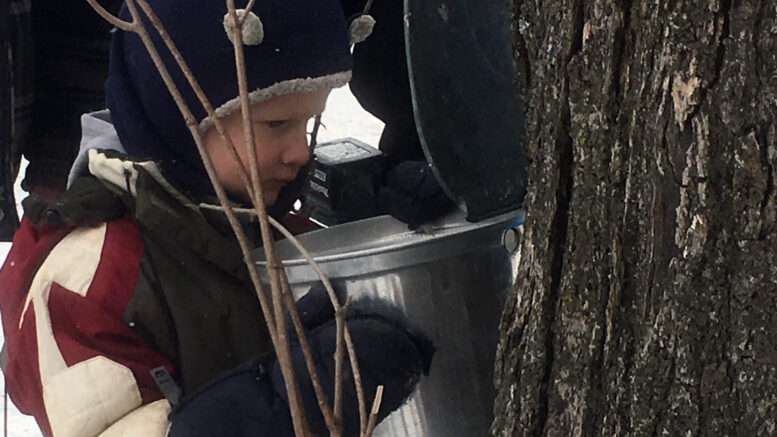 Kicking off the tourist season for the 19th year in a row is Maple in the County. The two day event runs Saturday, March 28th and Sunday, March 29th.

This event offers the opportunity for people to drive throughout the county, visiting the many sugar bushes that dot the landscape and that are currently busy preparing the amber syrup that’s become a hallmark of spring. 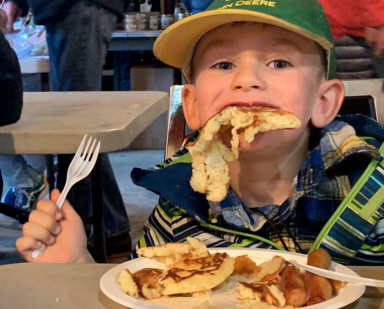 Sweet surrender – Riley O’Brien can’t wait as he jokingly digs into his pancakes at Fosterholm Farms Saturday for the start of 2019 Maple in the County. The County Rd. 18 operation traditionally hosts a well-attended meal featuring a family pancake recipe and unlimited quantities of its own maple syrup. (Adam Bramburger/Gazette file photo)

Speaking to the Gazette in anticipation of this event was Chairperson Ron Hubbs, who spoke from his own sugar bush, Hubbs Sugarbush.

Given the recent spate of warm weather, maple syrup producers have begun collecting and boiling sap in earnest.

Hubbs further explained that regardless of weather this past winter, the syrup being tapped in springtime is actually dependent on weather from the previous summer.

Guests can expect to witness syrup making from the traditional way to the modern way, and in both small and large operations.

Last year, despite inclement weather, the event drew 10,000-12,000 people to Prince Edward County sugar bushes and Hubbs is hopeful this year will be at least as successful.

Maple in the County extends beyond visitors, with stayPEC having joined with local accommodators to ensure visitors have an enjoyable time. Many who come for the maple festivities also avail themselves of the fine dining, shops, art and theatre the county has on offer. Movie night and free skating venues are also provided.

The event is supported by the County of Prince Edward Community Development Department. As well, Sobeys Picton has been sponsoring the event annually.

For detailed information about the participating sugar bushes, activities and events, please visit:https://www.visitpec.ca/maple-in-the-county/