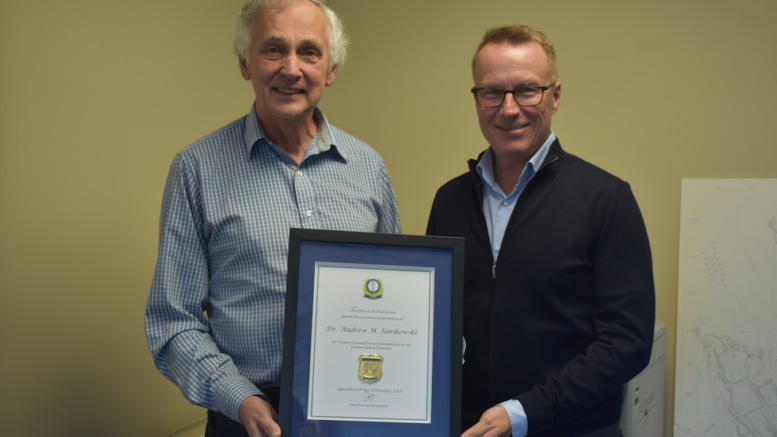 Prince Edward County’s longtime coroner Dr. Andrew Janikowski is set to retire this June after 36 years of service. Before his well deserved retirement, Janikowski visited the Gazette office to offer some insight as to his important role serving the community and his job making sense of death.

Janikowski was joined by the Regional Supervising Coroner, Dr. Paul Dungey. As Dungey pointed out, the medical community is not always the greatest at recognizing the hard work of its own.

“When I took over as regional supervisor, it was really nice to get to know the coroners, such as Dr. Janikowski, who was an anesthesiologist and practised general medicine,” said Dungey. “He has diverse interests and he’s also a very interesting person. He travels broadly, he’s knowledgeable and well read. It’s great to work with him.”

In fact, Janikowki’s career has been diverse in both nature and geography. The soon to be retired coroner has spent time working as far away as Nunavut, Baja, California and the Dominican Republic. He’s also worked for National Geographic, cruise lines and Honda America to name a few.

“We don’t do a good job of that (recognition),” echoed Dungey. “Then, maybe even more so, when you work below the radar as a coroner, you don’t interact with many people.”

Like any good investigative work, Dungey explained, the work of a coroner is focused on answering five questions surrounding death. Those are: who, what, where, when and by what means.

“Largely, we provide those answers to families,” said Dungey.

Whether the death is natural or not, he noted, it’s sometimes difficult to pinpoint its cause. Such deaths must be investigated, along with all deemed non-natural.

“As a society, I think we take good care of our dead in Ontario,” said Dungey. “We have a physician-based death investigation system, which is not consistent across the country.

Despite their best efforts, Janikowski conceded there are some deaths that remain a mystery. In those instances, the coroner must be as transparent as possible and cite the death as “undetermined”. Nonetheless, only about 300 deaths across the province per year fall into this category.

Apart from directly serving the community, part of the job of a coroner is to make recommendations to try and prevent unnecessary deaths in the future.

“We have the ability to make recommendations, have expert committees review things and then have inquests. All those are public safety oriented. The recommendations are primarily to try and prevent further deaths,” Dungey stated.

An example of this would be if repeated fatalities were to occur at a particular intersection, the coroner could then bring that to the attention of the Ministry of Transportation.

There are myriad other examples of changes in society due to the work of coroners. These include barriers on the 401, graduated licensing and, most recently, the move to limit isolation in prison.

While recommendations made by coroners are not binding, they do carry the weight of the Office of the Chief Coroner.

During Janikowski’s career, he was responsible for two inquests. One of those resulted in the Canadian Government enacting safe gun storage legislation.

Despite moments of achievement, there are still moments where the coroner, often a family physician in the area, has to prepare themselves to face death within their community.

“It’s always a challenge,”Janikowski said. “You try to get as much information from the attending police at the scene. But you never really know until you get there because it’s a combination of the scene and the family’s grieving process. After you’ve done a number of cases, you sort of steel yourself.”

When asked whether there were cases that had left a mark on him, Janikowski replied that those concerning children were hard to forget.

“There are some where you’re left emotionally vulnerable, especially those involving kids. That’s the tough one. Most of the cases are understandable, but some are not. Things shouldn’t be happening to kids, and that is hard-especially as a father,” he said.

During his time as coroner, the local coroner has seen a shift in the cause of non-natural deaths. He happily reported there are far fewer drunk-driving related deaths. Unfortunately, the death rate from opioid use has more than made up for that decrease.

“One of the good changes is we don’t have as many drunken driving deaths anymore. I think people now are looking more toward designated drivers. Alcohol isn’t as much of the picture, but drugs have more than made up for it,” he said.

Despite the different ways in which a coroner and family physician may interact with the public, Janikowksi is adamant there is an overlap.

“As a doctor, you look after people. You have skills and knowledge about medicine. As a coroner, you’re applying that knowledge to answer the five questions, especially the question of “why” to make sure the death is understandable, or if it isn’t, then why not,” he said.

When asked why he entered the field, Janikowski replied it was out of a sense of adventure and to try something new, leaving little doubt that the long-time coroner’s next adventure is just around the corner.