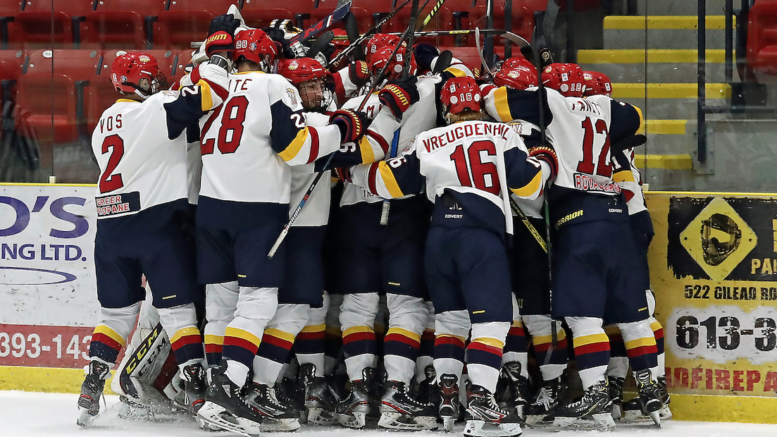 Scenes like this Game 3 Overtime celebration on March 1 have been common place at Lehigh Arena over the past few springs. (Ed McPherson/OJHL Images)

The championship dreams of the Wellington Dukes have been dashed.

The Dukes, along with hundreds of amateur teams from all age levels in Canada still vying for provincial and national titles, have only the question of ‘What might have been?’ to ponder over the coming months as a Hockey Canada decision to end the 2019-20 season as a result of the Coronavirus pandemic has extinguished Wellington’s Buckland and Dudley Hewitt Cup aspirations.

Clearly, in light of the unheralded and terrifying situation Canadians and citizens of the globe are facing in these hours, Hockey Canada made the absolute right decision to cancel all hockey forthwith Thursday.

Wellington Dukes General Manager Todd Reid admitted to the Gazette Monday the fact that the club’s season is over still hasn’t completely registered.

The same can be said for the players who left the ice in Cobourg March 5 after sweeping the Cougars in Game 4 and spent last week preparing for a second round showdown against the arch rival Trenton Golden Hawks.

For many-fans included- it still seems like the Dukes are still awaiting a second round opponent.

Reid said the bulletin from Hockey Canada used the term suspension and he and head coach Derek Smith assumed the post season might continue at some point later this spring.

The GM sent his out of town players back to their home communities to await further instruction on when practice would resume for either a shortened three game series or even a tournament.

Heck, Reid even wondered if Wellington and Trenton might collaborate in hosting such a Buckland Cup play down tourney  in a few weeks when this current situation might cease.

But by Friday afternoon, it was made clear the final buzzer had sounded on Hockey Canada sanctioned games.

Without bookings, the County of Prince Edward pulled the plug on the ice plants in both arenas that afternoon.

“It’s been a difficult few days. We were somewhat optimistic Thursday night but once you start to watch what’s happening all over the world, it just wasn’t safe for us to continue and I’m thankful that Hockey Canada made the decision they did,” Reid said. “It was the only option that ensures the safety of our players and our fans which what the Wellington Dukes organization has always been about.”

The team has already been through an emotional ringer with the loss of their captain Ben Evans who suffered crushed vertebrae in his neck during the regular season.

Evans was actually scheduled to appear at Friday’s Game 1 against Trenton to give the players a lift heading into the second round.

Reid said the club hoped to have exit meetings at some point with the players when it was safe to do so and that he and his staff including Smith, Rob Ridgely and Don Cotton would spend the next few weeks working with the graduating 20-year-old players still looking for NCAA commitments for next season.

The Buckland Cup playoffs have netted many a Wellington graduate an NCAA Division I or III scholarship.

“You don’t have to look back very far to Elijah Gonsalves last season. (Rochester Institute of Technology) was here watching Andrew Rinaldi and Elijah caught their eye and he ended up with a spot on the Tigers roster,” Reid said. “The Buckland Cup playoffs are a great proving ground and the NCAA scouts are always watching the teams that go deep.”

A lost opportunity for players and you don’t have to let the imagination run too far when supposing how disappointed Wellington and Trenton ownership is after what was sure to be a lengthy series with over 1,000 fans in the stands each night has stopped before it even got started.

While it’s foolish to value dollars over lives at this or any stage, it can at least be acknowledged the loss of a Battle of Quinte between the first and second seeded teams in the East Division has significant financial implications to both clubs.

“I know our owner Ken Clement is extremely passionate about putting a great product on the ice and makes sacrifices to honour that commitment to the village of Wellington and the great hockey fans in Prince Edward County. I really feel bad for both sides that aren’t going to realize the financial benefits of what was going to be a great series. As a fan of hockey, I was really looking forward to it,” Reid added.

Overall, Wellington was the best team in the Ontario Junior Hockey League this season. Their combined record of 47-9-2 tops everyone else and their capturing of the 2019-20 Brant Snow Memorial Trophy emblematic of the top overall team in the regular season is the only piece of hardware that will be handed out to a Jr. A club in this part of the province.

A special group indeed and Reid thanked Clement for being supportive and the staff for producing the results on the ice.

“Ken provides the resources and (Smith) along with Sean Turner and Brandon Harker are allowed to coach and develop these players but it starts in the summer time with guys like (Ridgley and Cotton) doing their jobs and finding the right players that want to be Wellington Dukes in the first place,” Reid said. “We were all looking forward to enjoying the ride.”