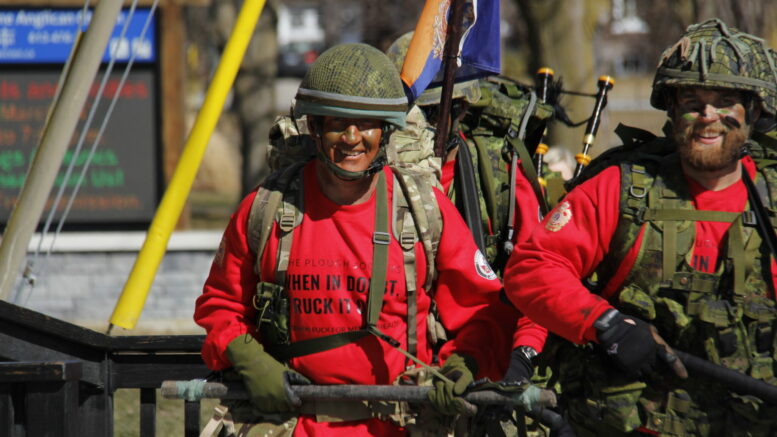 THE PLOUGHJOCKEYS COME HOME- (From Left) Chief Warrant Officer Dean Stokes and Corporal Chad Wilson lead a ruck along Main St. on Thursday. Members of the Hastings & Prince Edward Regiment walked from Cobourg to the ancestral home of the Hasty P's in honour of the regiment's centennial celebrations. (Desirée Decoste/Gazette Staff)

What goes around comes around, as was the case for several members of the Hastings & Prince Edward Regiment (Hasty P’s) when they walked 100 kilometres from Cobourg to Picton, the regiment’s ancestral homeland. Corporal Chad Wilson ‘freshens up’ prior to making the last leg of a ruck from Cobourg to Shire Hall in Picton. (Desirée Decoste/Gazette Staff)

The walk-commonly known as a “ruck”- was not only an act of poetic repatriation, but also an effort to raise funds for Wounded Warriors Canada (WWC). This foundation raises funds to provide mental health programs for ill and injured veterans, first responders and their families.

Despite the early spring chill, and having walked through sub-zero temperatures all night, the Hasty P’s seemed to be in good spirits as they marched to the fire station in Picton on McSteven Drive. Their ruck from Cobourg had begun at 12 o’clock the previous day.

Private Dave Kervin described a night full of camaraderie and team morale that was nonetheless punctuated with individual challenges and stoicism.

“We conversed along the way, just keeping each other’s morale up, keeping supportive, checking on one another and making sure we’re okay,” said Pte. Kervin. “Personally, we each went through stages throughout the ruck defined by our own thoughts. Sometimes, it’s just one step at a time, and that’s what it takes to get through those challenging miles.”

Most of the soldiers offered relief for each other throughout the night, sometimes taking turns riding in an accompanying vehicle. Pte. Kervin noted MCpl Francis was the only one of the team to keep walking all night.

“Master Corporal Sean Francis was the ultimate warrior who did the entire 100 kilometres wherein three of us swapped in and out managing our ailments, making sure we weren’t shutting down or breaking ourselves,” The team stopped in towns and villages along the way, visiting legions, police stations and fire halls.

Kervin is careful to point out that while the team decided to ruck in part to raise funds for WWC, the move is also a bit of a celebration. 100 years ago to the day, on March 12, 1920, the Hastings & Prince Edward Regiment was formed.

“Today is the 100th anniversary of our regiment,” said Pte. Kervin. “So, tonight is our change of command parade. That will be a great ceremony and also a bit of a celebration afterwards. I think the majority of us will probably have a good long sleep tomorrow.”

When asked what the greatest obstacle during the ruck was, Kervin noted the combination of mental and physical stresses could be challenging.

“That’s where the team morale comes in and the team support comes in. You see your buddy continue and you want to continue with him,” he said.

After arriving at the fire station, the team was escorted via fire truck to the former Picton Legion, presently the CAPE, where they again started walking to the tune of bagpipes until they reached Shire Hall.

Congregating on the steps were several County dignitaries, including Mayor Steve Ferguson and Councillor Janice Maynard.

Lieutenant Colonal Steven Boychyn, who is also the Health Services Coordinator with WWC, spoke briefly to the crowd.

“I want to congratulate you on such an achievement,” enthused Boychyn. “It is through the generosity, activities and the raising of funds to help the first responders, our veterans, and active personnel, that we’re able to offer mental health programs for the first responders, all uniform service and their families.”

“There’s a lot of history and professionalism the Hasty P’s have shown throughout the wars, especially during World War II, where we were the most decorated regiment in Canada,” noted Stokes, congratulating his teammates.

“We wanted to do this as warriors and we’ve all finished as wounded warriors,” he quipped.