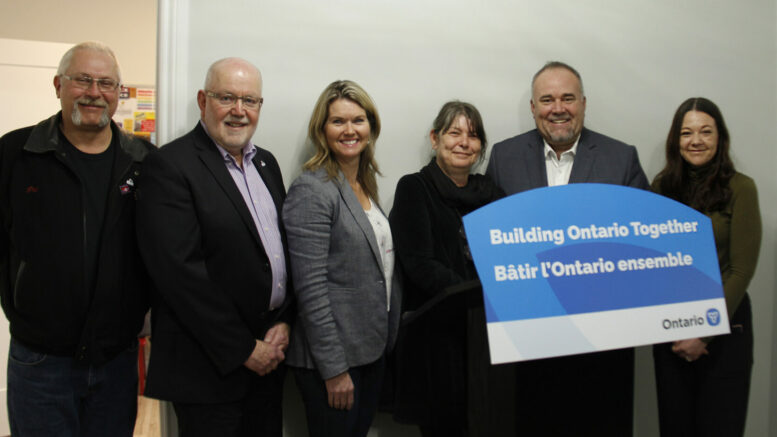 Alternatives for Women (AFW) has received financial backing to the tune of $227,000 from the provincial government to get past their final financial hurdle before opening the new women’s shelter, Vi’s House.

The project began just over a year ago, in February 2019. After a loss of funding this past summer, AFW has received substantial community, and now, provincial support.

Morgan described the funding as both a “relief” and “crucial” citing the need for the funding to improve security around the property in order to protect those in their care.

“It’s all coming together,” said Morgan. “This last phase is really important because it includes the security. It’s crucial in making sure we provide a safe home for these women.”

Furthermore, stated Morgan, the facility will be able to offer expanded programming, shared counselling space with community partners, and security for the high risk women and staff that will occupy Vi’s House.

Smith described the funding for Vi’s House as being something he immediately wanted to do after receiving a compelling pitch form board members.

“As soon as I saw it, I knew that was something I wanted to do. Unfortunately, the need is here in the community and from what I’ve heard many women fleeing violence refuse to leave a dangerous situation in their home because they would have to leave the community. We should have this type of facility in our community,” expressed Smith.

Without the current shelter underway, local women who experience domestic violence must go to Belleville or Kingston to find respite.

Associate Minister Dunlop reiterated the value and need for rural community organizations, such as AFW.

“Community organizations in rural areas play a particularly key role in strengthening communities by delivering essential services to Ontarians who need specialized care and assistance. That’s why, as part of the Partner Facility Renewal Program we are investing $1.7 million to help rural organizations that support women w ho are victims of violence, so they can continue providing important services to women and children,” said Dunlop.

AFW is just one of 380 recipients across Ontario who have benefited from the $11.5 million financial infusion. Other recipients include children’s aid societies, youth centres and children’s treatment centres.

When asked what other initiatives the provincial government has undertaken to combat violence against women, Dunlop pointed to the recent announcement of funds to combat human trafficking. This is the largest financial investment of its kind across North America.

“We announced $307 million over five years. That’s in addition to the announcement in November of $20 million per year of annualized funding for violence against women centres and human trafficking organizations that are on the ground doing work,” she said.

Dunlop explained this announcement was made after consultation with front line workers, survivors of human trafficking and emergency service workers. She also described the need for educating the public to be “eyes on the ground”.

“We know support for survivors is key. Educating the public is important as well. We can’t combat this alone-we need eyes on the ground. It’s very exciting to see organizations like the hotel/motel associations training their front line workers and truck drivers against trafficking,” Dunlop enthused.

Two thirds of the human trafficking cases across Canada are in Ontario, she added.

Despite the relief felt by such funding, and evident need for capital in order to complete the dream that is Vi’s House, Smith spoke to the bittersweet nature of needing such a facility within the community.

“While these announcements often bring an air of excitement, I know there is somewhat of a bittersweet feeling today. For over 30 years, AFW has worked to reduce the need for its services and hoped to make them redundant. That clearly hasn’t happened,” said Smith.

Smith noted that with over 250 women who use the services of AFW per year, whether for counselling or shelter, their facility is far from redundant.

“About 20 women per year find safe shelter as they transition to better situations. Nearly twice that many refuse to go to emergency shelters because that means leaving the community, loved ones and support networks. Just like the people you serve rely on the services you provide, AFW relies on being able to provide help in a physical space that’s accessible and in good condition. You have a vision to offer just that by creating the county’s first local emergency shelter,” said Smith.

Vi’s House has been made possible by momentous community support, such as the Courtney family, who sold the property to AFW at below market value, The Parrott Foundation and also community organizations that have offered support both financial and otherwise.

Speaking on behalf of Mayor Steve Ferguson, who was busy at an emergency COVID-19 meeting, was South Marysburgh Councillor John Hirsch.

Hirsch commended the hard work of AFW while noting the positivity to be found at Vi’s House. He also echoed Smith’s comments with regards to the unfortunate need for such a facility within the community.

“This building, with such a cheery disposition to it, will be so important to the psychology as well as the physical shelter of those women requiring to use it,”Hirsch commented.

When asked when Vi’s House would be open for shelter, Morgan stated their contractor hopes to have the final renovations completed by May, weather willing.

Currently, they are accepting women for counselling and have made an affordable apartment available in the basement. They also offer a crisis line, transitional help, transportation and soon, housing.

For more information on AFW as well as Vi’s House, please visit: alternativesforwomen.org.