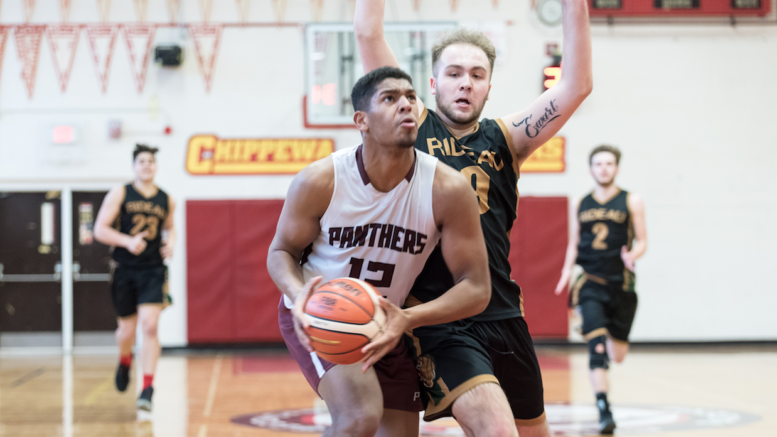 MAKING MOVES PECI’s Alex Arsenault makes a move to the Rideau District High School basket during the Panthers’ Game 2 win over the Lions at the 2020 OFSAA A Basketball tournament in North Bay. (Submitted photo)

The previous high water mark for PECI Panthers Boys Basketball program was exceeded last week as the club made the playoff round of the Ontario Federation of School Athletic Association (OFSAA) A tournament in North Bay, ON.

The Panthers would wind up bowing out of the OFSAA quarter finals against the top seeded and eventual champion Timmins High and Vocational School Lions but what a wild and wonderful journey for the Cats in 2019-20.

Making their second consecutive such appearance at an Ontario championship tournament, PECI Panthers coach Rob Garden said with five players who competed at OFSAA last season, the attitude and confidence level in 2020 was very different and it started at the first team practice when the Panthers arrived in North Bay.

“The boys were upbeat and aggressive and it was arguably our best practice of the season,” Garden said. “It continued during the team photos and banquet when instead of being timid and afraid, our boys were seeking out their possible opponents to try and size them up.”

PECI entered the tournament as the #8 seed, first time in boys or girls basketball history the school has been bestowed such an honour inside the top ten.

In their first game of the tournament, PECI would draw the Atikoken High School Voyageurs from the small town between Thunder Bay and Fort Frances, ON.

Afforded an opportunity to pre-scout the 14th seeded Voyageurs through game film prior to leaving for the Gateway to the North, Garden and the Panthers knew going in that if PECI pushed the pace and tempo, their athleticism would be too much for Atikoken to handle.

“Devon Wilton and Ross Maycock did a great job pushing the tempo, and the Voyageurs did not have an answer for the physicality that we brought on defence,” Garden said.

Atikoken were 10-0 in their North Western Ontario Secondary School Athletic Association season coming into the tournament, but PECI handed the Vees their first defeat 63 – 31.

Most impressive was PECI’s free throw shooting as the Cats went 14 – 16 from the charity stripe.

Alex Arsenault led the way with 24 points while Logan Stark dropped a dime on the Vees in the run away win.

In Game 2, PECI would battle the Rideau District High School Lions from Elgin, ON which is Northeast of Kingston.

Once again, Garden and the squad wanted to see what the Panthers would be facing.

“We had a chance to go and watch Rideau play and they were a good team.  They had good team size, they had a couple players that could really shoot, and they played a pesky zone, which we have struggled against all year.

PECI concocted a defensive game plan to shut down the top RDHS shooter who scored 34 points against Aldershot High School the previous day.

“Arsenault, Stark and Cooper Rogers did a great job all game and held him to only 8 points,” Garden said. 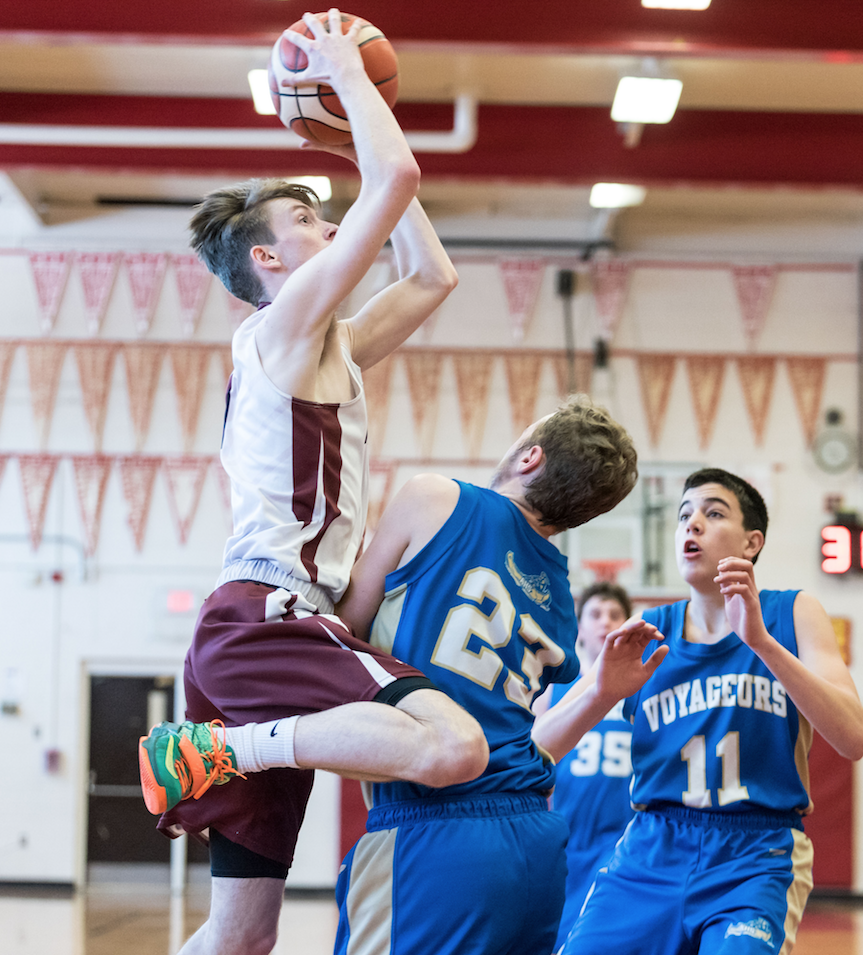 UP AND OUT PECI Panther Devon Wilton drives to the basket over an Aitkoken High School Voyageur during Game 1 of the OFSAA A Basketball tournament in North Bay last week.(Submitted Photo)

But PECI struggled offensively in the first half and the coach said the game was shades of the COSSA final against Nicholson where the Panther defense was excellent, but the shots just weren’t dropping.

Finally, things started to turn around for PECI at the end of the first half.

“We controlled the tempo for last shot and Cameron Pero hit a big three-pointer as the buzzer sounded to give us a 24 – 23 lead at the half,” Garden said.

Similar to the 2020 COSSA final game, Garden remained stoic in the locker room and instead asked a few pointed questions and let the players lead each other.

“We were more patient on offense, guys started to attack the zone which opened up our shooters, and the shots started to fall,” the coach said.

After Pero’s trey which was the lone attempt to fall from beyond the arc in the first half, PECI would explode for eight three pointers in the second half.  Rideau was bewildered and, combined with PECI’s always good defense, the Panthers won the game 53 – 38.

Arsenault again led the way offensively with 20, but Wilton played like a true 5th-year player with his club’s fate on the line, scoring 10 points in the third quarter to finish with a dozen over all.

With the win PECI achieved more school history becoming the first team to win two straight games at OFSAA and move into the Elite 8 at the tournament and, for the second straight year at OFSAA, found themselves in a win-or-go-home game vs the top seed.

“We knew that it would take a perfect game to beat them, and unfortunately, we ran out of gas,” Garden said. “Full credit to Timmins.  They were big, strong, athletic, smart and well-coached.  They were one of the best teams I’ve ever coached against and we didn’t have the firepower to match.”

PECI battled hard for four quarters but just couldn’t get the ball to drop, loosing 55-18.

Forced to start hoisting three point attempts to get back into the game, the Panthers would go a dismal 2-for-17 from downtown and that ratio was ultimately the club’s downfall.

Overall, there was no denying PECI’s pluck and prowess this season as the club went 21-4 with a Central Ontario championship and an Elite 8 finish at OFSAA.

“Not only is this arguably one of the most successful teams to ever put on a Panthers jersey, but they were so fun to coach.  They worked hard, pushed each other, supported each other and loved to play the game,” Garden said.

Now serving the Hastings and Prince Edward District School Board in a different capacity at the Education Centre in Belleville, the former PECI teacher said it might be time step back and let someone else work the practice whistle.

“It’s bittersweet for me that this might end up being my last Panther’s basketball coaching experience, but over the 12 years that I’ve had the pleasure to coach with Ernie MacMillan, the 90+ tournaments we competed in all over the province, the 600+ games, the three Bay of Quinte Championships, the five COSSA Championships, and the four OFSAA appearances, I will remember this tournament for all the right reasons for a very long time,” the coach added. 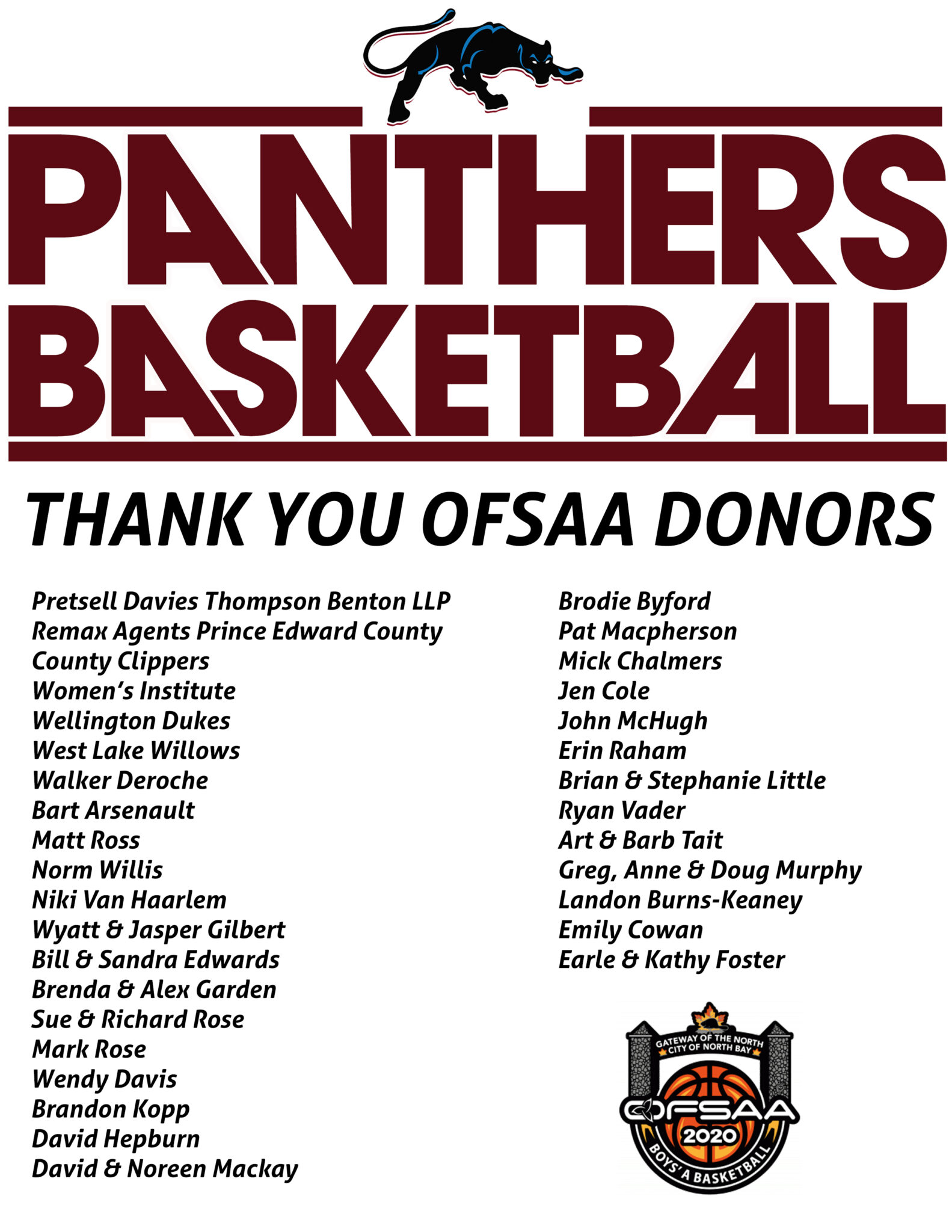