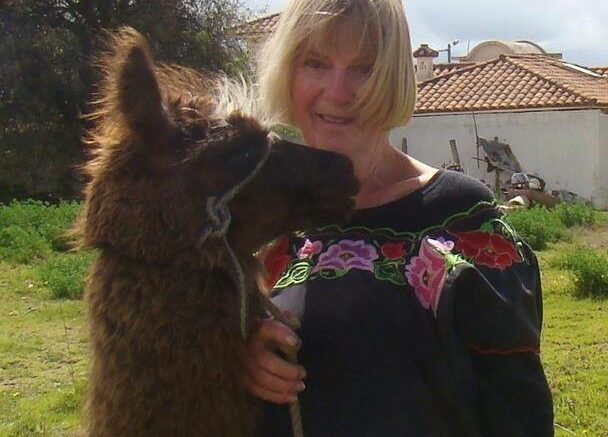 SUNNIER CLIMES - Linda Swaine, pictured here with one of her Llamas in Ecuador, was trapped aboard a cruise ship for several days due to the Coronavirus. (Submitted Photo)

Prime Minister Justin Trudeau’s recent urging for all Canadians to “come home” has, for some, been lost in translation. Linda Swaine, who lived in Picton and operated Rosehaven Yarn Shop for many years, is one such individual.

For the past six years, Swaine has been living in sunny Ecuador, deeply ensconced in local life and regularly sharing pictures of convivial dinner parties, new friends, and exotic vistas via social media.

Unfortunately for the retiree, her life in Ecuador was interrupted when her cruise ship, Sea Spirit, was stranded at sea due to the Coronavirus.

The Russian liner had embarked on a 21 day expedition cruise to Antarctica, the South Georgia Islands and the Falkland Islands. They departed from Ushuaia, at the bottom of Argentina. Unlike those that disembark at every seaside-tourist port, this expedition cruise was one of solitude and exploration.

Most aboard were Israeli, Americans, Germans and New Zealanders, Swaine noted. Given this, news of Canada was of little importance to those aboard, and furthermore, hard to come by.

“Our cruise was quite isolated. In the mornings, in the library, we did receive a little international newsletter that tracked the virus, but had much more world news from places like the U.S., India etc,” noted Swaine.

Even when the Coronavirus had spread to pandemic proportions, those aboard were mostly learning of events in places like China and Italy.

“Nothing (was reported) on Canada and very little on South America-from where all passengers would eventually board planes to their home countries,” expressed Swaine.

Still, it wasn’t until the Sea Spirit was denied entry to the port at Montevideo, Uruguay that Swaine and her fellow passengers realized the gravity of the situation.

Until then, she remarked “changes still seemed possible.”

Despite her hope for disembarking in Uruguay, Swaine knew by last week that she would not be returning to her sunny home in Ecuador. The country had closed all borders, even to citizens.

For Swaine, who is still a Canadian citizen, her sights were set on repatriating to Picton as soon as she could reach shore.

That would prove to be a task fettered with obstacles. Her ship spent days in the purgatory as Swaine would come to know as the Rio Plata-a river that runs between Uruguay and Arentina, neither country willing to accept the stranded cruise ship.

She described strict compliance to health checks onboard the ship. All passenger’s had their temperatures checked in Ushuaia, with only those who passed a questionnaire and health check allowed to board.

When it seemed possible the ship might be able to dock in Argentina, Swaine explained the passengers were subject to temperature checks twice per day. However, she also stated there was no known testing for the virus on board.

As for Trudeau’s sweeping, paternalistic call for all Canadians to “return home” Swaine stated that news simply did not reach her. All the passengers heard about Canada was that the Prime Minister’s wife had contracted the virus.

Meanwhile, Swaine beseeched friends back in in Canada, especially Picton, to help. Unable to access credit and having her funds tied up in this country proved to be an especially worrisome factor.

With limited, costly internet and no clear indication of when she would be on solid ground once more, searching for a flight home became an impossible task.

“A few of us wanted to check flights but that was almost impossible with the costly $20 US for 30 minutes options and very slow speed,” she said.

When asked whether or not she was able to avail herself of the purported $5,000 loan offered by the federal government to Canadians stuck abroad, Swaine replied “what $5,000?”

“All I have read is that there is a loan and when you are where I am… not useful. No contact, no details from Government,” she asserted.

After days stranded at sea, Swaine’s cruise ship was allowed to disembark at Montevideo. From the ship, passengers who were not immediately flying out of the country were sent to be quarantined in hotel rooms, with food delivered to their doors.

From there, Swaine was able to secure a Delta flight from Montevideo, Uruguay to Sao Paulo, Brazil. From Brazil, she flew to Kennedy Airport in New York before catching a flight to Toronto.

On March 21, Swaine arrived safely in Canada and immediately began self-isolating in Picton.