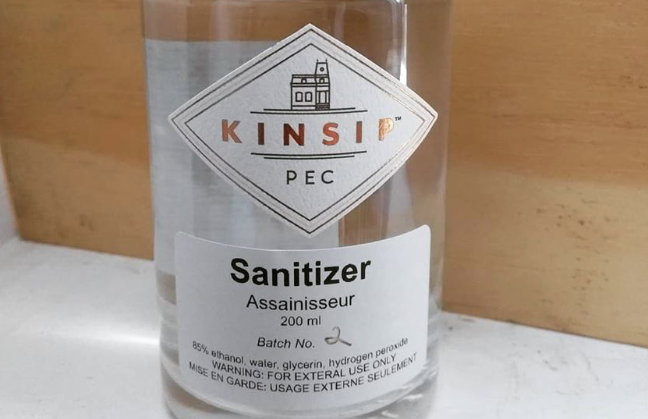 ALL IN THIS TOGETHER- Picton area distillery Kinsip has changed their production model for the time being to produce hand sanitizer. (Kinsip photo)

Early last week it became obvious to the owners of Kinsip House of Fine Spirits there would be a great need for hand sanitizer in our community as the COVID-19 pandemic ramped up.

Maria Hristova, one of the owners of Kinsip and head of retail spoke to The Gazette about the importance of making hand sanitizer.

“Due to the nature of what we do which is producing delicious spirits, we have a lot of alcohol and we decided we needed to do the necessary things to switch our production to hand sanitizer,” expressed Hristova. “We know there is going to be a world-wide shortage in the near future so we are doing our part to help our community hopefully flatten that curve.”

The difference from making fine spirits and switching to hand sanitizer is the glycerine and hydrogen peroxide, which Kinsip normally doesn’t carry for their regular production.

“We’ve had to source some ingredients like glycerine and hydrogen peroxyde which we don’t usually have in our regular production,” Hristova said. “We’re also working under a lot of time pressure and trying to produce as quickly as we can. Usually in the past, if we have ran out of one of our whiskies,

some customers might be upset but right now running out of sanitizer feels a lot more important.”

“We’re giving out one bottle of free hand sanitizer for every frontline worker who emails us and lets us know that they need it,” stated Hristova. “We will be producing more in the very near future so we can start selling to the public as well as organizations who are facing the shortages. Social Media is the best way to keep up with us as we will be announce all new developments in our production there.”

If you are a frontline worker and need hand sanitizer please email Kinsip at info@kinsip.ca and they will arrange for you to pick up your free one.