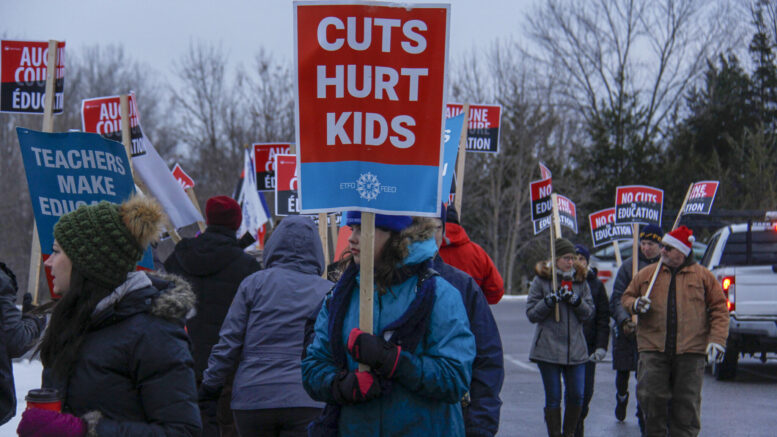 CUTS NO MORE Pictured here is a joint teachers strike back in November 2019 at Todd Smiths office on HWY 62. Luckily, for now, no more strike is needed as the Ontario Public School Boards' Association (OPSBA)/Council of Trustees’ Associations (CTA) and the provincial government have quietly but finally reached a successfully tentative agreement with the Elementary Teachers' Federation of Ontario (ETFO). (Desirée Decoste/Gazette Staff)

Amid the backdrop of the COVID-19 Pandemic and a three week (at least) public school closure, tentative labour peace between the Elementary Teachers Federation (ETFO) and the Ministry of Education has been realized.

Late Friday it was announced by the province that central negotiations between ETFO and the province had been successful, ending an unprecedented, months-long labour actions and rotating service withdrawals.

Details of the tentative settlement were not disclosed as the pact will require ratification amongst ETFO members.

“Despite the many challenges caused by the current pandemic situation, all of the parties continued to work towards reaching a deal that will help bring some stability to our system during what is obviously an unprecedented and rapidly evolving situation,” said Ontario Public School Board Association President Cathy Abraham. “Teachers and education workers will be an important part of guiding our students through the challenging time ahead. This agreement is a recognition that we value the contribution they make to the educational experience of our students every day. We look forward to working together to ensure that we are able to provide an educational experience that is focused on the success and well-being of our students.”

“Our Government is pleased to announce a tentative agreement has been reached between the Crown, ETFO teachers and education workers, and the school boards trustees’ associations. This tentative ETFO agreement builds further momentum for deals and progress that students deserve, following last week’s tentative agreement signed with the Ontario English Catholic Teachers’ Association (OECTA). We remain focused on landing further deals, to provide stability and certainty to students, parents, and educators.”

“This has been a very prolonged and difficult bargaining process,” said ETFO President Sam Hammond. “We are very grateful for the support and unwavering solidarity of our members, and the public who have continued to stand up for public education and the supports that our students and educators need now and in the future.”

President Hammond added that “while ETFO’s Provincial Executive has endorsed the terms of these tentative central agreements, the decision to accept them ultimately rests with ETFO’s 83,000 members.”

For the education workers component of this negotiation, the CTA is a partnership between OPSBA and the Ontario Catholic School Trustees’ Association (OCSTA).