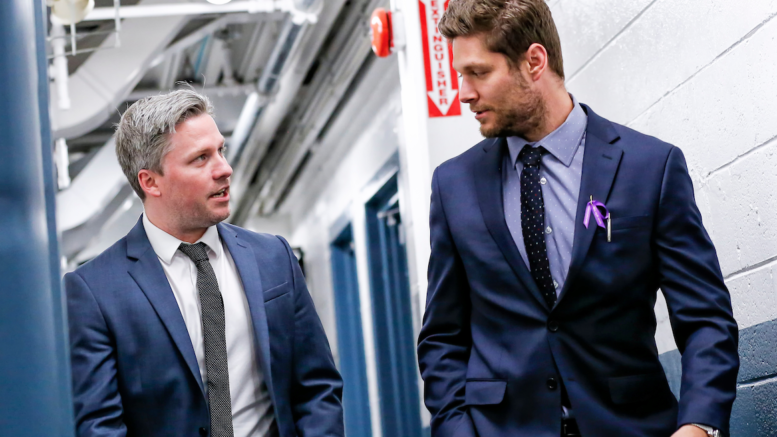 (Right) 2019-20 OJHL Coach of the Year Derek Smith speaks with assistant Sean Turner prior to an October, 2019 game against the Trenton Golden Hawks. (Amy Deroche/OJHL Images)

That’s how Wellington Dukes freshman Head Coach Derek Smith described accepting his Ontario Junior Hockey League Coach of the Year award amidst all the uncertainty in the world and the natural reflex that makes his mind believe the league’s best team in 2019-20 should still be out on the Lehigh Arena ice, grinding through another long playoff run.

After all, all ‘Smitty’ knows as a member of the Wellington Dukes organization is winning high-stakes hockey games in March, April and May

As a player and now as a coach, Smith lives and breathes the tradition of excellence in Wellington that was forged during the time of Garry Lavender and Marty Abrams and lives on through himself and General Manager Todd Reid.

In his first season as the organization’s bench boss, all the Belleville, ON native did was guide the club to the OJHL’s Brant Snow Memorial Trophy as regular season champions with a 43-9-2-0 record.

That record was Wellington’s second best ever-the high-water mark coming in 2002-03 when Smith was a third-year Duke patrolling the blue line for the 2003 Buckland and Dudley Hewitt Cup champs at their home in the frozen bathtub on Niles St.

Smith would parlay his time in Wellington as a player into an offer to join the NCAA Lake Superior State Lakers for three seasons and then a well travelled 10-year  professional career that included 94 NHL games with Ottawa and Calgary as well as stops in the KHL, AHL and the Swiss-A loop. Re-joining the organization in January, 2018 along with then-head coach John Druce, Smith cut his teeth running the defence for the 2018 Buckland and Dudley Hewitt Cup champions that ended up as Royal Bank Cup finalists in Chilliwack, BC.

In his first full season as an assistant coach in Wellington, the Dukes were 2019 Buckland Cup finalists.

So it’s safe to say Smith is familiar with the feeling on game day when the springtime sun battles with the nip of the wind off Lake Ontario in Wellington as the days grow longer and the stakes are raised every other night at the Dukedome.

Except for this season of course.

“Everyone has mixed emotions right now. We can look back on this season as an organization and be very proud and have absolutely no regrets about the way we went about our business. To end the season with under ten losses and have the second best record of all time in Wellington is very special,” Smith told the Gazette. “But seeing what’s happening in the world, I think every player on the roster appreciates the fact we were able to come to the rink and play a game and now, we are fighting as a civilization to get back to some kind of normalcy.”

Wellington ended the regular season with a 13 game winning streak and, combined with a four game sweep of Cobourg, a 17 game string was on the line for Game 1 of the Eastern Division Finals when the Dukes and arch rival Trenton were set to face one another.

“This season guys took pride in trying to get first overall and to keep the winning streak going as long as possible,” Smith said.

When Hockey Canada rightfully pulled the plug on the post season and before the gravity of the COVID-19 pandemic had set in, Smith said he noticed the younger Wellington Dukes were devastated for the players aging out of junior hockey with out some act of finality.

“Everyone appreciates what we are all facing and it’s the right call but guys were upset for those veterans. It’s one thing to be eliminated and have your junior career ended in a deciding game but to go out like this is a situation no one had ever thought possible until now- It’s hard,” Smith added.

When thinking about the circuitous route that started in Wellington as a player and has brought him back to the organization as an award-winning coach, Smith recalled some of the skippers that have influenced him on his journey as a player.

As a young 16-year-old coming out of the Quinte Red Devils AAA program and into junior hockey, Smith said Abrams preached playing the right way and being responsible to the program and each other at all times -whether it was a sweltering early September practice or a late March playoff game.

“Marty expected hard work and accountability from everyone on the roster and you learned a lot about bringing ‘it’ every single day and trying to get better and better. That’s how those teams were built and coached,” Smith said. “It was about development and improving yourself as a player and a person.”

In the professional ranks, Smith credited Troy Ward for introducing the defenceman to new techniques of coaching in an effort to make it back to the big league.

“When I got sent down to American Hockey League in Abbotsford from Calgary, that was the first time that I was really exposed to video and teaching on that level. There was more than just showing up, knowing what your role was and playing hard,” Smith said. “Troy was about showing how you can make the adjustments individually, breaking the game down into small segments and teaching from there. I look at that time as really helpful in understanding the game better.”

Both players and coaches have evolved for the years at all levels of hockey and Smith notices that a lot of skaters come through his door looking for constructive criticism that will help them get to their next level of hockey.

“Players always want to get better and improve and everyone in that dressing room is trying to figure out how to bring their game up,” Smith said

Smith was complimentary of General Manager Todd Reid and scouts Rob Ridgely and Don Cotton for their efforts to assemble the right mix of personnel.

“Reider, Ridge and Donny are always on the look out for not just good players but for good people. Guys who want to come to Wellington and want to invest emotionally into this program and what it’s always stood for,” Smith said. “We expect a lot of work from players and when they come here, they are treated well. Obviously we had some really good high-end talent come in this season but they engage and want to be here and wear the Wellington uniform. From there, it’s about us as a staff building the relationship and getting them to that next level and while getting the most out of them at this level.”