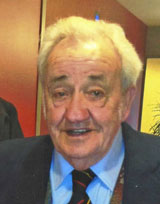 Peacefully in the early hours at West Lake Terrace on Friday March 27, 2020 Bill Thorley passed away after struggling with dementia and other health issues. Survived by his much loved and cherished partner Mary, pre-deceased by his wife Kay in October 2000 and survived by family in southern Ontario and England. Bill served in the R.A.M.C. in England, where he was born and in Canada with the Hastings and Prince Edward Regiment. Bill was an avid lover of anything to do with railroading and was the charter president of the local model railroad club and travelled many times to conferences meeting notable people such as Dustin Hoffman, Sidney Poitier and former Prime Minister Jean Chretien. In his career and business of painting he worked for celebrities such as the late Robert and Heather Urich and Burt Reynolds. As Bill requested there will be no visitation or service and cremation has taken place. Thanks to the doctors and nurses at PECMH and West Lake Terrace for the care Bill received. Arrangements entrusted to Arrangements entrusted to Hicks Funeral Home & Cremation Centre, 2 Centre Street, Picton. 613-476-5571 www.hicksfh.com