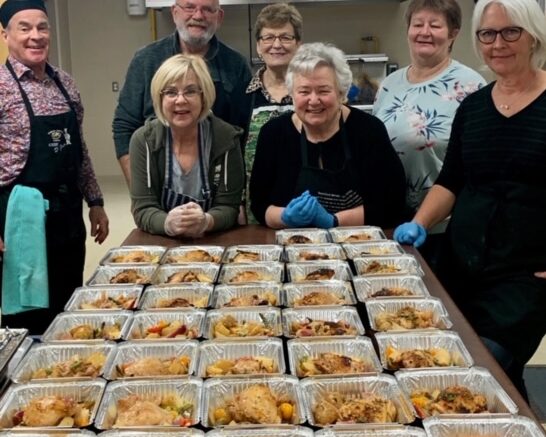 FOOD FOR ALL - Members of Food to Share prepare food earlier in the year for those in need (Submitted Photo).

For those experiencing the pangs of hunger due to COVID-19, an emergency fund of $100,000, known as the  ‘PEC Helps PEC COVID-19 Fund’ has been created to help soften the blow of food insecurity throughout the County.

The pandemic has already affected 44 per cent of Canadian households, with over one million people across Canada having applied for unemployment benefits due to the Coronavirus.

According to the Canadian Centre for Policy Alternatives, Canadians-like many others around the world-may be staring down the barrel of an unemployment rate not seen since the Second World War.

For County Residents, food insecurity has been a long-standing issue. No doubt this issue has ravaged families since time immemorial. However, there was little data to back that up.

According to Walton, food insecurity has been observed here since 2008. That’s when the first Vital Signs report was published and highlighted a variety of issues facing County residents.

“The County Foundation, founded in 2008 in response to perceived community needs, published its first Vital Signs Report in 2013. The report proved to be an uncomfortable read initially, providing evidence based data on various issues facing the County,” said Walton. “Included in those issues were Food Insecurity, Learning (Education performance), and Getting Around (Transportation). These were issues that the Foundation could address through its expertise and the generosity of its developing list of donors.

Since 2015, stated Walton, The County Foundation formed separate working groups to address the three main issues affecting the County. Each working group was comprised of local organizations and agencies capable of collaboratively addressing the the issues.

“Progress on the Learning issues and Transportation issues occurred faster than on Food Insecurity, and when the 2018 Vital Signs Report was launched, it indicated that the need on Food Insecurity had not moved,” commented Walton.

If family income levels are considered, Walton added, the level of food insecurity is actually much higher than 10 per cent.

“The root cause of food insecurity is poverty – inadequate income to pay the bills and provide essentials. People in poverty are often labelled poor. Some people, even fully employed, may be working poor, earning low wages and doing more than one job to survive,” said Walton.

With the County being burdened by a serious housing crisis and a spate of low-paying jobs, it’s not surprising, at the best of times, food insecurity affects so many here. Now, with the COVID-19 outbreak, the number of County residents affected by food insecurity is sure to grow.

“No one plans to be in this situation. It can happen to anyone. And then COVID-19 broke out, destroying health, lives, the stock markets, the economy, jobs, incomes, decimating the world we knew, within weeks or even days,” he stated. “ More people than ever before will be impoverished. More people will become food insecure. Initially, personal savings, family help, government assistance programs, and tax refunds may buffer the impact of being unemployed.”

Walton believes there will be a lag time before financial resources are depleted to the point where people require help with food, which is partially why the food insecurity fund needed to be set-up now.

“We’d like it to become much more, because we know the needs will grow. We know the Food Bank capacities will be surpassed once the lag time has passed, and there will be a demand for help in supplying an expanding list of people who become food insecure,” noted Walton.

The County Foundation is just one of a number of agencies involved with confronting the issue of food insecurity. Some others include: Prince Edward Learning Centre, Food To Share, Picton United Food Bank, Storehouse Food Bank, Wellington Food Bank, Hastings and Prince Edward Public Health and the County Food Hub.

The municipality has also recently organized a Food Insecurity Task Team, consisting of Councillors Bill Roberts, Kate MacNaughton and John Hirsch. The task team has joined forces with the Food Collective to approach the issue of food insecurity together.

“The Food Collective formed to conduct a nine month Community Demonstration project in 2019 under a grant from the Rural Ontario Institute. That project and its successful conclusion has positioned the Collective to respond to the current need,” said Walton. “That need is to have a plan in place to provide a rapid deployment supplementary food service for if/when the Food Bank capacities and capabilities are exceeded. In plain English, another operation at a location away from existing Food Banks and supplying food as needed, including deliveries across the County. This project is now underway, with Task Team members at the Food Collective on-line meetings, and communications taking place on an hourly basis.”

“We have reached out for help, for donations, through ads, Facebook postings, a Grapevine broadcast, and newspapers. Such is the importance of this Fund among many other local requests. Health is the currently the number one issue. Food will be next,” Walton stressed.

For those wishing to learn more about the PEC Helping PEC COVID-19 Fund, or to donate, please visit: https://thecountyfoundation.ca/covid-19-fund/ .