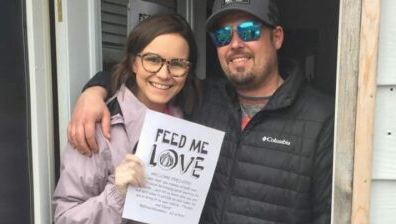 FEED ME LOVE- (L-R) Erin Kimble and AJ Johnston are the faces behind the free food project. (Submitted photo)

When Prince Edward County needs it most, Feed Me Love- a local food project- has stepped up to the plate offering free meals each Sunday.

The couple behind the brand are named Erin Kimble and AJ Johnston. They provide soul food to anyone in need, and so far, have served a variety of people from farmers to health care workers.

After the rush of this past Sunday, Johnston took some time to speak with the Gazette about their endeavour.

“Fortunately we haven’t had to say ‘no’ to anyone yet! We have served many health care workers, families in need, hospitality staff, farmers, essential retail workers, and other local residents. I only use Instagram and email to communicate, so it’s been a very organic growth for us. Word of mouth is a powerful thing,” explained Johnston.

They began their project as a way to feed restaurant workers who may have been laid off due to the COVID-19 crisis. That quickly evolved and now many local food partners have been involved in this endeavour-from a safe distance.

“I had the idea to feed local restaurant workers once the local dining rooms began to close and employees started getting laid off. I thought they might appreciate a home cooked meal on a Sunday evening, as that is the day I usually cook a big meal. My intent was to provide 20-30 meals. That quickly turned into 50, then 90, then 130!Feed Me Love is myself and my partner, Erin Kimble. She helps me prep, serve, clean, etc.” said Johnston. “She’s also the more organized, level headed half of the team – she keeps me grounded when I get stressed. I wouldn’t have been able to pull any of this off without her. Further, while I’ve had many generous offers of assistance, we are practising social distancing and have had to politely decline any in person assistance.”

The support they’ve received from the community is considerable. This past week, Kaleidoscope: A Movable Feast, donated 120 bacon jalapeno cheddar buns and Raising A Village-Quinte baked 120 whoopie pies.

On top of donations, Hops and Heifers along with Ralph’s Meat Market provided wholesale pricing for meat.

“We’ve also received many donations from local residents, friends and family members to help cover our out-of-pocket costs of these meals,” expressed Johnston.

As he states, these meals are available to “anyone who would like a nice Sunday evening dinner.”

When asked what the inspired him to embark on this labour of love, Johnston commented that he had wanted to embark on a culinary project, albeit not immediately. Like many things, the pandemic somewhat altered the nature and delivery of his vision.

“Feed Me Love was just a name I had swirling around my head for a culinary brand, with no specific direction in terms of what it would be. I wanted to create a brand that I could use to do different culinary projects with, whether it be private parties, cooking demonstrations (You tube), possibly pop-ups or takeovers etc.,” he said. “Because I work full-time, I had no plans to get this off the ground now, but the timing seemed right and given the circumstances, the name seemed fitting. I don’t have any immediate plans to turn this into a business as I don’t have a commercial space to cook in, or the capacity to store product. For now it’s just a “feel good” project that allows me to give back to this amazing community.”

Like many who find themselves in the County, Johnston’s past is varied. Having worked as the Director of Hockey Operations at the Professional Hockey Players’ Association, he switched gears at 30 to become a chef. After working in the restaurant business for seven years, he decided to move to the County with his girlfriend and embark on a career at Floortrends in Belleville.

“I was a chef for 7 years after leaving the Professional Hockey Players’ Association where I was the Director of Hockey Operations,” said Johnston. “ I left at 30 to chase the dream of becoming a chef. I like to refer to this period of my life as “chasing the dream, living the nightmare.”

Johnston quickly climbed the culinary ladder, beginning-as many do-as a dishwasher at a golf course and within a year being promoted to sous chef.

For anyone who has worked in a kitchen before, they know it takes a particular kind of endurance. Johnston described working long hours under mental and physical duress.

“It was hot, as well as being physically and mentally draining. I hated it, but loved it at the same time,” revealed Johnston.

“About a year after that I was hired as the head chef of a pub near my former home in St. Catharines, which was a blast. I got to create my own menu and do some really fun things with the small kitchen we had. I then had to move back to my home town due to finances, and landed a job as the head chef / kitchen manager of a much larger operation,” said Johnston. “From there I got a gig as the Executive Chef of a boutique hotel and was producing some of the best food I had ever created. Slowly, I started to burn out and my passion for the profession was dwindling. Cooking other people’s menus, working crazy hours, and getting paid peanuts was taking a toll on me mentally and physically. “

This changed when Johnston and his girlfriend moved to Picton and he instantly fell in love with the area.

Johnston has been cooking for a long time but volunteering even longer. He describes his move to create Feed Me Love as a natural progression of these two things.

“I’ve been volunteering since I was a young child, so this was a natural progression. I get to make my own menu, my own hours, and enjoy cooking without so much pressure. Food has always brought people together, so this seemed like the right time to launch Feed Me Love,” he iterated.

Of course, there have been challenges to this endeavour. All the more reason why this is a labour of love.

“The main challenge is space. I only have one oven and one fridge. I had to bring in 2 small induction cookers for this last meal, and employ the slow cooker when I can. A lot of the time I have to purchase refrigerated products the day of, and get cooking immediately. This can be very stressful when you need something to cook for 5-6 hours, but have to wait for the store to open, wait in line, etc. I try to utilize my oven overnight to assist with issues like this (ie. roasting pork shoulder for 14-16 hours at a very low temperature).” noted Johnston.

“This way I don’t have to take up space in the fridge. I also follow safe food handling guidelines which can be a challenge with the equipment and space I have,” he explained. “Fortunately, having operated this way for so many years, it’s more second nature than effort. And at the end of the day, if I can’t prepare something properly, I just don’t prepare it. I improvise with something I can prepare safely.”

From water buffalo ragu (or vegan mushroom ragu) to pulled pork and mac ‘n cheese, the pair have so far cooked for the public on three different Sundays. They began by serving 50 meals, but this last Sunday reached 130. All told, they’ve handed out 270 free dinners for those in need.

Johnston and Kimble source their ingredients locally as much as possible, availing themselves of the water buffalo at Hops and Heifers, meat from Ralph’s Meat Market, and local grocery stores for produce etc.

“One of the things I love the most about the County is all of the farms and local purveyors. I would have purchased my produce from local farms, but we’re a little early for that now. It’s so great having so many amazing producers in such a small vicinity,” said Johnston.

Feed Me Love operates through contact-less pick up, which Johnston describes as being a far cry from meeting the people you’re feeding in person. Nonetheless, he says, social media has managed to pick up some of the slack, with people connecting over this food via Instagram.

“The only downside is we don’t really get to interact with people face to face. We say hello through our door and will bring meals to their vehicles when it’s raining, but we do contact-less pick up, so aside from hello and you’re welcome, there isn’t a whole lot of getting to know the people we’re feeding,” he said. “ Social media certainly picks up the slack in this regard, but it’s not the same as meeting people and actually conversing.”

Most importantly, the reception from the public has been, as Johnston said, incredible.

“Everyone has been so appreciative and complementary. It’s been a really positive response in such a trying time. Many folks have said how much they look forward to their meals which warms our hearts and makes all of the hours we put in worth while,” noted Johnston. “That being said, I’m my own worst critic, so I’m constantly wishing I did this and that a little differently. I never seem to be satisfied with what I’m serving, but everyone else seems to be so that’s what counts!”

Those interested in some comfort food from Feed Me Love can email Johnston and Kimble at: feedmelovepec@gmail.com or they can message the pair on Instagram.