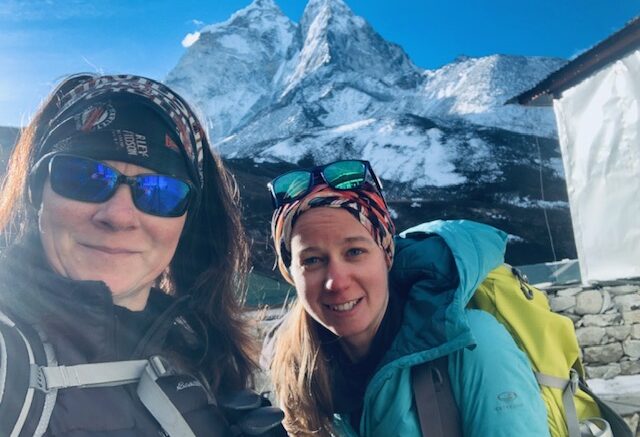 IN THE MOUNTAINS - (L-R) Mollie Sitwell and friend Andrea Van Ogtrop were scaling Mount Everest when Nepal went into lock down. (Submitted Photo)

It could be argued that local resident Mollie Sitwell is no stranger to adversity, having recently scaled part of Mount Everest. So, when Sitwell found herself stranded in Nepal weeks after her Himalayan trek began, she was determined to get back home-despite the country being in lock down.

Luckily for her, Sitwell touched down on Canadian soil on April 6th and was able to speak with the Gazette from the comfort of her own home, where she is self-isolating.

She had embarked on her journey on March 11th, with friend Andrea Van Ogtrop. The two had planned a trip to the base camp at Mount Everest as part of a way to commemorate their late fathers. Each had died on the same day nine years apart.

“My girlfriend, a former student who now is a friend of mine, and I decided to go a couple years ago and the timing revolved around the anniversary of both our father’s deaths,” said Sitwell. “Our Dads died the same day nine years apart, so part of our trek was during that time and we had a little commemoration memorial for our Dads at Everest Base Camp.”

Sitwell is careful to note that only professional climbers scale the entirety of Everest. For many, their trek will take them to the base camp.

“We did the route that goes through the Gokyo Lakes. It’s a bit of a circuit. The highlight for us was getting to Everest Base Camp,” said Sitwell. “ A lot of people mix that up. Only professional climbers climb Mount Everest but a lot of people go to the base camp.”

Many Canadians will remember the sweeping statement from Prime Minister Justin Trudeau at the end of March, urging all Canadians to come home. At the time, Sitwell was still on her Himalayan trek, where most of the available news was European.

Her daughter, Brianna Wolters, watched from home while Nepal effectively closed their borders and shut down international flights.

“I think we officially found out on March 20th when Nepal announced their airport was closing, but it was too late for her to get down the Mountain fast enough to catch the final flights,” said Wolters.

Once Sitwell had emerged from the mountains on March 29th she, along with many foreigners, found themselves stranded in Nepal, having learned that government closed all international airports and banned commercial flights.

“We got stuck because toward the end of March, the Nepalese Government closed the international airports. They no longer allowed commercial flights in our out so there’s no way for any tourist to get out of Nepal unless a diplomatic repatriation flight comes in,” Sitwell stated.

Much to her chagrin, Sitwell was unable to find a flight home. The Canadian Government had evacuated Nepal and closed the embassy.

Because the Canadian Embassy in Kathmandu-Nepal’s capital-was closed, Sitwell effectively could not arrange a repatriation trip home, despite contacting numerous Canadian diplomats.

And, at home, Wolters struggled to find a way to help bring her Mother home.

“It was difficult. I didn’t really know who to turn to. I had sent emails to the government, but it wasn’t until I posted on social media that a friend of mine had a connection with a reporter at Global News that I was actually able to make some noise on the situation,” said Wolters.

Both Wolters and Sitwell described a state of shock that set in once they realized the Nepalese Government had closed the international airports and that numerous tourists would be stranded.

“I was in shock. Who gets told that an international airport is closed? I’m a very resourceful person, so I was determined that nobody was going to tell me I couldn’t go home to my family,” described Sitwell. “I just set about figuring out how the to get out.”

Apart from the challenge of finding a flight home, Sitwell had to get used to life under lock down in Kathmandu, an area somewhat leery of tourists and their potential to spread disease.

“The lock down was weird because we don’t speak the language and that was odd. In Kathmandu, the lock down is such that you’re allowed out at night between 5 p.m.- 7 p.m. to get groceries or food. But, our hotel really didn’t want us to do that. The hotel we were in was very strict,” Sitwell explained.

Because her father was European and she holds a European passport she initially had tried to get on a German plane out of the country. Sadly, this was to no avail.

The stranded Canadian did, however, did find success with the American Embassy.

“My Mother is American so I called that embassy twice a day. Despite the fact we were on lock down, I walked to the embassy, and even got stopped by military police twice,” recounts Sitwell. “I told them ‘I need to get home’. Then, my friend and I were invited to get on an American Flight taking the two last seats.”

When asked whether or not she was in contact with the other foreigners looking to return home, Sitwell replied that many communicated via a Facebook group and the well-known Whatsapp.

“There’s a Facebook and Whastapp Group but to be honest, they’re not very positive. The Canadian Government has said it would be a lot of money to get home, about $3,000. So a lot of people were really negative,” expressed Sitwell. “I was glad to get out and leave that group because I found there was a lot of complaining going on. I went to Nepal because I was eager and excited to go. Now, the world has gone a little crazy. I wanted to get home but I didn’t feel the Canadian Government had to take it upon themselves to get me home.”

As of her last day in Nepal, many other Canadians were still waiting in hopes of a flight home.

For Sitwell, the trip home to Canada was remarkably easy, unfettered by the mounting fears caused by the COVID-19 crisis.

When the pair touched down in Washington D.C., they easily moved through customs. In Toronto, Sitwell stated they were greeted with a detailed document as to the new guidelines all Canadians must follow.

Now, they are free to self-isolate like many of us-facing this pandemic alone but together.