“Where are you guys down from?” was the question posed to the unfamiliar faces at the end of Edwards Drive near Consecon as big fat snow flakes flew across a windswept and frozen nearby Weller’s Bay.

“We drove down from Barrie in the night to be on the ice first thing,” came the response.

This was a scene played out a couple of years ago on a dark and snowy Sunday morning as your humble scribe had assisted a duo of touring ice anglers in the depths of a frozen late January day free their car that had been snarled by a snow drift.

I commented that’s a heck of a trip to take when there’s snow in the air and the temperature was in the minus 20’s.

“Yeah but we heard they were biting and this was the only day we could get down here.”

With the car liberated from the clutches of wintery scourge and pleasantries and good wishes exchanged, the anglers went on about their way and whether the fishing gods blessed their trip, I can’t say with any degree of certainty.

The point of posting this little back-and-forth this week is to further illustrate the lengths and depths to which those looking to hook a walleye in one of the best fish factories in North America will go and why the municipality’s decision to back track and keep its public boat launches closed during the COVID-19 pandemic is a sound one.

There are good and responsible anglers that understand social distancing and knocking off non-essential travel are key to flattening the curve of COVID-19. They reconize the rods can stay packed up and the boat needs to stay sitting in the driveway until there’s a break in the daily announcements from Premier Doug Ford and society can return to some semblance of normal.

Then, there are the others. Here’s betting the ones that will travel from well outside Prince Edward County to go out on three or less inches of ice in December to chase a walleye are likely the same ones that would recognize that requests to stay at home and self-isolate are, at this time, requests. And that these pleas don’t apply to them as long as there are less than five people in their boat and they don’t talk to anybody at the launch.

I know these people and their attitudes exist because social media offers a window into even the dimmest and dullest of minds. If you don’t think there are those who are fervent in their conviction to get their boat in the water and go fishing despite requests to the contrary from Medical Officers of Health, the OPP, the Government of Ontario and just about everyone else, I hate to be the bearer of bad news.

Trust me when I say these same people had already noted over the weekend the County of Prince Edward was keeping municipal boat launches open.

Even if there was an ultimate degree of certainty municipal boat launches were only going to be used by local anglers, it would still be too risky a venture at this stage of the pandemic to allow them to remain open.

With launches closed in Belleville, Quinte West and Napanee, the only logical and reasonable choice of Prince Edward County Mayor Steve Ferguson was to rescind an earlier directive and announce recreational and sport boating wouldn’t be facilitated from municipally owned and operated launches. It was the right call in a series of right calls and proper course corrections in an ever-shifting landscape and that level of sound and adaptable leadership during the COVID-19 pandemic is noted. 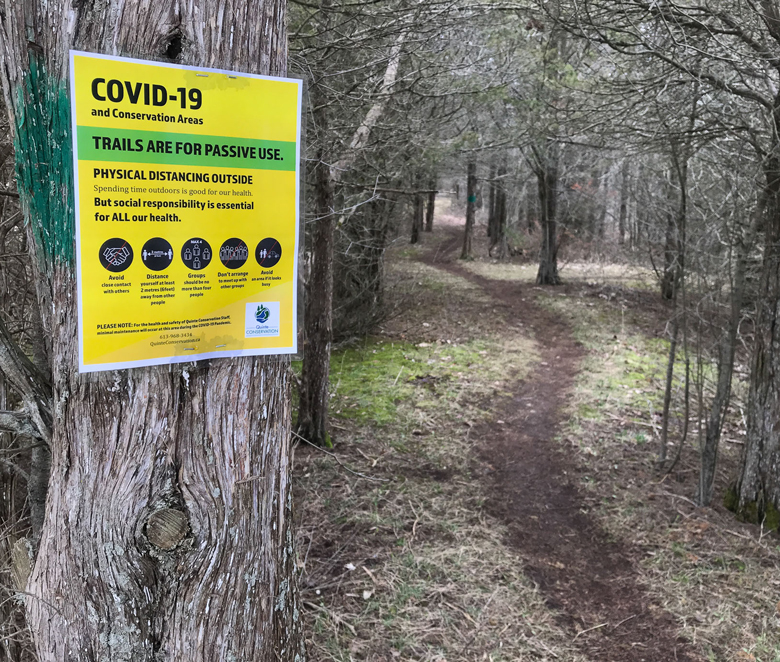 NO BLUFF Gazette reader Phil Norton reminds us Sunday is the 50th anniversary of the first Earth Day and that you can still take a walk on the wild side in most of Quinte Conservation’s parks. Warnings about social distancing due to the COVID-19 pandemic are posted at the parking areas shown here at Little Bluff Conservation Area. The usual parking fee of $5 is being waived through the month of April but you can still support their Adopt-An-Acre program and learn more about nature: www.quinteconservation.ca. Have a photo you have taken in Prince Edward County you want to share with our readers? Email it to us at gazette@bellnet.ca (Photo by Phil Norton)