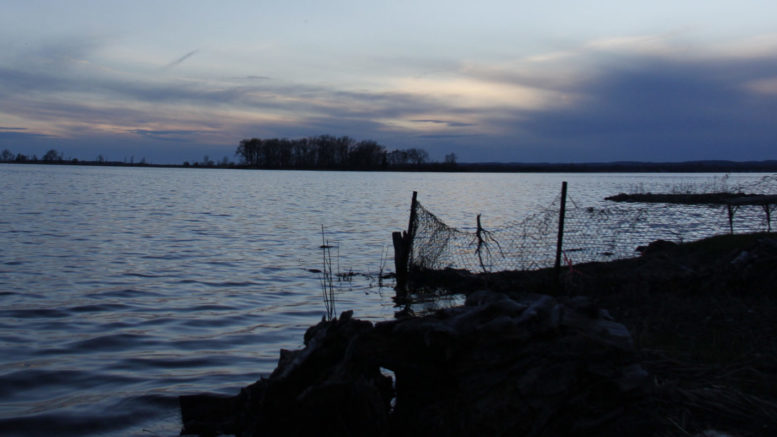 With the arrival of spring and the melting of snow, water levels in the Bay of Quinte region have been on the move. On March 27th, Quinte Conservation (QC) issued a flood outlook statement and, as of this week,  a flood watch remains in place.

According to QC, a flood outlook statement is more preliminary in its level of precaution. In other words, it gives early notice of the potential for flooding based on weather forecasts that may call for heavy rain, high wind or other conditions that could lead to high runoff, causing ice jams, lake shore flooding or erosion.

In comparison, a flood watch notifies residents of the potential for flooding within specific watercourses and municipalities. A flood watch warns municipalities, emergency services and individual land owners that flood prone areas should prepare for the possibility of flooding. 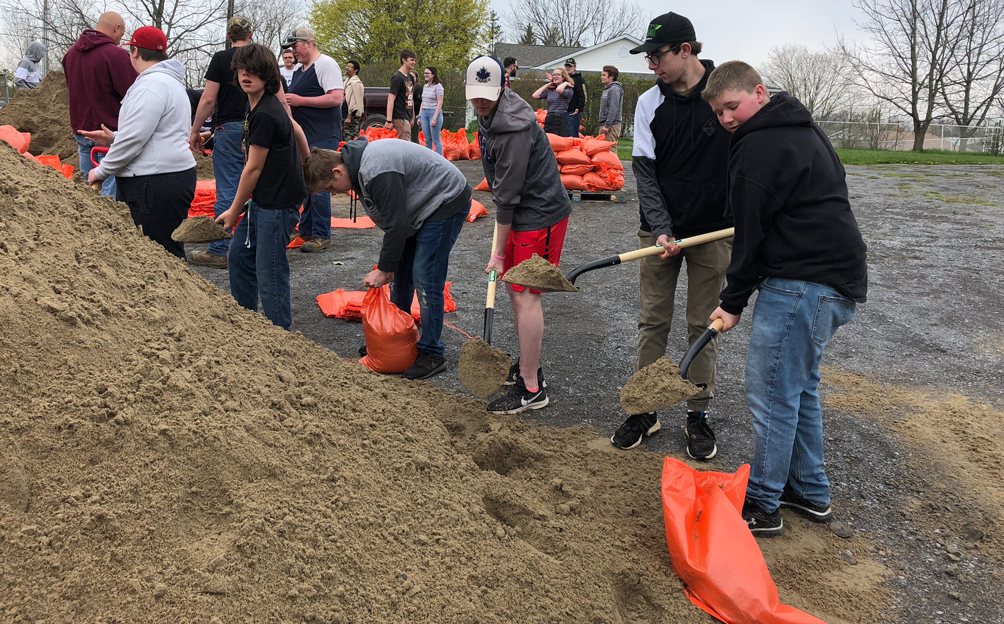 PECI students work shovels and sandbags at the Johnson St. soccer pitch parking lot. Last year, secondary school students pitched in and filled sandbags for shoreline residents who are unable to fill their own sandbags at the stations throughout Prince Edward County. (Jason Parks/Gazette Staff)

The local flood watch concerns both the Bay of Quinte and Lake Ontario within the QC jurisdiction.

The waterways of the upper Great Lakes, such as Lake Erie, greatly affect the water level of Lake Ontario. To help explain this, Christine McClure, Water Resources Manager at QC, spoke with the Gazette.

McClure noted the primary mechanisms for removing water from Lake Ontario are outflows into the St. Lawrence River and evaporation.

McClure added dry spells and corresponding warm weather can help to mitigate rising water levels, with two-thirds of precipitation lost to evapotranspiration annually, according to the 2006 Conceptual Water Budget for the Quinte Region.

Farther afield from QC, the International Joint Commission (IJC) is warning residents that live along Lake Ontario to be vigilant, as the flood risk remains elevated.

“Lake Ontario’s seasonal rise has begun, and will generally continue in the coming weeks. Residents and communities along Lake Ontario should remain vigilant and continue to make preparations for potential impacts of high water this spring, as the risk remains elevated, particularly during periods of strong winds and waves,” wrote the IJC.

Though there is currently a flood watch for the region, the IJC maintains there is also a level of uncertainty as to what the season will bring.

“There remains considerable long-term uncertainty for peak levels that will be reached this season, both upstream on Lake Ontario and downstream in the lower St. Lawrence River,” they wrote. “Water levels will largely be determined by precipitation, inflows from Lake Erie and from the Ottawa River system over the next several weeks.”

For more information about the local risk of flooding, please see: www.QuinteConservation.ca.