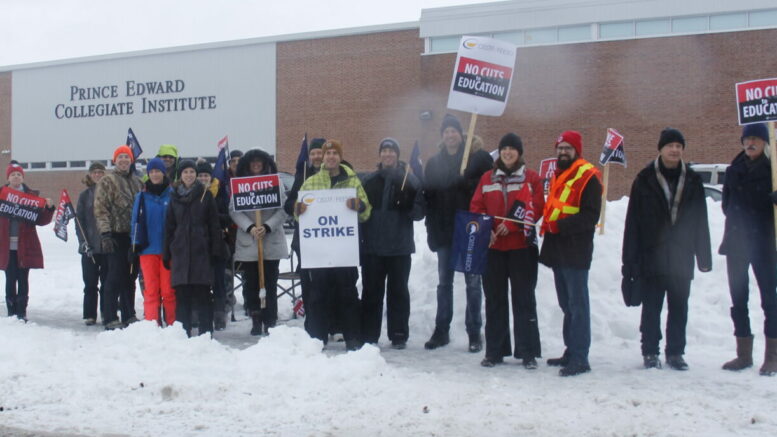 Protests by local educators are a fleeting memory with the announcement a tentative agreement between the Ministry of Education and the remaining holdout union, the OSSTF, has been struck. (Desirée Decoste/Gazette Staff)

The final piece of the education labour peace in the province of Ontario fell into place earlier this week.

On Monday,  the Ontario Secondary School Teachers’ Federation (OSSTF) announced it had a reached tentative agreement with the Ministry of Education at the  central bargaining table. The Secondary School teacher’s union was the last holdout after an acrimonious period of education labour strife that populated the 2019-20 school year with protests and service withdrawals.

Whenever students do return to the classroom after the COVID-19 pandemic, labour disruptions and work-to-rule actions will no longer be a part of the day-to-day educational experience.

“These are extraordinary times. When we began negotiations nearly a year ago, no one could have anticipated the situation we face today,” said Harvey Bischof, President of the OSSTF in a statement. “Our main priority has been to protect the education system by reaching a deal that respects our members and ensures students get the best education possible. We thank our members for their support, solidarity, and sacrifice during these many months of negotiations. Our union remains stronger and more united because of their demonstrated commitment on the front lines across this province.”

The OSSTF were the first teachers union heading to the picket lines starting one-day rotating walk-outs in early December.

In recent months, tentative agreements with three other teacher unions including the Elementary Teacher’s Federation of Ontario and the Ontario English Catholic Teacher’s Union have already been signed.

Minister of Education Stephen Lecce said the government was seeking a deal with the unions representing teachers and education workers that would advance the priorities of students and parents.

“That is exactly what we have done by reaching deals with every education union in this province,” Lecce said.

The details of the tentative agreement were not released Monday but the education unions have had clauses in their contracts that ensure any negotiated increase in compensation or other substantial gains will be shared by all. But the union’s 60,000 members could possibly vote on the tentative deal early next month.

“With the support of the public and our members, we mounted a strong public awareness campaign that highlighted the government’s dangerous approach to education,” Bischof stated. “As a result of our combined efforts, this government, although early in its term and holding a majority, was pushed back from some of its most egregious proposals. While this tentative agreement does not satisfy all of our concerns, we recognize the current environment we are in and the need for students to have stability once this emergency is over.”

OSSTF’s local leaders from across the province will meet via teleconference in the coming days to review the tentative agreements and determine, according to the union’s established processes, whether or not to forward them to the membership for a ratification vote. Member ratification votes are tentatively planned for May.

“We will continue our advocacy to protect the world-class education system we’ve been instrumental in creating. Our members and our students deserve that never-ending effort,” declared Bischof in a statement. “Even now, educators continue to do their best for students during this crisis and look forward to welcoming them back to the face-to-face support we know is best for most students.”